—Literature Available— As another element of safety of vessels at sea, all ships of more than 300 grt must be equipped with one of the relatively new Navtex receivers by February 1, 1990. Navtex is a 24-hour warning system that transmits a broad range of navigational and weather information relevant for all types and sizes of ships.

In the U.S., Navtex coverage already exists in New England and the Gulf of Mexico. The Coast Guard expects to have national coverage in place by the end of 1989.

Shipmate is keeping on top of these developments by offering a new and advanced Navtex Receiver.

The RS-6100 Navtex receiver from Shipmate has only four control keys to insure simple, reliable operation.

All additional functions are performed via a printed menu that describes required operator responses.

It provides the full range of weather and safety information automatically with free choice of transmitter stations. The RS-6100 also features a "silence" function so that the latest and most relevant information may be printed at the convenience of the operator. Both the paper and the keyboard are illuminated for easy nighttime operation and an internal battery protects stored data for as long as five years. The RS-6100 consumes very little power, having an economy function in which it only uses 1W.

Other features include built-in audible and visual alarm, end-of paper alarm, along with an easy touch keyboard with light and dimmer and a 40-character thermal printer with 131-foot paper capacity.

The RS-6100 is ruggedly constructed of impact-resistant polycarbonate and may be mounted in virtually any convenient location. A snap lock enables quick removal, a great feature for smaller yacht owners. 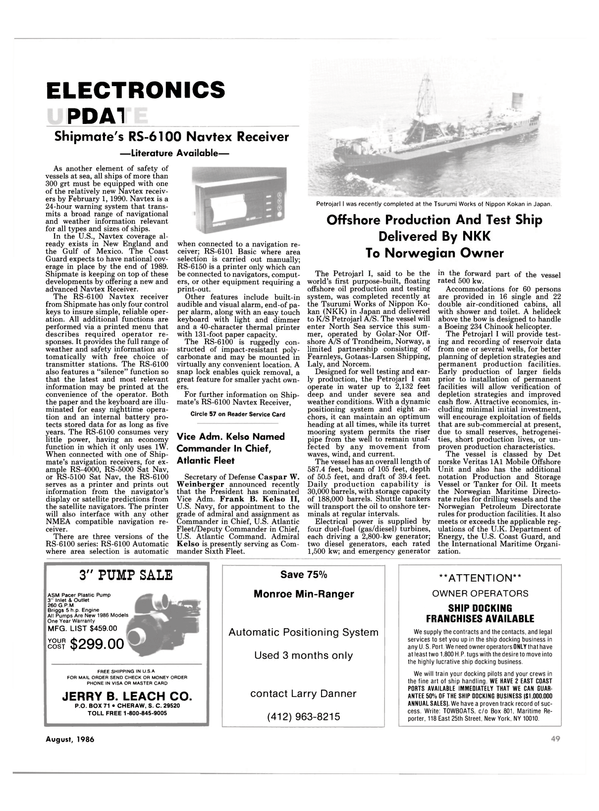