South Korea is the latest nation to land an order for the building of the ship type known as the pure car/ truck carrier (PC/TC). Daewoo Shipbuilding, one of Korea's newest and most versatile yards, has entered the growing car carrier building market with an order for construction of two 5,250-unit PC/TCs for Ugland, one of two Norwegian partners who constitute the Oslobased HUAL car-carrying consortium.

The ships' internal layout, particularly with regard to the positioning of the many adjustable ramps, was the subject of exhaustive study. Designed to achieve the most efficient routing for wheeled cargo, the solutions were arrived at with computeraided design (CAD) assistance.

The hydraulically operated quarter stern ramp/door, articulated into three sections, will open to angle at 35.5 degrees to the ship's center line and be hinged to the ship at Deck 5. Designed to sustain a unit load of 150 tons, it doubles as a watertight door closing the stern opening.

The hydraulically operated side ramp/door is in two sections including flap. Hinged at Deck 5 (but adjustable to give access to Deck 6), it is designed for a maximum load of 22 tons, or an axle load of 13.6 tons on four wheels.

The nine hydraulically operated internal ramps are designed to stow horizontally, flush with the surrounding deck, and to sustain the same loading as the deck. Ramps stowing on Deck 7 close to form a gas/watertight seal, while those on Decks 3, 9, and 11 are gastight only.

All equipment will be designed, built, and fitted to comply with the construction and safety standards required for classification by Det norske Veritas. In addition to onsite control, all equipment maneu- vering indications are duplicated in the wheelhouse.

The fact that these ships are designed for cargo-carrying versatility is indicated by the four integral decks being capable of sustaining three, six, and in the case of Deck 5, 12 times the weight of the car; and also by two key items of MGN access equipment—the four liftable car decks and the 150-ton-capacity stern ramp. A further indication of preparedness for a carry-all role is the fact that HUAL is to deploy the ships on round-the-world routes when they are delivered in the first and second quarters of 1987. 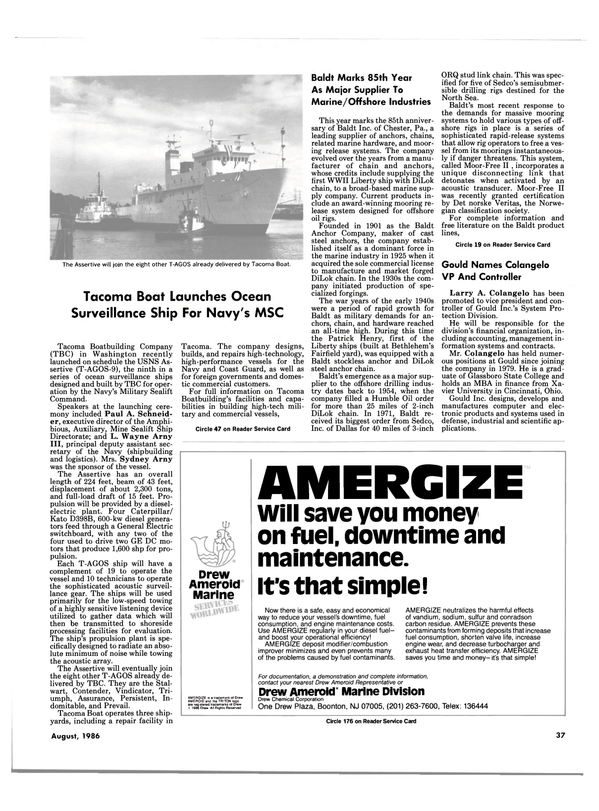