Tacoma Boatbuilding Company (TBC) in Washington recently launched on schedule the USNS Assertive (T-AGOS-9), the ninth in a series of ocean surveillance ships designed and built by TBC for operation by the Navy's Military Sealift Command.

Speakers at the launching ceremony included Paul A. Schneider, executive director of the Amphibious, Auxiliary, Mine Sealift Ship Directorate; and L. Wayne Arny I I I , principal deputy assistant secretary of the Navy (shipbuilding and logistics). Mrs. Sydney Arny was the sponsor of the vessel.

The Assertive has an overall length of 224 feet, beam of 43 feet, displacement of about 2,300 tons, and full-load draft of 15 feet. Propulsion will be provided by a dieselelectric plant. Four Caterpillar/ Kato D398B, 600-kw diesel generators feed through a General Electric switchboard, with any two of the four used to drive two GE DC motors that produce 1,600 shp for propulsion.

Each T-AGOS ship will have a complement of 19 to operate the vessel and 10 technicians to operate the sophisticated acoustic surveillance gear. The ships will be used primarily for the low-speed towing of a highly sensitive listening device utilized to gather data which will then be transmitted to shoreside processing facilities for evaluation.

The ship's propulsion plant is specifically designed to radiate an absolute minimum of noise while towing the acoustic array.

The Assertive will eventually join the eight other T-AGOS already delivered by TBC. They are the Stalwart, Contender, Vindicator, Triumph, Assurance, Persistent, Indomitable, and Prevail.

Tacoma Boat operates three shipyards, including a repair facility in Tacoma. The company designs, builds, and repairs high-technology, high-performance vessels for the Navy and Coast Guard, as well as for foreign governments and domestic commercial customers. 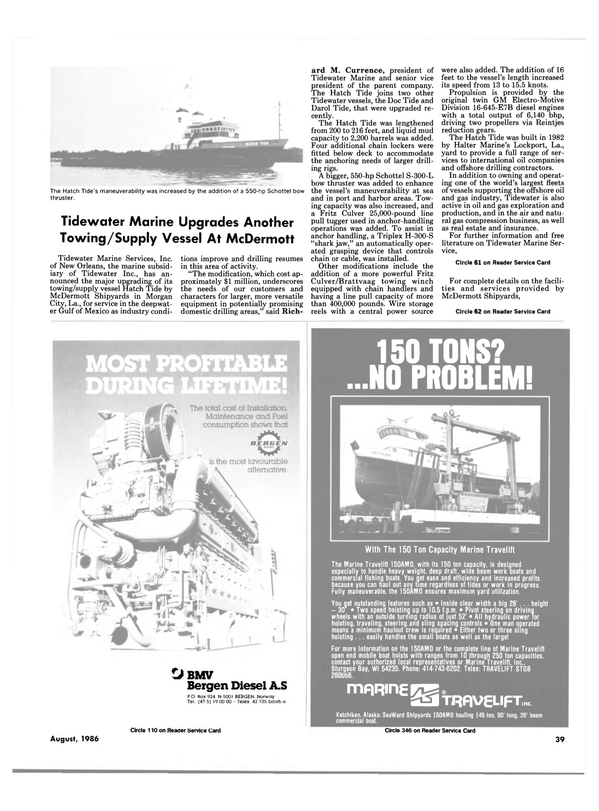