— F r e e Literature O f f e r e d— The Walter S. Diehl, T-AO-193, the fifth in a series of seven fleet oilers under construction at Avondale Industries' Shipyards Division, Avondale, La., for the U.S. Navy, was recently christened. She is scheduled for delivery to the Navy in 1988.

Diehl, daughter-in-law of the ship's namesake, served as the ship's sponsor.

Other speakers at the christening were: the Honorable John A. Pendergrass, Assistant Secretary of the Occupational Safety and Health Administration (OSHA), U.S. Department of Labor; Paul A.

The Walter S. Diehl is 667V2 feet long, 97 V2 feet wide and has a maximum draft of 36 feet. She is pow- ered by twin 10-cylinder, mediumspeed PC4.2 Colt-Pielstick diesel engines, which produce 16,300 hp each. She will have a service speed of 20 knots. The oiler's twin-screw propeller design provides improved directional stability, ease of control and mission reliability under combat conditions.

The mission of the Walter S.

Diehl, as well as her sister ships of the T-AO-187 Class, is the transportation of bulk products from sbore depots to combatants and support forces under way. The oilers also deliver limited fleet freight, cargo, water, mail and personnel.

Cargo-underway-replenishment is accomplished using transfer rigs with transfer hoses suspended by a span wire that is automatically maintained in a constant tension range. The T-AO 187 Class vessels are also capable of refueling helicopters from a vertical-replenishment facility aft of the accommodation house.

For free literature on the shipbuilding and ship-repairing facilities and services of Avondale, C i r c l e 2 0 on Reader Service Card 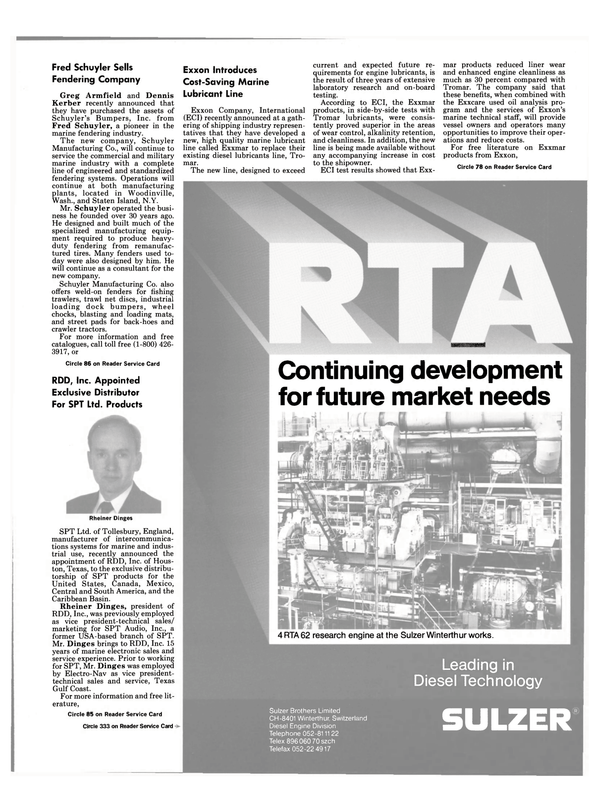