St. Philip Towing of Tampa, Fla., recently announced that the company has closed with the U.S. Maritime Administration on the purchase of two "trac"-type tugs that had been under construction in Texas.

Bay Transportation, owned by George M. Steinbrenner, purchased the assets of St. Philip Towing at year-end 1986 and continues to operate the 23-tug fleet under the St. Philip name.

Instead of conventional positioning of the propulsion system at the stern of the vessel, the twin screws are mounted in an assembly suspended below the vessel's hull about 30 feet from the bow. The propulsion assembly can rotate in a full circle, enabling the thrust supplied by the twin diesel engines to be applied in any direction.

The trac-type design, which has become common in European ports in the last decade, provides tugs with greater maneuverability in positioning huge ocean vessels at harborside berths and in narrow port channels.

The two 194-gross-ton tugs will be powered by twin B&W Holeby diesels.

One vessel is 90 percent complete and can be fully operational within 120 days; the other is about 50 percent complete with much of the equipment and fittings remaining to be installed. The American Ship Building Company's Tampa shipyard is expected to complete both tugs. 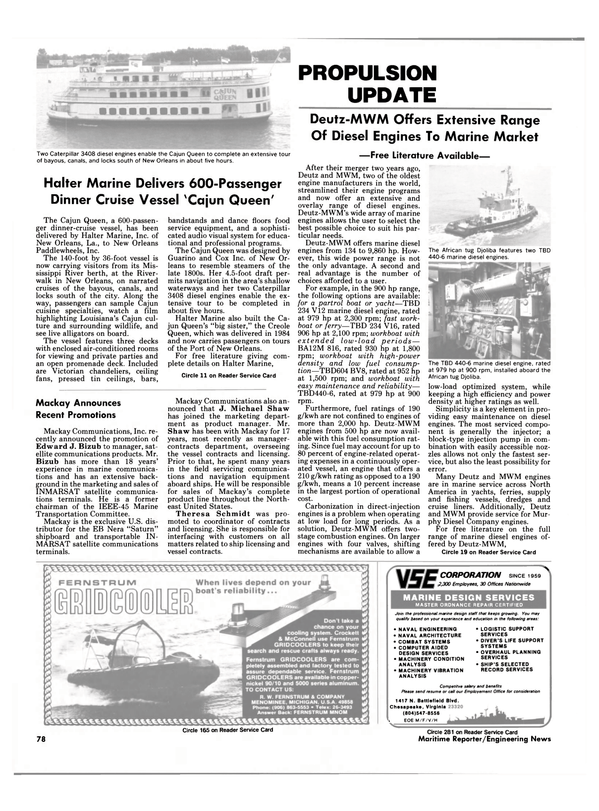