In an address to the National Convention of the Propeller Club of the United States recently, Joseph Farrell, president of the American Waterways Operators, called for the Republican and Democratic party platforms to include a plank to rescue the U.S. merchant marine.

"Few issues face the next President which are more ominous or more riveting, than the future of the American merchant marine," Mr.

The national barge and towing industry association's leader outlined a number of problems currently plaguing the U.S. merchant marine, including the effect of the budget deficit on the industry, absence of maritime focus in the Congress, federal regulatory excess, and the lack of consensus on maritime policy that is evident in both the federal government, and within the industry itself.

However, he emphasized that the lack of Presidential leadership over many years has been the chief cause of erosion in the nation's maritime assets.

"I believe the real problem has been the absence of a clear and firm resolve by the sitting President of the United States," Mr. Farrell said. "The essential precursor and precondition to executive branch leadership is a focused commitment by the President to rescue the U.S merchant marine," he said.

Mr. Farrell said that the lack of genuine Presidential resolve concerning the merchant marine has led to "an executive branch of government in disarray." As an example, he pointed to the Administration's wide internal disagreement on the effects of the new U.S.-Canadian Trade Agreement on the American merchant marine.

While Mr. Farrell did not himself propose a comprehensive maritime policy for adoption by the Republican and Democratic parties, he did offer three suggestions for inclusion in a platform plant to enhance the nation's maritime assets.

First, he issued an appeal for a constructive partnership between the federal government and the maritime industry, formed to fashion a modern maritime policy. This modern policy, he said "must incorporate such things as technological development, regard for competition, and fresh look at the whole spectrum of subsidies. Modern subsidy policy should encourage and reward innovation, productivity gains, and this enlightened society's insistence on protecting the wellbeing of workers and the environment." Second, he called for the next President to appoint a maritime czar, with Cabinet-level rank in the executive branch to lead the development of a modern maritime policy. This official would report directly to the President. Mr. Farrell cautioned that such an appointment would only be successful if it were backed by the full commitment and resolve of the President of the United States to preserve the merchant marine.

Third, he called for sweeping reform of the regulatory machinery of the federal government, including the establishment of an appellate body, perhaps in the Office of Management and Budget (OMB), to which industry could turn for review of regulatory agency activity, and for the institution of sunset provisions for outdated regulations. He pointed out a number of "mindless regulations," recently imposed on the industry, that he termed "examples of regulations that should never be issued by a responsible and responsive government." He stated that an appeals group in OMB "would draw to the attention of the appropriate Cabinet Secretary and proposals that they judged egregious.

This approach would at least give foolishness no place to hide," Mr. Farrell said.

Mr. Farrell concluded his address by exhorting industry leaders to make the necessary sacrifices to join together and form an alliance with the federal government, to shape a modern maritime policy, "which will first protect this nation's future, but which will also be an investment in a future which will result in a cornucopia of benefits for all." 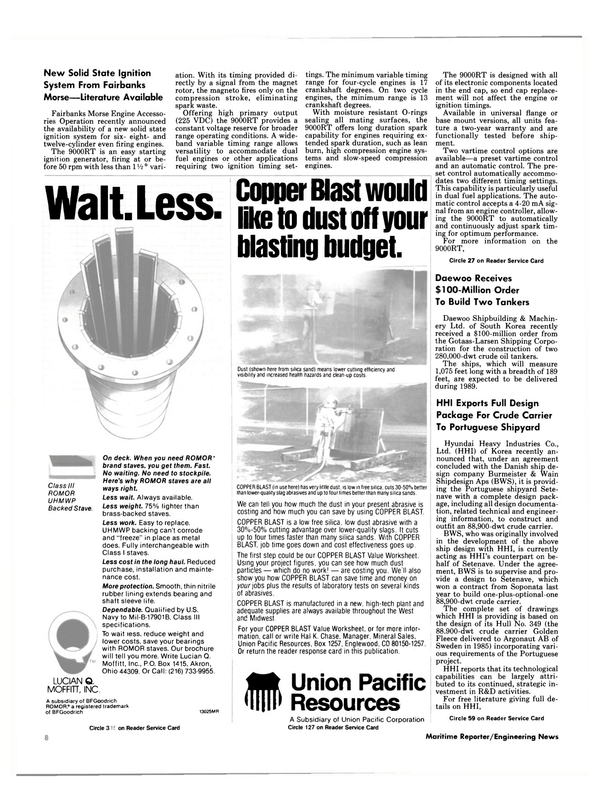