Sheldon L. Morgan of Mobile, Ala., senior vice president of First Alabama Bank, was elected as chairman of the National Waterways Conference's board of directors at the organization's annual meeting this year in Little Rock, Ark.

He succeeds Rodman Kober of Chicago, vice president-transportation of Continental Grain Co., who had held the chairman's post for the last two years. Moving up as vice chairman was Berdon Lawrence of Houston, president of Hollywood Marine, Inc.

Harry N. Cook of Washington, D.C., was reelected as Conference president, a position which he has held since 1978. J. D. Laman of Houston, manager of marine transportation for Dow Chemical USA, was named as first vice president.

Mr. Morgan, the Conference's newly elected chairman, worked for the Alabama State Docks and the Mobile Area Chamber of Commerce before becoming a bank official in 1972. He has been president and is currently chairman of the Warrior- Tombigbee Development Association.

Reelected as vice presidents of the Conference were Vernon E.

Behrhorst of Lafayette, La., secretary of the Louisiana Intracoastal Seaway Association; Wallace A.

Louis, publisher of The Waterways Journal, was named to another term as Conference secretary, and Howard D. Margraff, also of St.

Louis, was reelected as treasurer.

Paul, executive vice president, Upper Mississippi Waterway Association, was elected to the board of directors in the association category, and two others—Morgan D.

In the shipper category, Gale R.

The National Waterways Conference's 1987 annual meeting was held at the Excelsior Hotel in Little Rock. In 1988, the organization will meet on September 21-23 at the Opryland Hotel in Nashville.

The 400-member Conference, founded in 1960, works to promote a better understanding of the public value of the American waterways system. 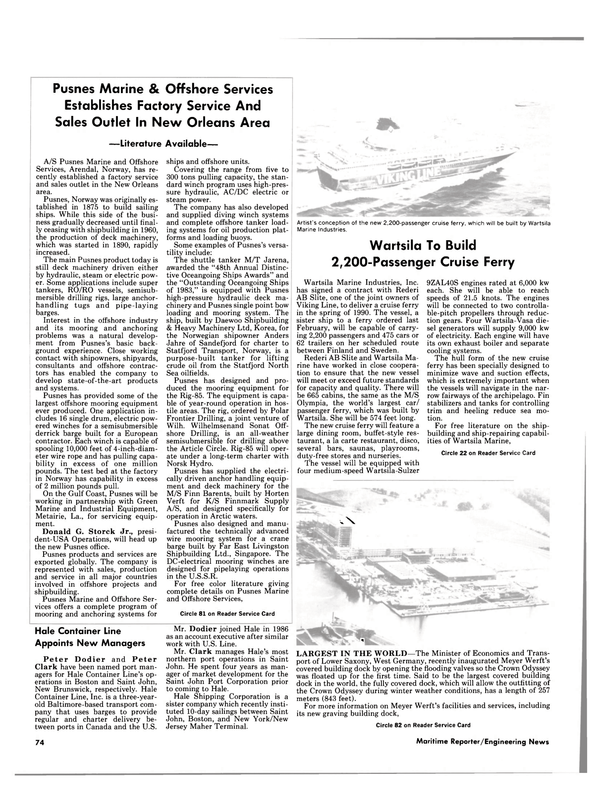