Responding to the need for a presence and to assist in the professionalization of the U.S. marine salvage and firefighting response, nine U.S. salvors have joined together to form the American Salvage Association (ASA). The initial group has participated in a vast amount of all of the significant salvage and wreck removal cases that have occurred over the last 10 years in the U.S. The Association's current membership is comprised of: Bisso Marine; Crowley Marine Services; Donjon Marine Co.; Marine Pollution Control; Resolve Marine Group; Titan Maritime Industries; Weeks Marine; Smit Americas; and T&T Marine Salvage. Membership is currently open to any U.S. salvage contractors who are committed to the present and future state of their industry.

At the Association's premiere meeting, J. Arnold Witte, a former president of the International Salvage Union and CEO of Donjon Marine was elected president for an initial two-year tenure.

The Association's main focus is to professionalize and upgrade the marine casualty response in U.S. coastal and inland waters. "The emphasis in the past has been on oil spill response and clean up. A prompt salvage has always been the best environmental prevention tool in the marine industry's response capability," Witte said.

ASA also plans to ensure open lines of communication and cooperation with regulatory authorities, both state and federal, the environmental community, and with shipowners and underwriters to promise effective operations in the future.

"The unique nature of U.S. operations heavily contributed to our decision to form a U.S.-based salvage association," Richard Fairbanks said. "We are committed to improved salvage and firefighting response in the near term." Other pertinent issues, such as safety, insurance, increased training, adequate salvage assets and responder immunity are also at the top of ASA's list of priorities. 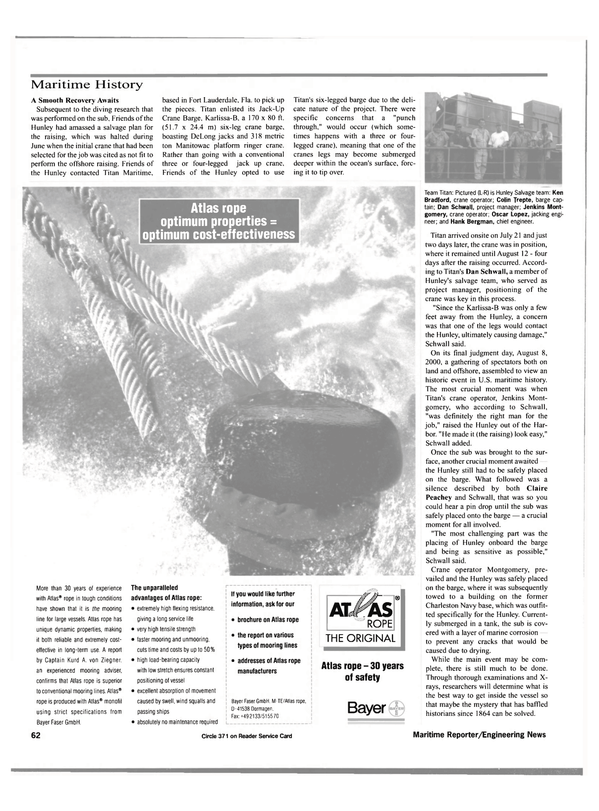