More than a decade after the U.S. enacted OPA '90, much to the consternation of the vessel design and owning community, the International Maritime Organization (IMO) has taken the first formal step towards a global phase-out of single hull tankers.

The similarities between the action taken by the U.S. — action that was roundly panned outside of the States due to the fact that it was not undertaken under the auspices of the international community — and the recent action at IMO are uncannily familiar; both actions coming in the wake of a high-profile oil spill disaster. The action at IMO was pushed forward vigilantly by the European Union in a determined effort to ensure that accidents such as the Erika, which broke in two and sullied the south of France last December, is unlikely to happen again.

While market factors such as increased ship sales is obviously not the primary concern in matters of protecting the environment, ships and crews, it is impossible to escape the fact that a phase out of single hull tankers, combined with the current overall poor sentiment towards fixing older tankers, will have a tremendous effect on the demand for vessels employed to move oil products. A recent Japan Ministry of Transport report showed that the current proposals for phasing out single hull tankers may induce additional tanker newbuilding demand of 30 milliondwt in 2003, and 80 million-dwt in 2008 (or 2010) for replacements of phased out tankers.

In the interim, there would be a tightened shipping market and resultant higher freight rates.

The I M O Rules The formal approval of the first phase of a single hull tanker phase out came with the approval by the 45th session of its Marine Environment Protection Committee (MEPC 45) of a working group report on proposed amendments to MARPOL 73/78. The approval thus paves the way for the adoption of a revised regulation 13G of MARPOL at MEPC 46, the timing of which has already been brought forward to April 2001 to expedite the process. For purposes of classification, single hull tankers are separated into three categories: Category 1 Oil Tanker Oil tankers of 20.000-dwt and above carrying crude oil, fuel oil, heavy diesel oil or lubricating oil as cargo, and of 30,000- dwt and above carrying other oils, which do not comply with the requirements for protectively located segregated ballast tanks.

Category 3 Oil Tanker Oil tankers of 5,000-dwt and above but less than the tonnage specified for Category 1 and 2 tankers.

Hence, a good deal of these category tankers will be scrapped under current requirements, without the acceleration scheme. However, the age limit of 23 years old to Category 1 tankers by the acceleration scheme will cause, according to the report, an impact to demand and supply of the tankers when it takes effect on January 1, 2003.

In addition, the working group concluded that Category 2 ships could be operated after 2010 only if they are high quality units, which have been subjected to a Condition Assessment Scheme (CAS), encompassing elements categorized in three sections: physical checks; documentation recording; and possible improvements in survey and inspection practice.

It was stressed that CAS should not undermine the Enhanced Survey Program (ESP), and it was decided - following some delegations serious concerns about implementing such a scheme — that the matter needed to be settled before MEPC 46, and it was agreed to set up an Intersessional Working Group in late January 2001.

According to the Japanese report, the biggest impact will be felt in the Category 2 tanker class, as by the year 2010 the majority of this class will become only 17 to 18 years old. The youngest one will only become 14 to 15 years old at this time, furthermore, VLCCs are sharing a large portion of the younger generation. 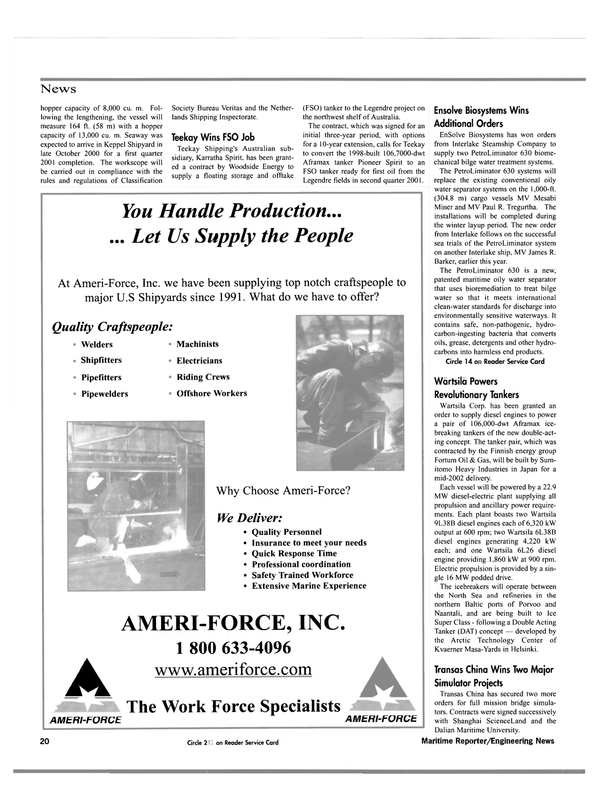