Seeking to vastly expand its propulsion range and the types of vessels, which it serves, MTU has introduced a new group of engines dubbed the 8000 series.

Presented in Hamburg in conjunction with SMM 2000, the new engine is considered an essential part of a product offensive, which was launched in 1996 with the introduction of the Series 2000 and 4000 engines.

Initially, the engines are being touted as appropriate for high-speed ferries, yachts and naval vessels, all current strongholds for the current MTU stable.

However, the 8000 concept goes far beyond a 20 cylinder version of these applications. Accordingly, MTU is planning to make available to the market 16V and 12V versions and, due to the flexible engine concept of the 8000 series, in-line engines and heavy-fuel engines, allowing the company the capability to provide a range of products for the large segment of commercial ships.

The 8000 features common-rail injection, a technology that was originally deployed in the MTU 4000 series and allows the independent determination of all injection parameters, resulting in reduced fuel consumption and emissions.

Another characteristic of the 8000 series is the sequential turbo charging, which is an optional feature. The technology is designed to considerably help supercharged engines to achieve a wide performance map, thus good acceleration while keeping fuel consumption and smoke levels low. With sequential turbo charging, individual exhaust turbochargers can be switched on and off during operation, depending on the engine's power demand.

All engines of the Series 8000 are controlled and monitored by the electronic engine management system MDEC.

The system is designed to optimize all engine functions, and the engine can be included in an overall controlling and monitoring concept of the entire propulsion system and other areas of the ship.

The reported drive in developing the 8000 was an overall reduction of life cycle costs through the reduction of fuel consumption and maintenance costs. For example, when deployed in a fast com- mercial ship application, the fuel consumed by the 20V 8000 lies, over a wide operating range, below 195 g/kWh. At its best performance, it remains below 190 g/kWh, while always keeping within IMO limits for NOx.

On the maintenance side, intervals between the engine main overhauls are set at 24,000 hours for fast commercial vessels. When maintenance is needed, time spent working on the powerplant is minimized by the fact that all components subject to maintenance routines have been placed into a so-called service block at the free end of the engine. 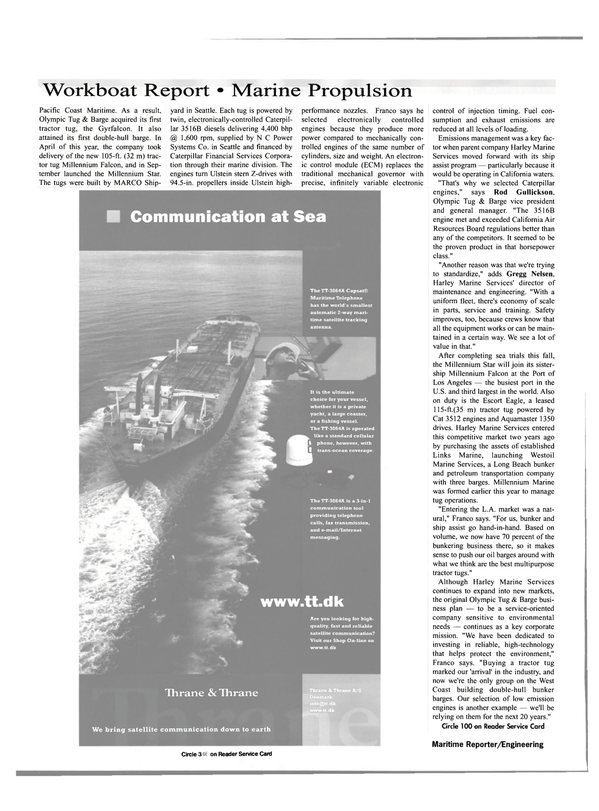