For an independent tanker owner to undertake a newbuild fleet development program amounting to 3-million tons of crude oil carrier capacity in itself demonstrates a high degree of business verve. But to emphatically put one's own stamp on the design, construction and equipping of such tonnage is an added expression of will, given the productiondriven tendency in the industry towards shipyard-orientated and class-minimum specifications.

Piraeus-based Hellespont Shipping Corp.'s commitment to a new generation of ultra large crude carriers (ULCCs) is exceptional on its own account, given the paucity of new investment in the category over the past quarter-century. The company is already an active exponent of oil transportation on the ULCC scale, controlling six tankers in the 315,000- 421,000-dwt range. The technical challenge presented by a return to new construction in the ULCC segment is all the greater for the added structural complexity imposed by mandatory double hulling.

In addition to four 302,700-dwt VLCCs booked with Samsung Heavy Industries, Hellespont has three 442,470-dwt newbuilds contracted at Koje Island's other major shipbuilder, Daewoo Heavy Industries. Confirmation of a fourth ULCC from the Okpo yard is on the cards. It claims that both classes of vessel, due to be commissioned between September next year and December 2002, will set a new standard for large tankers.

Counter to the trend in the industry, where owners' actual preferences are often subjugated to shipyard production considerations, Hellespont's nascent VLCCs and ULCCs reflect a very high degree of tailoring to the contractual party's requirements founded on expectations of long life and dependable, safe — as well as efficient — service.

The additional features and construction criteria stipulated by the shipowning group are understood to have carried a premium in excess of $10 million relative to the going market rate for such tonnage. Judicious timing of the order, including the program's array of options, now largely exercised, presumably made the additional expenditure more palatable to the company, which is 51 percent owned by Basil Papachristidis' Hellespont Group and 49 percent by Loews Corp.

The extra capital outlay is indeed a measure of a long-term trading perspective, and will create a more effective platform for the sound operating and maintenance practices, which are also elemental to the Hellespont philosophy.

The shipowning group is unequivocal in its belief in the inter-relationship between investment in a higher standard of design, construction and equipment in factors of efficiency, market competitiveness, safety and environmental protection.

Moreover, the improved ship productivity arising from the adoption of a higher power concentration for a faster speed, coupled with the extra shipment capacity vested in the ULCCs, should place the company in a particularly advantageous earnings position at times of exceptional rates. All longstanding shipowners know from experience that even short-lived peaks can generate enormous revenue gains that more than offset long periods of trading at lackluster rates.

Introducing a higher standard from the outset, and being equally diligent in ensuring the requisite upkeep, also has a signal bearing on asset values in a no less fickle sale and purchase market.

Main tenets of the design philosophy have been to build ships which reflect the construction standards applied by Japanese yards in the mid 1970s, manifested in a robust generation of vessels still trading with many owners, and which should be able to last 40 years or longer without steel replacement or costly repairs. Hellespont's up-to-the minute experience with ULCCs has provided a solid basis for the design and equipment input to the new breed, while the Bureau Green Award Certificates conferred in recent years on its existing, 1970s-built vessels is an endorsement of the operating practices which it espouses.

As a prime example of its circumspect approach to the build program on the Korean peninsula, each of the VLCCs will have a substantially greater steel content than the norm, for a projected lightship weight of 48,150-tons.

This may be compared with a yard minimum of some 40,000-tons, and up to JEAMAR REGISTERED!

In addition, the VLCCs will offer a remarkably fast, laden service speed of 17.1 knots, by virtue of the adoption of far more powerful propulsive power installations than is the norm for such vessels. While current newbuilding VLCCs generally have power concentrations of no more than 35,000-bhp, the new breed from Samsung will be fitted with a 44,640-bhp two-stroke plant. The ton-mile capacity of the newbuilds is accordingly around 10-percent greater than that of similar-size tankers.

The selected design, the Sulzer RTA84T-D, was favored in its eightcylinder configuration not only to achieve the power rating and margin sought, but also because the cylinder number was considered to offer a better shipboard environment relative to seven-cylinder plant typically used for VLCC propulsion. For the ULCCs, a step-up in power to 50,220-bhp has been achieved through the selection of the same class of engine from the Wartsila stable, but in nine-cylinder format. Each colossus, with main dimensions of 1,246 ft. (380 m) length overall and a 223 ft. (68-m) beam, is accordingly expected to be able to reach 16.5 knots with a full load.

Hellespont's selection of Sulzer RTA84T-D machinery comes amid widely-publicized problems experienced by other VLCC owners with a number of RTA84T and RTA84T-B engines, which sustained bearing girder cracks. The company is confident of avoiding any shortcomings by insisting on having the improved design of bearing girders cast in Japan for delivery to the licensee engine manufacturer in South Korea. Moreover, the machinery will be fitted with the original, more robust girder form employed for the wide-bore engine class.

Considerable attention has also been paid to ballast tank protection, given the complexity of such huge double-shell structures and the implications for maintenance, safety and long-term integrity.

All ballast spaces bar the aft peak will be inerted with double-scrubbed gas, adopting a system developed and tested on existing ULCCs over the past six years and shown to be highly effective in enhancing safety and corrosion control.

The inerting medium is reportedly so 'clean' that it has 25 times less sulfur than normal. As a key element in its tank purging and inerting initiative, Hellespont has developed the Vent 2D system to model air/gas flows in the double-hull spaces. It is now making the computer program freely available to the industry on request. 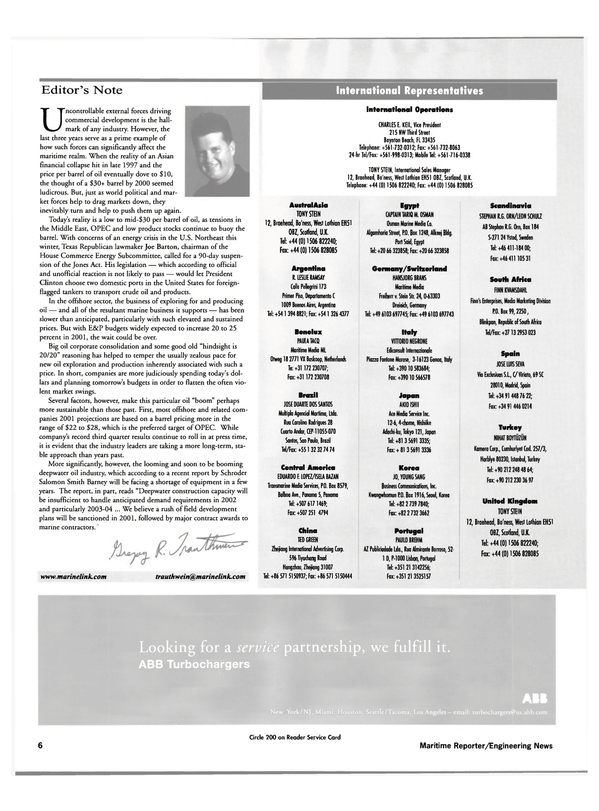