What Happened to the Hunley: ?

Since its sinking on February 17, 1864, researchers and historians have pondered the above question for more than a century. What we do know, however is that a piece of Civil War history had been lying on the floor of Charleston Harbor off the coast of South Carolina. For all this time, no one, except showman P. T. Barn um (he once offered a $100,000 for the Hunley's recover during the 19th Century) had attempted to recover the doomed sub.

Things changed however about 20 years ago, when American author, Clive Cussler, decided that he would try to explain the unexplained — he and his crew of divers from the National Underwater and Marine Agency (NUMA) ventured into the Charleston Harbor determined to locate the Confederate sub. In conjunction with the divers, was the South Carolina Institute of Archaeology and Anthropology (SCIA A) who worked with the dives to map out various sites along the coast where the Hunley may have sunk. And on May 13, 1995, after more than 15 years of research and development, Cussler and his team found the piece of iron beneath the sediment.

It would later be determined by both the SCIAA and NUMA as the historical sub — which was the first to ever complete a successful wartime attack.

By Regina P. Ciardiello, associate editor While the search for the Hunley continued throughout those tedious years, the crews ran into quite a few roadblocks during that time. In fact, a 13- year lapse occurred from 1981 until 1994, when the search was abruptly stopped. While others may have been feeling their frustrations mount that the sub would never be found, Cussler did not allow his emotions to get the best of him, he somehow believed that the Hunley was different from any other expedition that he had spearheaded. In fact, according to a passage in his book "The Sea Hunters", he had penned, "Perhaps I'd developed a mental block or just wasn't in the mood. For various reasons some shipwrecks can never be located. I did not believe this to be the case with Hunley." Ironically, Cussler's thoughts proved to be true and after resuming the search in the fall of 1994, underwater archaeologists Ralph Wilbanks and Wes Hall realized that they had found the magnetic anomalies that they had been looking for. The two archaeologists, along with Harry Pecorelli, discovered that the Hunley was covered more than three feet below the surface. Resting on its starboard side at a 45-degree angle, the vessel's finding prompted the commencement of the Hunley Commission and the Naval Historical Center, who formed a partnership to provide funding that would get the ball rolling on the recovery of the sub, which had also been named to the National Register of Historic Places by the National Park Service.

Before any further time could be spent on a recovery plan, it would first have to be determined by both the Park Service and the Naval Historical Center that the buried vessel lying beneath the surface was in fact the Hunley. It was decided in the spring of 1996 that it was not speculation, but pure fact that the vessel was the historical sub. Following this discovery, a decision that involved raising of the sub was recommended.

At this time, an additional organization was formed to assist with the preservation process. Created by the Hunley Commission was a non-profit organization called Friends of the Hunley, whose main mission was to finish off what the vessel could never do, which was to complete its journey home.

With funding in place and the vessel's exact position pinpointed, the next task was assembling a team of divers and a project leader who would spearhead the recovery process. Realizing the project's level of importance, the U.S. Navy tapped its chief underwater archaeologist, Dr. Robert S. Neyland, to serve as project director for the Hunley's raising.

Neyland, who is head of the Underwater Archaeology Branch at the Naval Historical Center in Washington, D.C., hired Claire Peachey, an archeologist/conservator there to work alongside him as project field conservator.

Peachey, who studied underwater archaeology at Texas A&M, has extensive experience in these types of dives, as she has previously worked in the Mediterranean recovering a shipwreck that had occurred during the Bronze Age around 1,300 B.C.

"The biggest question here is why did the Hunley sink," Peachey said.

"Through our research and from the raising, we hope to determine that." Peachey's work on the Hunley began in late 1999, where she and Dr. Neyland and other members of the diving team began fieldwork of collecting data on the sub. Peachey began diving to retrieve and process various artifacts that had been onboard the vessel. Through her dives, Peachey found hollow iron snorkel tubes. She also discovered some other pieces that may have been associated with the sub's hull. According to Peachey, most of the dives were conducted during the summer months so the team wouldn't get caught in the whirlwind hurricane season that customarily pelts the Southern states with heavy wind and rains in the fall.

Diving 30 ft. (9.1 m) beneath the surface, Peachey would use a suction tube to remove some of the sediment that covered the Hunley so that the lifting equipment could be placed there. Sometimes having to work in zero visibility trying to locate a sub that was literally buried in mud, Peachey kept her bearings by just going down beneath the sur- face and doing what she had to do.

"You get used to it (the poor visibility)," Peachey said. "At first I was a little disoriented, but I knew that I had to just concentrate on the task at hand." Sometimes performing dives that lasted three hours at 35 ft. (10.6 m) below, Peachey was able to talk with Neyland and the rest of the crew via a helmet that provided full time communication services.

She mentioned that this was especially helpful when she would locate artifacts or pieces of the vessel and could then describe to her team above exactly what she was viewing.

On A Dark Winter's Night What historians know about the Hunley is that it set out on that February evening in 1864 from its mooring on Sullivan's Island, South Carolina, setting the stage to meet up with the USS Housatonic, which was anchored approximately three miles outside of Charleston Harbor. Supervising the 40 ft. (12.1 m) Hunley, was a young army lieutenant, Geroge E. Dixon, who apparently took over the helm subsequent to the drowning of two previous crews on the vessel.

Coming up to the surface of the Harbor, Hunley sidled itself nearby Housatonic's hull, where it was discovered by a union sailor, who had been on watch that night. Feeling threatened by the Hunley's presence, and thinking that it was lining up to detonate its torpedoes, Housatonic let its guard down, and what followed were mass explosions, which alerted Dixon and his crew that trouble was imminent. Attaching its 135-lb. torpedo beneath Housatonic's water line, this allowed Hunley to counterattack with an explosion that would plummet Housatonic beneath the surface.

According to reports that were filed at Confederate military headquarters following the explosion, Hunley had received a signal from a beacon that would guide the sub back to shore.

Despite this assurance, the vessel never returned to its homeport — and was never to be seen again until its raising this past summer.

The vessel, which will forever be known as the first submarine to sink an enemy warship in combat, was constructed in July 1863, by James McClintock, Baxter Wilson and its namesake — Horace Hunley.

The sub was shuttled to South Carolina one month later, where it was eventually taken over by Lieutenant Dixon.

A Smooth Recovery Awaits Subsequent to the diving research that was performed on the sub, Friends of the Hunley had amassed a salvage plan for the raising, which was halted during June when the initial crane that had been selected for the j ob was cited as not fit to perform the offshore raising. Friends of the Hunley contacted Titan Maritime, based in Fort Lauderdale, Fla. to pick up the pieces. Titan enlisted its Jack-Up Crane Barge, Karlissa-B, a 170 x 80 ft.

Rather than going with a conventional three or four-legged jack up crane, Friends of the Hunley opted to use Titan's six-legged barge due to the delicate nature of the project. There were specific concerns that a "punch through," would occur (which sometimes happens with a three or fourlegged crane), meaning that one of the cranes legs may become submerged deeper within the ocean's surface, forcing it to tip over.

Titan arrived onsite on July 21 and just two days later, the crane was in position, where it remained until August 12 - four days after the raising occurred. According to Titan's Dan Schwall, a member of Hunley's salvage team, who served as project manager, positioning of the crane was key in this process.

"Since the Karlissa-B was only a few feet away from the Hunley, a concern was that one of the legs would contact the Hunley, ultimately causing damage," Schwall said.

On its final judgment day, August 8, 2000, a gathering of spectators both on land and offshore, assembled to view an historic event in U.S. maritime history.

The most crucial moment was when Titan's crane operator, Jenkins Montgomery, who according to Schwall, "was definitely the right man for the job," raised the Hunley out of the Harbor.

"He made it (the raising) look easy," Schwall added.

"The most challenging part was the placing of Hunley onboard the barge and being as sensitive as possible," Schwall said.

Crane operator Montgomery, prevailed and the Hunley was safely placed on the barge, where it was subsequently towed to a building on the former Charleston Navy base, which was outfitted specifically for the Hunley. Currently submerged in a tank, the sub is covered with a layer of marine corrosion to prevent any cracks that would be caused due to drying.

While the main event may be complete, there is still much to be done.

Through thorough examinations and Xrays, researchers will determine what is the best way to get inside the vessel so that maybe the mystery that has baffled historians since 1864 can be solved. 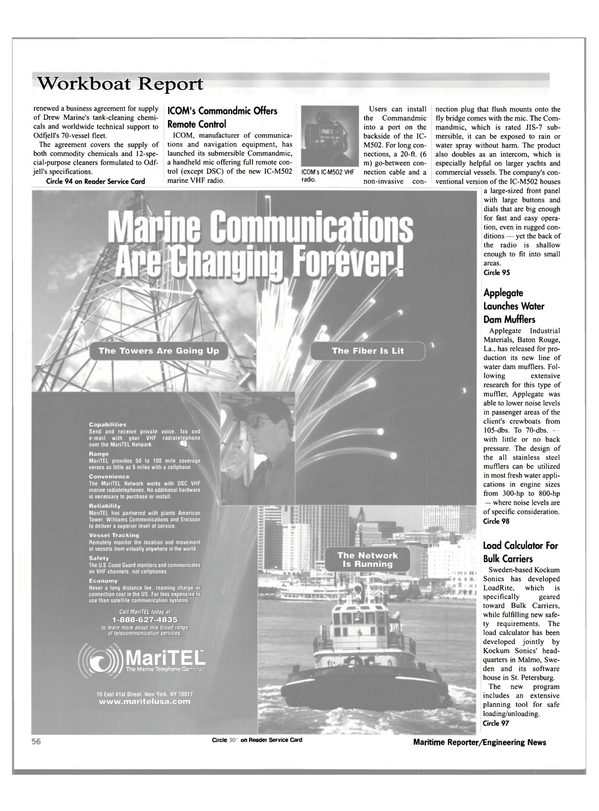 Read What Happened to the Hunley: ? in Pdf, Flash or Html5 edition of November 2000 Maritime Reporter