Barge operators are often accused of giving the marine fuels industry a bad name. While it is true that there are barging companies with a debatable approach to the business, they are very much in the minority. Worldwide, barge operators are working hard to improve their services and operations. In many respects, they are leading not only the bunker industry — but shipping as a whole. Nowhere is this demonstrated clearer than during barge-to-ship transfers of oil; nowhere is this expertise better demonstrated that in the U.S.

Operating bunker barges in the U.S. is a fraught business. To say the very least, U.S. authorities do not like oil in their harbors, and culprits can find themselves on the sharp end of some harsh penalties if negligence is proved.

In addition to the penalties, the bureaucratic paperweight that descends on bunkerers subsequent to a spill is hefty indeed. According to one U.S. bunkerman, no fewer than 17 officials turned up when a couple of gallons of oil were spilled by his company during a delivery.

There is, then, plenty of incentive for U.S. bunker barge operators to get things right. And. it has to be said, the U.S. has some of the world's best barging companies plying its harbor waters. IBIA recently looked at the issue of quality barging in its quarterly journal World Bunkering.

One of the respondents to a questionnaire sent to a quartet of quality barging firms around the world was a Houston-based firm. The questionnaire was designed to find out how companies are tackling the issue of spill prevention in the face of ever increasing regulatory pressure.

Its findings show that bunker barge operators are taking spill prevention seriously and that measures that have been introduced over the last decade have had a dramatic impact.

Analysis of spills shows that human error plays a large role, often fueled by a lack of communication between barge crew and the personnel on board the receiving vessel. To eliminate, as far as possible, accidents from occurring due to miscommunication, the Houston respondent to IBIA's questionnaire has drawn up a bunker transfer procedure form. This outlines which grades of fuel the receiving ship would like, in which order and at which pumping rates. The form also has spaces for tanker measurement prior and subsequent to the oil transfer. The form is completed by the chief engineer and signed. It provides a blueprint for the bunker transfer and fixes everyone's minds on what must happen.

Having procedures in place only works properly if personnel are made aware of the importance of following them and proper training programs are implemented. IBIA has education as its cornerstone and has produced courses and publications to help those in the industry understand their chosen profession better. The message is getting through and many companies in the bunker business, including barge operators, have drawn up training programs for their staff.

Procedures and training are only two parts of the equation, though. Improved hardware too has helped reduce spills, or mitigate their consequences should one occur. Most obvious is the introduction of double-hulled barges in U.S.

ports, in line with OPA 90 legislation.

As older barges are phased out, the world's barging fleet will increasingly become double-hulled. Improved designs will also mean that they become more robust. While there are few global limits on the age up to which bunker barges can be kept in service, current pressures in the sea-going tanker industry will likely trickle down into other industries too. The days of the 30 or 40- year-old bunker barge are numbered.

In addition to youth and more robust hulls, small alterations to deck configurations also help reduce the chances of a spill. Higher deck coamings and spill rails have had a significant impact. One U.S. barge operator has gone on record as crediting the introduction of higher spill rails with the prevention of at least three spill incidents in recent years.

Where the oil would previously have flowed into the port waters, it was contained on deck and cleared.

Nothing is perfect, of course. It is no surprise that given the vast number of bunker operations worldwide annually, spills still happen, albeit only very occasionally.

When they do occur, the introduction of new equipment has helped contain spills and limit their consequences.

Spill booms that can be deployed in a matter of minutes are in operation in the U.S., for instance, preventing oil spills from getting out of hand. Some shipping companies, wary of the penalties of even the most innocuous spill, have started to request that bunker barge operators deploy the spill booms prior to pumping on any delivery.

It is more work, with associated costs, but ship operators are willing to pay the extra and they are finding a larger number of barge operators able to provide them with this added assurance.

Lest anyone be in any doubt about the financial consequences of a spill, a quick look at the insurance cover barge operators carry should dispel any corn- placency.

In Europe, one Rotterdam-based operator has admitted to being covered up to $500 million. In the U.S., cover typically tops $300 million. These figures reflect the severity of the consequences of spills.

Planning, training, equipment, and above all communication are the factors that contribute to incident-free oil transfers.

Barging companies know this and the leaders in the field, including quality outfits in the U.S., have implemented managerial and operational procedures to keep bunker oil separate from harbor waters. Barge companies may once have been the whipping boys of the industry, now they are playing an important role in whipping it into shape. 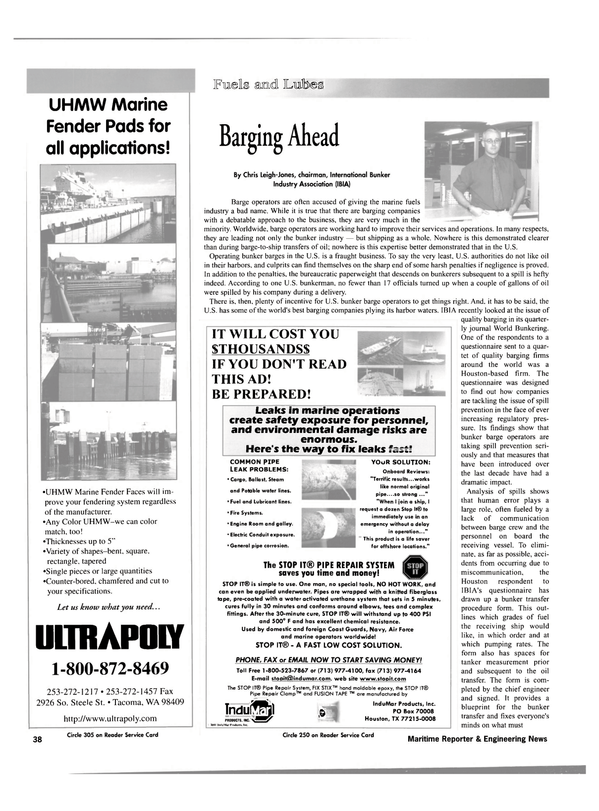 Read Barging Ahead in Pdf, Flash or Html5 edition of May 2001 Maritime Reporter