Few marine incidents have vexed the collective international marine community as much as the recent situation with the damaged product tanker Castor, a ship, which experienced a near fatal deckplate crack in mid-voyage and then was denied safe harbor for fear of the ship splitting open and spewing its gasoline cargo. Though the ship was eventually docked safely without environmental incident, the name Castor will serve as a lightning^ rod in the IMO to more firmly establish rules and procedures for ships in distress at sea.

As the political wrangling and finger pointing start to subside, attention is now turned on the ship itself, and more accurately finding out the reason that an assumed healthy ship developed a near fatal deckplate crack. Following an e x h a u s t i v e inspection and analysis of the damaged product tanker Castor, the Cyprus Department of Merchant Shipping and ABS have jointly announced preliminary findings that point to hyper-accelerated corrosion as the probable principal cause behind the structural failure.

"The Castor has become a floating laboratory, which is providing us with some surprising findings," said ABS chairman and CEO Frank J. larossi. "If these initial conclusions hold up, there will be significant implications for class and possibly wider implications for the manner in which the new generation of double hulled tankers should be constructed and maintained." A formal report into the casualty will not be issued by the Cypriot authorities and by ABS until the conclusion of detailed laboratory testing of steel samples cut from the damaged section of the tanker. "It will take some time to scientifically verify that our interpretation of events is correct," said larossi.

"The Castor represents an unprecedented level of cooperation between the class society and the Flag State involved in a casualty," said Captain Andreas Constantinou, senior marine surveyor for the Cyprus Department of Merchant Shipping.

The 600 tons of steel, primarily in the deck plating and underdeck longitudinals, that was renewed on the Castor at Special Survey in late 1997 has provided the key to understanding what tran- spired in the interim. "Our gaugings indicate that sections of this steel have already wasted by as much as 30 percent," said larossi. "This indicates an annual corrosion rate of as much as 1.5 mm compared to normal rates of about 0.1 mm or less." The critical element, according to the preliminary findings, is the presence, and absence of coatings.

"The original steel had been coated," explained ABS chief surveyor Gus Bourneuf. "This coating had begun to break down with age. At the fourth special survey, the new steel was not coated.

There were no sacrificial anodes in the tanks so the uncoated steel in the underdeck area acted as the anode with the partially corroded, original steel providing the principal point of attack." According to an independent corrosion expert brought in by ABS to analyze the condition of the ship, three other elements are considered likely to have contributed to the rapid deterioration.

The vessel had been engaged in the gasoline trades, the most corrosive of all oil products. The critical no. 4 tanks were used for ballast purposes, introducing salt water into the chemical equation.

And the vessel had been trading into hot areas, such as West Africa, greatly raising the ambient temperatures in the ullage spaces and creating a fertile environment for the corrosive action.

"Given the scantlings applicable to this size of ship, the loss of nearly 5 mm of the new steel in just over three years of trading represents a very high percentage loss of section," said Bourneuf.

"The loss of section of the uncoated steel that was not replaced was clearly greater. It is reasonable to conclude that this loss of strength in this critical area of the vessel may have contributed to the buckling, and subsequent cracking of the deck plating in the severe weather conditions encountered on passage." larossi stressed that the focus of the ongoing investigation will be on necessary remedial steps that need to be taken by ABS, recommended to IACS and, if necessary, proposed at IMO. "Once we have definitive conclusions to the investigations, Cyprus will raise the need for any changes in IMO requirements at the governmental level," Constantinou confirmed.

"It must be remembered that the Castor had met all class requirements when the major steel replacement was completed, and had remained in class with no outstandings" said larossi. "We have always felt that the Rules are sufficiently conservative for any operational environment.

Although it must be emphasized that the Castor was structurally sound, it did not sink, it did not lose any cargo or cause any pollution, and no one was injured or lost their life, if there are shortcomings in the requirements we need to rectify that, and do so quickly." Castor is a steel single hull product carrier vessel with a gross tonnage of 18,565 and a deadweight of 31,068 metric tons, built at the Busan shipyard of the Korea Shipbuilding & Engineering Corporation. The ship suffered heavy weather damage while on passage from Romania to Nigeria on December 30, 2000. It was denied a sheltered area to tranship the cargo of 29,500 tons of unleaded gasoline by seven coastal states in the Mediterranean area. The vessel is currently undergoing inspection and repair in Piraeus. 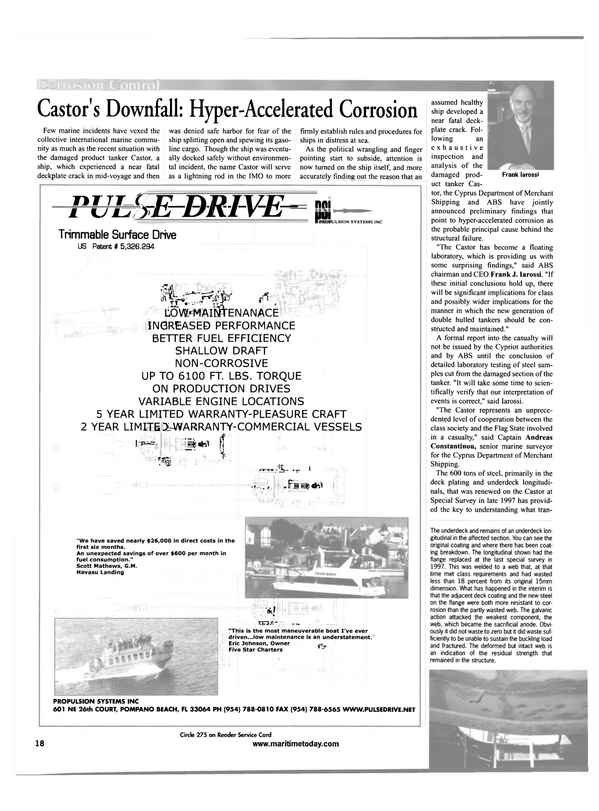