Meet Me In Oslo

Without a doubt, Oslo, Norway is one of the finest places a person would want to be during early June of any year. The nearly endless days, with light never quite conceding the sky to night, the vibrant social activities enjoyed equally by visitors and locals, and breathtaking scenery second to none. Oh, and Oslo also host arguably the world's finest maritime exhibition here every other year, too.

Aptly dubbed "the shipping week you can't miss," Nor-Shipping 2001 is scheduled to takeover Oslo once again from May 29 to June 1,2001.

The exhibition, which was at one time long ago thought (erroneously or not) to be an almost exclusive Scandinavian event, has emerged as one of the top two maritime exhibitions in the world, rivaled only by Hamburg, Germany's SMM show. Oslo attracts a truly diverse and international audience of ship owners; shipbuilders; and ship equipment and system suppliers.

Twenty national pavilions are being organized by such countries as Singapore, China, France, Russia, the U.S.

and the U.K., and the approximately 650 main exhibitors hail from some 51 countries.

The show has grown so much that 2001 is the last at its current home, the Sjelyst Exhibition Center. Busting at the seams for years, the show has finally outgrown its current environ, and in 2003 it will move to a modern new exhibition and conference center at Lillestram - midway between Oslo and its airport.

For those who fear that the move will detract from one of the exhibition's main attractions - Oslo itself - fear not, as the intent is to hold the exhibition portion in a traditional exhibition facility, while maintaining the full roster of social events in and around Oslo. And in the true Nor-Shipping tradition, it is a good bet that just as much business is conducted outside the exhibition hall as in, if not more. Whether on a golf course, out and about at the Aker Brygge, on a fjord cruise or at the famous DNV Barbecue for 2,000 close friends, business ties are formed and strengthened throughout the entire week.

In 1999, Nor-Shipping broke all previous attendance records, as approximately 14,500 industry professionals from over 70 countries attended. They were able to view and make contact with over 1,300 companies from some 50 nations, spread over 650 individual stands. 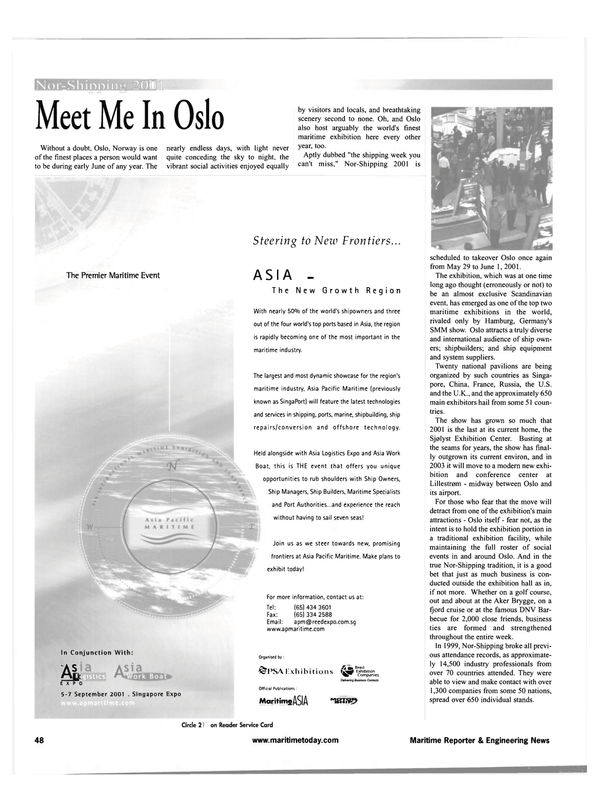 Read Meet Me In Oslo in Pdf, Flash or Html5 edition of May 2001 Maritime Reporter