EU Subsidy Program To Be Considered

The long-running feud regarding shipbuilding subsidies is far from complete, and word is that the EU is proposing to subsidize its embattled shipyards in a long-standing dispute over what it views as unfair competition from South Korea.

The EU will reportedly make the proposal to an EU industrial council meeting in Sweden on May 15. The EU, which has been holding talks with South Korea about the issue for the past two years, could take the case to the World Trade Organization (WTO), but that could take many years, thus the move for a subsidy program of its own. Accusations have arisen that the South Korean government was supporting the Korean shipbuilding industry through debt forgiveness programs by state-controlled banks, in essence allowing Korean shipbuilders to build ships at up to 40 percent below costs. The Korean Shipbuilders' Association maintains that the country's shipbuilders have won market share through increased cost efficiency and quality following substantial investments.

Last year, Korean shipyards received nearly 38.7 percent of global orders, compared to 25 percent for Japan and 16 percent for the EU. 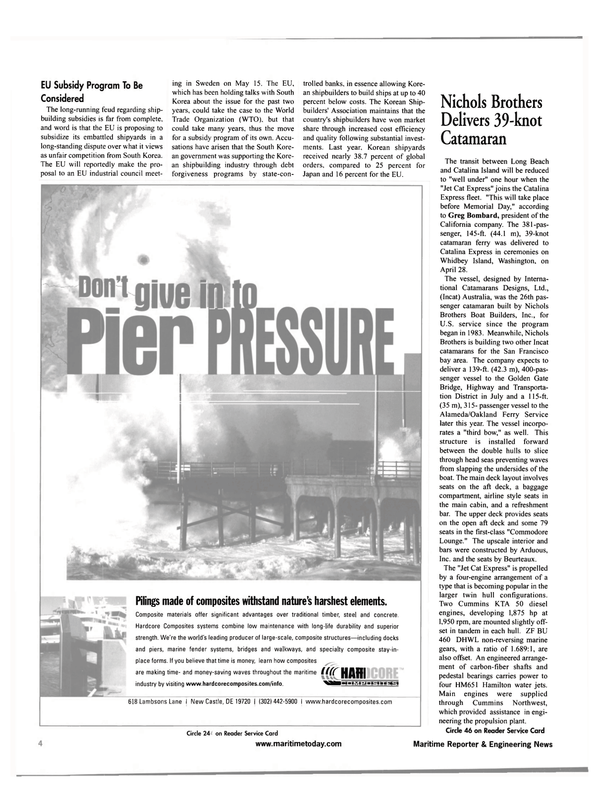 Read EU Subsidy Program To Be Considered in Pdf, Flash or Html5 edition of May 2001 Maritime Reporter