Unauthorized welding on laundry room equipment triggered a fire aboard the cruise ship Ecstasy off Miami in 1998, injuring 22 people and causing more than $17 million in damages, U.S.

The National Transportation Safety Board (NTSB) said that sparks from the welding equipment caused a fire that quickly spread and ignited a large accumulation of lint in the laundry room ventilation ducts. The fire migrated through that system to the aft mooring deck where it fed on dock lines, generating such intense heat that it knocked out an electrical system that helped power the ship's engines.

Ecstasy, with 2,565 passengers and 916 crew, was left adrift several miles east of Miami before rescue crews put out the fire and towed the ship back to port. Sprinkler systems activated by heat and smoke prevented the fire from spreading to upper decks and other areas of the ship, the safety board found.

However, the board concluded that the lack of a fire suppression system on the mooring deck enabled the fire to rage.

Investigators largely praised the crew for its handling of the emergency, but noted shortfalls in procedures for distributing life jackets and accounting for passengers during an emergency.

In its recommendations, the board said Carnival should change its procedures to prevent any unauthorized welding or work that could cause a fire and revise information on safety procedures during emergencies. Crews working on the laundry equipment aboard the Ecstasy failed to obtain the necessary permit to do the work, investigators found.

The board also recommended that the company inspect, and, if necessary, modify electrical circuits to ensure that a single failure could not disable a ship's propulsion system. They also recommended that the cruise ship industry should ensure that fire suppression systems were placed on the mooring decks if they carried equipment in that area of the ship that could burn, and suggested the ships should have emergency call systems in staterooms and crew cabins so people trapped during a fire could at least signal their location. 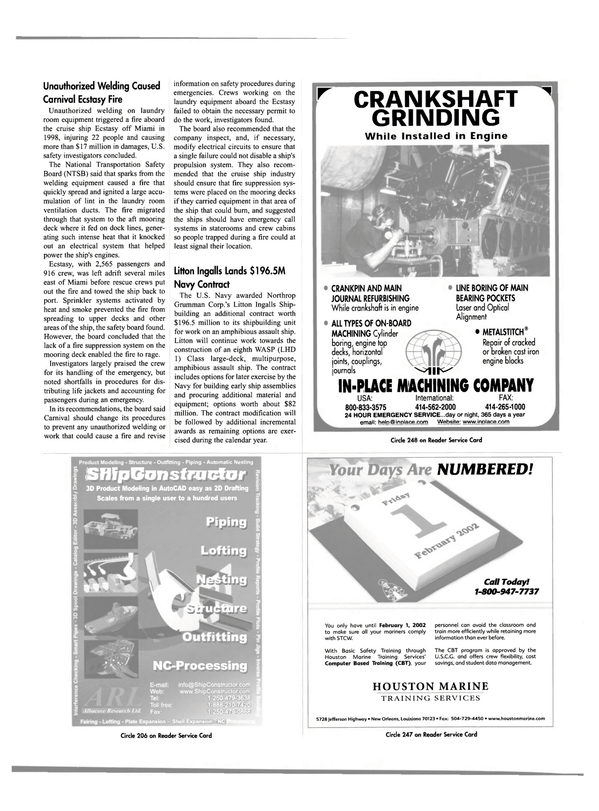