IZAR, the new Spanish shipbuilding consortium formed with the combination of the former Astilleros Espanoles and Bazan, has delivered to Stena Line its brand new ferry Stena Hollandica, which entered service in the Hook of Holland-Harwich route. In October 2000 Stena Line had already introduced its sister ship Stena Britannica.

Stena Hollandica was built at the IZAR Puerto Real yard, as well as the Stena Britannica and the first and second in series, Finneagle and Finnclipper, operated by the Finnish owner Finnlines. IZAR Puerto Real yard has became a world leader in the construction of RoRo and passenger ferries, as in the last three years it has delivered seven totaling an output over 225,000 gt. To solidify its position further in this highvalue vessel niche, IZAR Puerto Real will cooperate with Stena Line in developing RoPax and train ferry projects.

Stena Hollandica, Stena Britannica, Finneagle and Finnclipper are sister vessels based on the Seapacer design developed by Stena. According to Pim de Lange, Stena route director for the Hook of Holland-Harwich service, the two new ships are offering improved frequency and reliability. With a 22-knot cruising speed, the ship offers 452-passenger capacity with 192 cabins.

Innovative Cargo Access System The vessels have a substantial cargo access system on the main deck aft, consisting of a stern ramp/door with a 64 ft.

(19.5 m)-wide driveway that is capable of handling two lanes of traffic simultaneously.

(18.5 m) ramp providing a 21 ft. (6.5 m) driveway into the 21 x 17 ft. (6.5 x 5.2m) forward hull opening. When closed, the inner part of the three-section ramp/door forms a watertight door at the collision bulkhead with the outer section folding behind the bow door. A second watertight door is located behind it. A pair of longitudinal bulkheads split the seven-lane main deck into three sections.

Doors close off the two-lane port and starboard sections forward and aft.

The arrangement of the longitudinal bulkheads on the main deck conforms to Solas 90+50 cm sub-division and stability rules. The doors are watertight at the base and sides when closed, and are stowed parallel to the deck in the open position. The ramp at the bow is partially hoistable, that part hinged to the cellar deck being 111 ft. (33.7 m) in length and 10 ft. (3.1m) wide. End-hinged water-tight covers close off both ramp apertures.

In the upper deck access, the series differs from similar designs, having a single hoistable ramp on the port side located just forward of midships. Trucks that traverse the 19 ft. (5.9 m) wide internal ramp have to make two 180 degree turns before leaving the ship via the bow ramp. The internal ramp can be lifted into its stowed position with a 240-ton load. Two 82 ft. (25 m)-diameter turning areas have been laid out fore and aft on the upper deck, sufficient for the longest articulated vehicles. Apart from the supports surrounding the access casing on the portside, the upper deck is entirely free from pillars and obstructions. A separate drivers' restaurant and lounge and a single business lounge are evidence of the anticipated dual use of the vessels. On deck eight, 87 two-berth cabins, 28 four-berth, two cabins for handicapped passengers, and two VIP cabins are provided, with a further 66 two-berth and six four-berth cabins on deck nine. A total of 25 crew cabins are located at the forward end of deck nine.

Big Capacity at High Speeds Reflecting the trend toward higherspeed RoRo vessels, the sister vessels have a service speed of in excess of 20.5 knots and a trial speed of 22 knots at 90 percent MCR. The propulsion machinery is based on four main engines, each with an output of 5,760 kW (7,720 bhp) at 510 rpm. The combination of four main engines and twin CP propellers was selected as the most flexible option.

The engines drive the propellers through twin-input/single-output gearboxes with power take-offs for 1,600 kVA shaft alternators. Three 870 kW gensets, driven by auxiliary engines, provide sufficient electricity for use in port, and when the twin 1,200 kW bowthrusters are in use. Together with the bowthrusters, a pair of flap rudders guarantee excellent maneuverability.

The vessels are equipped with large surface- area fin stabilizers. An active antiheeling system, which has a pump capacity of 3,000 tons/hr., is also installed. 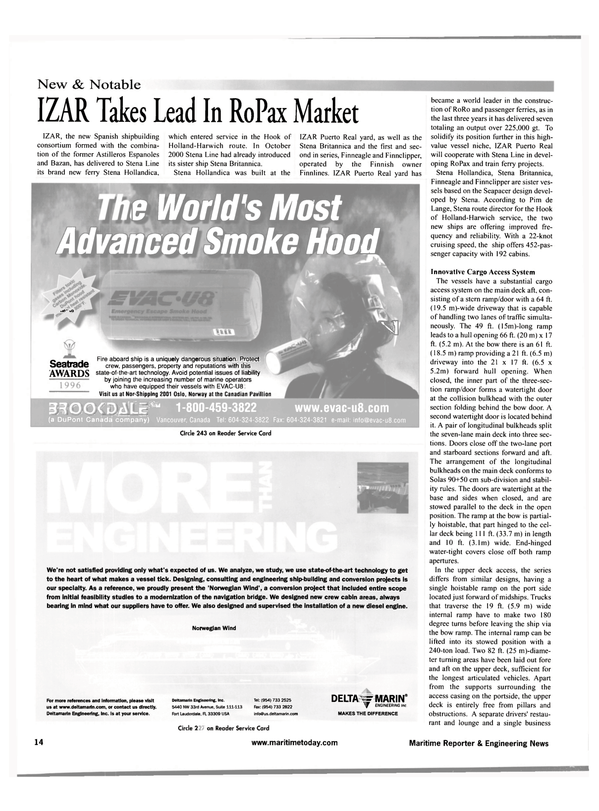