Imagine you're onboard a cruise ship and a fire breaks out and you realize that you are trapped in your stateroom — left to inhale the fatal smoke and gas wafting through the vents. Contrary to popular belief, more than 85 percent of fire related deaths occur, not from burns, but from this type of inhalation. Enlisted to remedy this situation is Caretaker AS, a privately held Norwegian company that manufactures, sells and installs an innovative and patented computerized evacuation and survival system — specifically geared toward the Hospitality and Lodging industry. Already installed in two hotels in Oslo, Norway, Caretaker is striving to find its niche within the cruise industry. In fact, the company displayed its system at this year's SeaTrade Cruise Shipping Convention in Miami, Fla., hoping to attract such interest. The company's appearance at the show fared them well as they are reportedly ready to sign a contract with a major cruise line.

With its development supported by the Norwegian Industrial and Regional Development Fund (SND), Caretaker is comprised of one unit in each cabin connected to a Central control unit via twoway communication through existing cabling. The Central unit can be hooked up to most any type of data systems for retrieval of information — specifically a ship's booking system and fire detection systems.

Quality-certified, Caretaker consists of a system with a central panel on the bridge connected to a small cabinet in each cabin through cabled communication.

This cabinet holds two Brookdale EVAC U-8 smoke hoods, an LCD display for messaging and an alarm. The system can be equipped with a security alarm button enabling passengers to report other emergencies.

The basis of the cabin unit is to pass information to and from the user. When entering the cabin, the user is registered when inserting the key card in a designated cardholder. The holder can be connected in a way that prevents the light in the cabin from being turned on when the card is not in its holder. In emergency situations the user will receive information via the Cabin unit, which is achieved by a loud alarm signal followed by the LCD screen giving instructions as "Go to lifeboat station" or other important information in the passenger's own language. Personal equipment featured within the Cabin unit includes approved EVAC-U8 smoke hoods, which protect against carbon monoxide and other poisonous gases; emergency lights for illumination of the cabin; and batteries for emergency power. When activated, the emergency button, which is placed by the bed and in the bathroom of each cabin, is linked to the central unit that is present on the bridge and in the medical ward.

The crew will use this button in their cabins to confirm that vital information has been received. Subsequent to this, the fire alarm is activated, thus alerting the Caretaker system. At this time, status in each cabin will be presented graphically and in print via the screen and the printer of the central unit.

In a sense, Caretaker gives passengers the possibility to help themselves, and even though this type of situation may be cause for alarm — the risk of panic is reduced considerably. 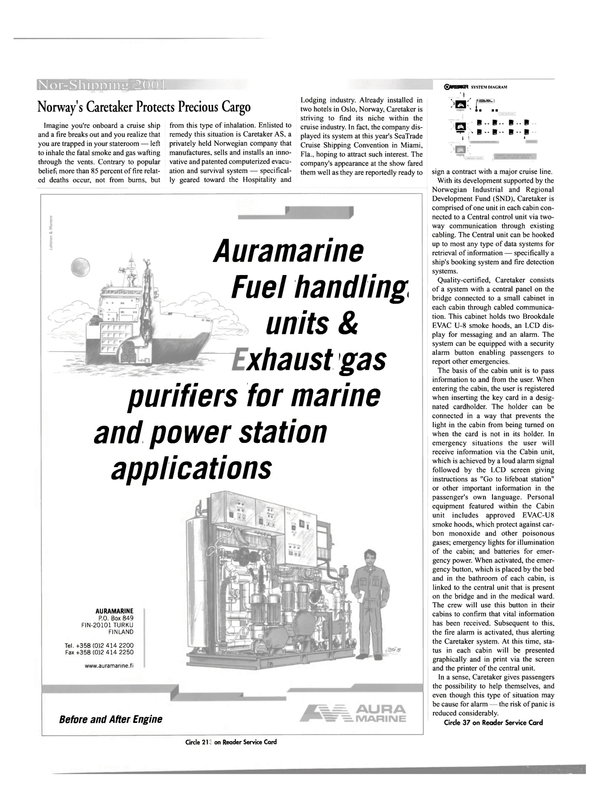