During 2000, member salvors of the International Salvage Union (ISU) responded to more than 300 marine casualties where there was a possibility of a pollution event arising. The Union reported that there was a significant increase in both the number of services provided and the total volume of potential pollutants recovered.

ISU salvors responded to 310 casualties with a potential for causing the environmental damage, as against 232 in 1999 (an increase of one-third). The figure of cargoes and bunkers that had been salved rose to a little more than 36 percent, from 434,100 tons to 591,202 tons.

Commenting on the outcome of the most recent ISU Annual Pollution Prevention Survey, president Jean Labescat says: "The increase on 1999 is significant, but the total of pollutants recovered is only half that of 1998, when a total recovery of 1.18 million tons was recorded." Labescat also discussed the sharp drop in the amount of chemicals involved in salvage operations and an expanded focus on the removal of marine fuels as the first step in casualty salvage - reflected in an increase of approximately 28 percent in the volume of bunkers recovered last year.

In 2000, ISU can be credited for the salvage of 310 salvage assistances reported in the survey recovered the following: 71 percent crude oil; two percent chemicals; 13 percent other pollutants; and 14 percent bunkers.

The amount of crude oil recovered was equal to approximately six spills of Sea Empress size. While there was a major reduction in the tonnage of chemicals involved in casualties, this was matched by an equally steep increase in the tonnage of other potential pollutants (such as slops and dirty ballast).

There was a substantial fall in the number of casualties requiring ship-to-ship transfer services — six, as compared to 20 in 1999. 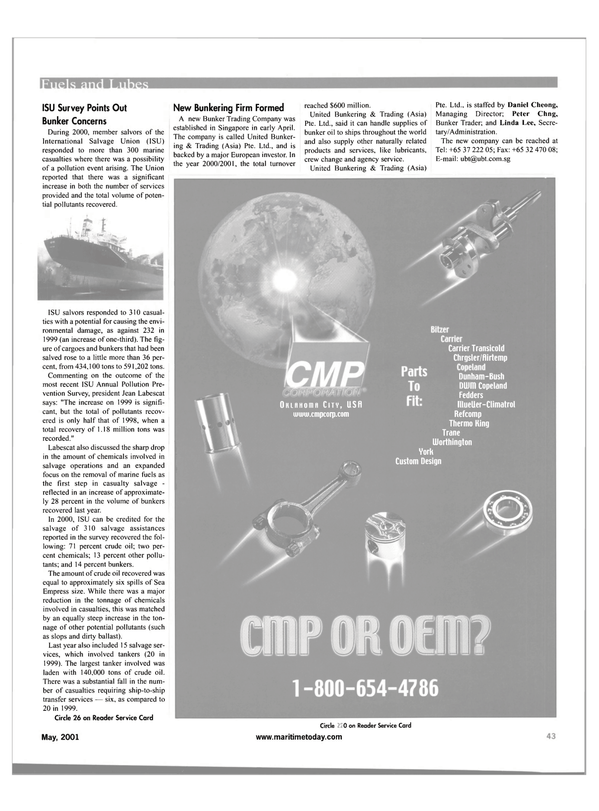