The latest testament to Finnish cruise ship building prowess is embodied in the recently delivered Carnival Spirit, a ship that will become well-known not only for what it contains within, but for what it does not let out.

Carnival Spirit, newbuilding no. 499, was built at Kvaerner Masa-Yards' Helsinki New Shipyard for Carnival Cruise Lines, and is the second ship in a series of "Panamax-Max" size ship.

(The first, Costa Atlantica for Costa Crociere, was delivered in June 2000).

Interestingly, the ship is unique because of its similarity to other vessels. The joint development of the Spirit-class series actually started in the mid-1990s, with KMY presenting its "Project 8000" vision to Carnival in 1994. Carnival's Joe Farcus then presented layout sketches of the new design, and the yard worked on fitting them on the lower part of the existing Fantasy-class design, as a common basis for a new Panamax design. Thus the idea of common platform ships for three different Carnival brands — Carnival Cruise Lines, Holland America Line, and Costa Crociere - was born, a solution which included similar hull structure, similar machinery arrangement and similar technical spaces. The common system obviously offered to Carnival attractive, and more cost-efficient, means of maintaining the ship.

While a walk through the ship allows one to quickly know that there is nothing else like this afloat - Farcus intermingled a variety of interpreted styles of Chinese, Art Deco and Egyptian, to name just a few - the parent company revels in the fact that the technical requirements of its burgeoning fleets are more easily managed.

No Smoking While the size is impressive, the vessel is most significant, however, as it is the first example of a joint Carnival/Wartsila NSD project to develop "smokeless" diesel engines, an environmental mandate increasingly heard from the residents of the natural environs within which cruise ships operate.

The ship is powered by a diesel-electric machinery arrangement, consisting of six Wartsila NSD 9L46D diesel engines, providing a total power of 62,370 kW. Each is connected to an alternator that produces electricity to the ship's main electric network at 11 KV 60 HZ 3 phase. Power from the main switchboard is supplied to 440V switchboards via three transformers to service auxiliary machinery and ships services.

According to Wartsila NSD's wellregarded R&D maven Daniel Paro, the EnviroEngine took just 14 months from the company's initial commitment to the project to first installation.

Carnival Spirit is propelled through the water to a service speed of 22 knots via a pair of 17.6 MW Azipod propulsion units. In addition, maneuverability is aided by three 1.91 MW bowthrusters.

In addition, the ship features a high level of redundancy to ensure safe operation.

Room with a View In addition to mechanical and environmental achievements onboard Spirit, the ship is sure to garner top marks from the owner and cruisers alike. The trend for more outside rooms and more rooms with balconies has been building for years. On Spirit, Carnival and K.MY deliver with an amazing 70 percent of all staterooms featuring a balcony - 80 percent of which are outside staterooms.

This was made possible, in part, by designing a narrower superstructure, which allowed one more deck with passenger staterooms. There are a total of 1,062 staterooms, and Spirit has a passenger capacity of 2,680. In the superstructure.

most of the staterooms face the sea. and the technical spaces, including the air conditioning machinery, are placed in the center of the ship, behind the passenger corridors. 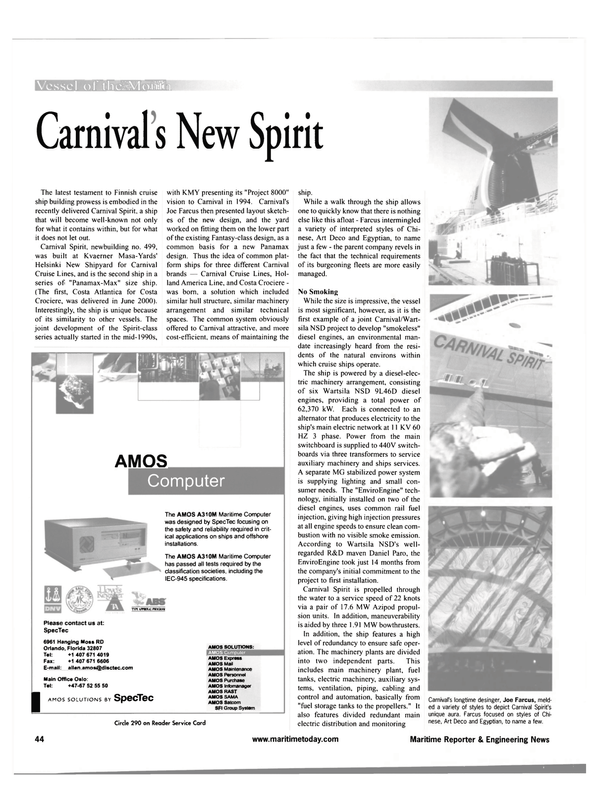