Although long in the vanguard of containership technology, Germany's Hapag-Lloyd did not feel compelled to join the early rush towards vessels of wider-than-Panamax gauge. Once the prudent Hamburg company decided to embrace the concept, however, it opted for one of the largest and most powerful embodiments of the post-Panamax genre to date.

Its planned commissioning this fall of the first of a new breed of 7,500-TEU linehaul carrier follows recent years' heavy investments in Panamax-optimized tonnage up to 4,890-TEU capacity, and signals a step change in unit scale economics applied to its Europe/Far East express service. The new behemoths will be of around 100,000-dwt and 80,000-gt, stowing 17 boxes abreast on the weatherdeck, within main dimensions of about 1,049 ft. (320 m) length, with a beam of 140 ft. (42.8 m) the latter being more than 34 ft. (10.5 m) in excess of the Panama Canal limit.

Although contract formalization only took place in March 2000, with steel cutting implemented as recently as February this year, delivery of the lead vessel is projected for October 2001.

Hapag-Lloyd's selection of Hyundai Heavy Industries as its contractual partner said as much about the perceived capabilities of the South Korean major in meeting such tough lead time stipulations as it did about the yard's commercial competitiveness.

At a reported price of S72 million apiece, relative to a high technical specification, largely unmatched slot capacity, and sustainable speed of 25-knots, there is no doubting the value to be obtained from the shipbuilding powerhouse on the Korean peninsula. HHI's ability to provide deliveries within 2000 for an entire, preceding series of seven 4,890-TEU vessels was a factor in the yard's favor when the German carrier came to consider the final shortlist for the 7,200-TEU newbuild project.

The fact that the detailed planning, which immediately preceded actual construction of the first ship at Ulsan took virtually as long as the build time pro- grammed for the vessel was a measure of the drive to balance efficient production with the owner's specific needs in terms of final design detail and equipment outfit. As with all complex and protracted discussions, a shipowner is looking to optimal cargo stowage, ease of operation and a service life of at least 25 years, while a shipbuilder has for competitive reasons to maximize standardization and promote production throughput.

The main engine selected for the first of the new Hapag-Lloyd quartet will become the most powerful diesel at sea.

A veritable 'cathedral' engine, the MAN B&W 12-cylinder K98MC is rated at 93,360-bhp (68,640 kW), providing the carrier not only with the raw power to make as much as 25.3-knots when 'fulland- down', where necessary, but also with the means of better ensuring yearround scheduling dependability through all the rigors of a deep-sea, long-haul trading environment. By adopting seven-cylinder versions of the K98MC series for its 4,890-TEU Panamax ships, the German company laid down a basis for assimilating valuable operating experience with the super-wide-bore, two-stroke class prior to the service entry of the post-Panamax ships. In addition, the 7K98MC had yielded a space saving of four meters relative to an alternative engine of similar power, helping to take the Panamax category to a new slot capacity level.

Relative to Hapag-Lloyd's 7,500-TEU series, the 9,200-TEU concept design recently developed by Germanischer Lloyd, in anticipation of upcoming projects by liner companies in Europe and the Far East, has a broader beam of 151 ft. (46 m), slightly longer waterline length of around 1,083 ft. (330 m) and marginally shallower draft of 47 ft. (14.5 m). The latest S-class newbuilds for A. 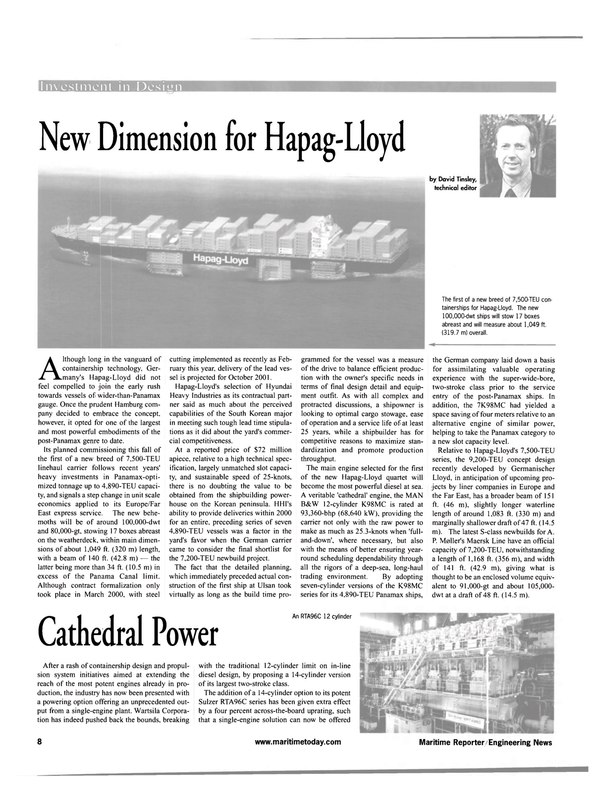 Read New Dimension for Hapag-Lloyd in Pdf, Flash or Html5 edition of May 2001 Maritime Reporter