"To him (William Francis Gibbs) it was the greatest ship ever built ... the greatest achievement of our greatest naval architect" Robert Hudson Westover. chairman of the S.S. United States Foundation As a child, I often noticed a framed postcard that hung in the living room of my parents' home in Long Island. It was a simple silver rimmed frame with blue matting that showed back and front of the postcard — the front depicting a large ship with red, white and blue smokestacks — the back holding an autograph of former President Dwight Eisenhower (see photo below). For years, I passed this by as if it were of no significance. However. I would have never thought that one day I'd be writing about this framed postcard. The "large ship " to which I am referring is the United States Lines flagship, the S.S. United States, which my mother, Evelyn (Sullivan) Ciardiello, traveled on from New York to Europe in 1963 — 11 years after the vessel held its maiden voyage on July 3, 1952. On the trip she met — and received the autograph of—former President Eisenhower. With the growing popularity and economy of transAtlantic air travel, though, S.S. United States was decommissioned in 1969, after a relative short 17-year run. After several failed attempts to buy and sell the ship, Norwegian Cruise Lines (NCL) announced that it had purchased the vessel on April 14, 2003, from Cantor Companies at an undisclosed price. NCL, which in a separate announcement has commenced its new Homeland Cruising brand, will undoubtedly add the United States to its new group of "America's ships," which will also include the two former Project America ships and American Hawaii's S.S. Independence that the line purchased earlier this year.

— By Regina P. Ciardiello, Managing Editor Constructed at Newport News Shipbuilding, (NNS), (now Northrop Grumman Newport News Shipbuilding), the "Big U," as it has come to be known, was literally a 'secret' for many years, because of its status as a prototype vessel for the navy. In fact, the vessel's tensile-steel hull design, and actual speed were considered classified information until the early 1980's. As the flagship vessel of the now-defunct United States Lines, this super liner surpassed speed records, and could be converted easily froma luxury liner to a troop ship. The 1,972-passenger vessel could then transport 14.000 troops anywhere in the world in 48 hours — an idea that was presented by the Pentagon and reflected the political environment after WWII. Definitely not a small undertaking. Therefore, it was decided that William Francis Gibbs. of New York-based Gibbs & Cox would be tapped to conceptualize this super ship.

Gibbs immediately chose to build the vessel at NNS. According to Robert Hudson Westover, chairman of the S.S.

"To him it was the greatest ship ever built...the greatest achievement of our greatest naval architect." Maritime historian Frank O.

Braynard concurs. He was a great admirer of Gibbs — enough so to write a book about his life. Entitled "By their Works, Ye shall Know Them," the book chronicles Gibbs' career.

Braynard, who traveled on the vessel often with his wife, Doris, and their two children, often compares Gibbs to that of a biblical prophet. He said that Gibbs sailed on the United States only one time — its maiden voyage.

According to Braynard, Gibbs only went traveling aboard vessels he designed.

Apparently, Gibbs was traumatized by a fire aboard, and ultimate sinking, of a vessel he designed — the Morro Castle, which went down off the coast of New Jersey. He designed the S.S. United States to be the safest ship afloat, liberthat one time because he had a fear of ally using aluminum and non-flammable materials.

Gibbs' granddaughter, Susan Gibbs, who serves as the United States Foundation's president, understood her grandfather's passion for his work, and the S.S. United States, even though she was just a child when the vessel was launched. "This ship was my grandfa- ther's 'baby,1 Gibbs said. "It was the apple of his eye." she added that her grandfather had begun to formulate the idea for the vessel as far back as 1913.

"He was in love with that ship," Gibbs said. "Every time it would come into the port in New York (where Gibbs & Cox was based at the time), he would rush over to see her." Even though Gibbs sailed on the vessel just that one time, his wife, Vera Kravath Gibbs, often traveled on the ship by herself, or with friends. Her granddaughter holds a piece of the vessel's history: Vera Gibbs' diary that depicts the atmosphere onboard the vessel during her many trips. "She created (through her diary) this fabulous picture of life onboard the vessel as something that was so festive and exuberant," Susan Gibbs said. "It was a stark contrast to the vessel that I boarded." Susan Gibbs experienced the ship for the first time when she became involved with the Foundation more than two years ago. What she saw was definitely not what her grandmother had experienced in the vessel's heyday. "At first my reaction was sadness," Gibbs said.

"But I didn't feel the ship had died, even though it seemed so depleted and shut down, there was still a spark of light there." Famous Firsts ... And Lasts "This vessel was built in 500 days — that's an engineering feat of mankind," Westover said. As the July 3, 1952 edition of Maritime Reporter reported on the S.S. United States: "Steam turbines, and reduction gears of modern design furnish the power to drive the propellers.

The boilers embody the latest ideas in development and construction and are designed to deliver high pressure, high temperature steam as required to the propulsion units, other steam driven auxiliaries and services dependent upon it." With its main steam propulsion equipment built by Westinghouse Electric Corp. and driving quadruple screws, the vessel's power plant was described as a "triumph of American engineering, meeting the requirements of the U.S. Navy, U.S. Coast Guard, MarAd, ABS and SOLAS." There have been talks, according to Westover, to keep the vessel's original power plant. "I think NCL will be pleasantly surprised to realize that to get her up and going isn't going to be as expensive as they think," he said. "I know this because I have been onboard with various chief engineers that have been aboard the United States, who have experience with these ships." The speed of the S.S. United States was nearly as legendary as the ship itself, reportedly hitting 44.7 knots during speed trials, according to Westover.

"The engineers finally brought her down three knots, which they apparently held for two hours," Westover said. "Of course it's disputed by many people. I don't know I'm not a maritime expert, but this was just what I was told by several people, including the vessel's chief engineer." Over the years, the vessel logged more than 2,772,840 million miles and carried more than 1,002,936 passengers during its 17 years of service. During those years, many celebrities frequented the vessel, but perhaps the most famous (and oldest) of these A-list "passengers" was the Mona Lisa. The famed painting was transported back from an exhibit at the Metropolitan Museum of Art in New York City, to her home in Paris, France at the Louvre. The painting, which was on loan for a few months to the museum back in the 1950's, even had its own stateroom. According to Westover, the French felt that the United States was the only ship it could trust to bring the painting back to its homeland.

In addition to the vessel's transatlantic speed record, of three days. 10 hours and 40 minutes, it held a flawless repair record as well, never once delayed for mechanical reasons, and in its 17 years, never broke down, only making regular maintenance calls.

Sadly though, the vessel was decommissioned in 1969, as the glamour of the transatlantic crossing by ship gave way to the faster, more economical airplane.

The ship was left tied to a dock at NNS following its decommissioning, where she was attended to by MarAd.

According to Westover, since the vessel had been designed with such classified designed specifications, the Pentagon stipulated that it could never be sold to foreign interests.

It was not until some years later, 1979 to be exact that it was bought by Richard Hadley a businessman from Seattle, who wanted to create a company called United States Cruises. With the idea in mind of restoring and refurbishing the super liner, Hadley's ownership, reportedly did more harm than good. He decided to sell off many of the vessel's artifacts and fixtures via a public auction in October 1984. The vessel's interior was literally stripped.

Following the auction the vessel sat unattended until 1992 when a group of individuals formed the SS United States Preservation Society. Led by Bill DiBenedetto, this consortium wanted to convert the historic liner into a modern day cruise ship, not in the U.S., but at a Turkish shipyard. Since the vessel's once designated classified design information had been reportedly revealed in the early 1980s, it was now available for purchase by foreign companies.

Therefore it was towed by just one seagoing tug, to its resting place in Newport News, Va. to Istanbul, Turkey, where it again, sat unattended.

Edward Cantor, the only surviving member of the now-bankrupt consortium that was formed in 1992, purchased the vessel in 1996, for $7 million.

Cantor, who was a New Jersey businessman, had always dreamt of owning the United States. He had it brought back to the U.S., this time to the Delaware River, where it remained tied to a pier along the Philadelphia waterfront until it was 'saved' by NCL. While NCL would not divulge its future plans for the S.S.

United States, the line's president, Colin Veitch, did say that its itinerary will not focus on Hawaii as the recently purchased Project America ships, but rather mainland coastal cruising for its new Homeland Cruising brand. Veitch also told MR/EN that the line would not have normally announced a project so early, but felt the need to do so to dispel any industry rumors.

Since the process is still is still in its infancy stages, Veitch could not say which shipyards would be responsible for the vessel's total overhaul. He did however provide a break down of whom he would contract for specific projects. "In terms of experience, it's more practical to have a U.S. yard work on the vessel's hull and superstructure, and to have a European yard perform the outfitting." Would Veitch use the same tactics in choosing a design firm for the vessel's interiors? "It's too early to say," he said. "It doesn't make a difference (European or U.S.), but rather who has the ability to best capture the vessel's spirit." He also expressed the line's desire to connect with Westover and the United States Foundation. In fact, NCL's director of communications, Susan Robison was present at the Foundation's first chapter meeting that occurred just a few days after its initial purchase, and that both Robison and Andy Stuart, NCL's senior VP of sales and marketing, have plans to meet with Westover to discuss the vessel's future. 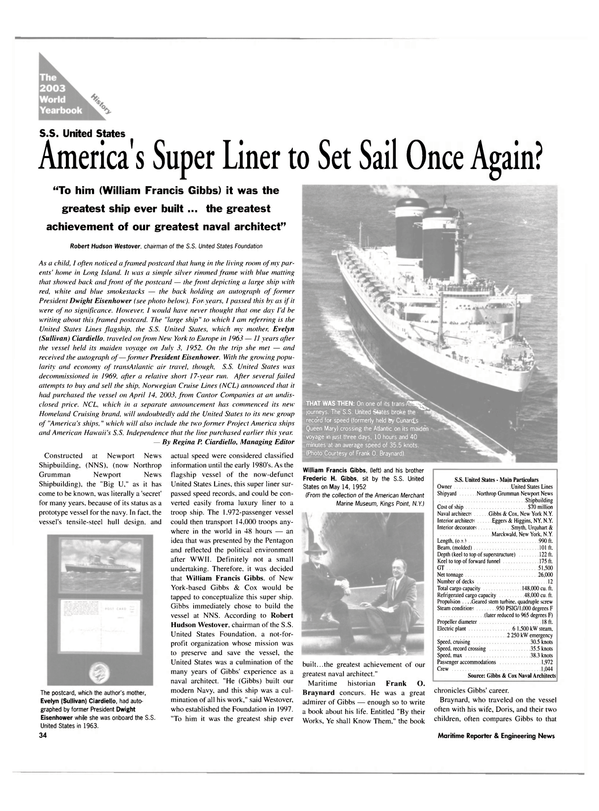