Seabulk Contracts for PSV in Brazil

finalized an agreement with Promar Brazil (Estaleiro Promara I) to build a UT-755L platform supply vessel (PSV) for delivery in the fall of 2004, with an option for a second ship. To be named Seabulk Brasil, the 5,460-hp, 236-ft.

(71.9-m) newbuild has a purchase price of $16.7 million, and upon delivery, will enter the Brazilian offshore market, where the company currently has one 200-ft. PSV operating.

The company has also agreed to purchase a Brazilian-flag line-handling vessel for approximately $2.5 million. The purchase of the vessel, to be named the Seabulk Ipanema, is expected to close in July 2003. Similar in design to Seabulk Offshore's new PSV flagship, Seabulk Africa, which joined the West Africa fleet earlier this year, Seabulk Brasil will be equipped with Fire Fighting Class 1 and DPS Class 1 certification and high-tech communications and navigation equipment, including GMDSS up to A3 regions.

Rolls Royce Marine is providing the UT 755L design and a substantial amount of equipment for the vessel. 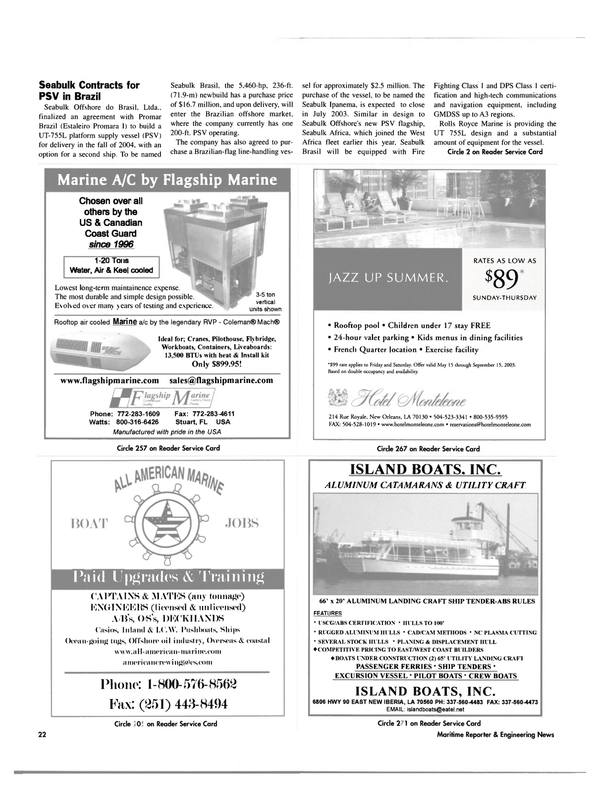