Salvage Posture Changing With The Times

S a l v a g e response in the United States, and to a considerable degree throughout the world, has evolved to become essentially a new industry as measured by historical precedent.

There are five principal factors, which have forever changed maritime casualty response to the point where it will never again rely on risk and compensation based solely on the value of property saved. These five factors, which have effected this change in marine casualty events in the United States, are: Environment, Regulation, Security, Technology and Salvage Cooperation and Communication 1. Environment Little needs to be said about the impact of the environment. We have all been aware of the increasing, persuasive impact of environmental factors for years. Simply put, it permeates and drives every emergency solution. In its infancy, and even today, environmental considerations can stall and complicate an effective, prompt salvage by extending the beginning of performance beyond a reasonable timetable. We must evolve prompt solutions within the context of environmental needs. This simply requires a combination of experience, logic and adaptability applied with reason to the total solution. While we all recognize the necessity to conduct all operations with a view toward maximum environmental protection, all too often the priorities of all of the interested parties who contribute to our ICS (Incident Command System) become argumentative, combative and confusing to the point of creating almost unsolvable obstacles to a prompt salvage. We must continue, in the U.S., to evolve a system which provides that maximum environmental protection is a primary focal point, yet recognizes the need to adjust priorities to the totality of an effective solution.

2. Regulation The impact of regulatory authorities in the United States continues to grow.

Beginning at the federal level, with ulti- mate power of the on-scene federal commander in the person of the local district Coast Guard Commander, through the power of the involved state, the local county or district and ending with the local municipality; there are numerous, (often conflicting, and at times, competitive) issues to be resolved. Although there is no structured, identifiable component of the response system called politics, there is not a significant incident where local.

state and federally elected representatives do not attempt to influence the result, often from a media or public relations platform.

The implementation of, and control of.

the solution to a marine casualty in the United States is the I n c i d e n t Command System. Having evolved out of forest fire fighting response, its intent was originally to bring together a small group of experienced firefighters under an existing organizational structure to assure a rapid professional and effective response. Since the fighting of fires has been the province of a small group of dedicated firefighters, trained and professional, it is often the same individuals and equipment who participate in the fire fighting process. It is also almost exclusively conducted in remote areas, highly dangerous and a continuously moving event. Although similar in that both are emergencies, the marine ICS has grown to a huge number of participants that can complicate the solution.

ICS in any major casualty has moved from a compact group of experience to a large group with multiple and competing interests.

In an effort to better identify and integrate the position of the salvor in his response to an emergency in the United States, the U.S. Coast Guard has evolved a series of new regulations.

These new regulations are a welcome change from the past where the captain's brother-in-law could serve as salvage master in the interest of economy. These regulations have been published for comment and the public hearings have been closed. The latest information expects final publication by late spring of this year.

The regulations represent a very comprehensive approach to salvage utilization in the United States in the future.

The burden has been placed on the shipowner to essentially name and contract with a professional salvor operating in the United States in order to do business there. Professional standards and timeliness of response are critical components of the Regulations.

Because these salvage regulations have emanated from the Oil Pollution Act of 1990 (OPA 90), the new regulations apply to vessels carrying oil only. There are some that say they are too complicated.

It is interesting to note that the same objections were made to the initial passage of OPA 90. Looking back over the last 12 years, there are few. if any, who would argue that in terms of reducing marine pollution in the U.S., OPA 90 has been very successful. U.S. salvors and the American Salvage Association (ASA), have endorsed the regulations, and in addition, have suggested they be extended to all significant commercial vessels, which trade to the United States and within its harbors and rivers.

There has been one legal impact in the United States, which is counterproductive.

That is the move toward the imposition of criminal liability in instances where, at best, there exists negligence, which should impose a civil liability only. There is the real threat and reality that criminal sanctions are to be imposed. This cannot be insured against, and poses a significant threat to the salvage community. The only answer is responder immunity. One who responds to a casualty to solve a problem and has no hand in creating it, should not be subject to the specter of criminal liability, no matter how remote.

3. Security Since September 11, 2001. emergency response capability throughout the United States has had to plan for the unforeseen terrorist threat. The threat from the maritime sector has been iden- tified by the U.S. government to be one of the most probable alternatives.

Containerized shipping, bulk carriers and tankers have all been identified by our government as primary possibilities to possess terrorist event capability. Add to this threat, bridges, terminals and other reachable structures in any U.S.

port and one can easily see that the consequences may be catastrophic. The U.S. salvage community must assess its value as a contributor to a solution of both prevention and response. This entails time, training, capital and further communication and cooperation with federal, state and local forces to first identify and quantify the need and then promote a best case response within a practical planning and response framework.

The ASA is working together with the Coast Guard and local ports with contingency planning and the identification of salvage response assets.

4. Technology Technology has been accelerating at a tremendous rate over the last two decades. Computerization, communication, on water and under water navigation, positioning and salvage tools have an ever increasing capability limited only by the economic restraint of return on investment. While technology, as well as environmental necessity, expanded the operational areas of what is now salvageable, deep water recovery, new oil extraction and pumping capacity, increased heavy lift capability, dynamic location and positioning to name a few, there is still the need for the salvor to tool-up and train for these new capabilities at his expense not being able to assess a return on investment based on unknown future casualty response. To a limited degree, the promotion of fair and reasonable retainer to the salvor through the implementation of the new salvage regulations may be a partial answer.

5. Salvage Cooperation And Communication The ever-increasing complications of salvage in the United States have unintentionally driven salvors to seek opportunities to exchange information and cooperate. The proposed new salvage regulations provide for an owner/operator to list multiple salvors in order to assure complete geographic coverage as well as cover the multiple tasks required of the salvor. As an example, it is extremely difficult for a single salvor to provide six-hour, on-site response to all 47 Coast Guard districts. It is also difficult for some salvors to provide all the listed activities in the time frame required, especially in the unusual event that they may have multiple engage- ments at the same time.

One of the answers has been the American Salvage Association (ASA).

With a total active membership of 12 companies, including one Canadian company, the intent is to increase the professional nature of response, educating the public to the importance of salvage, review regulatory and governmental influence to assure continued successful response, provide training of a new salvage generation and foster the abovementioned communication and cooperation among salvors which is critical to promote effective solutions. A growing associate membership, composed of those who have an interest in and recognize the importance of salvage response, has also given additional support, advice and an outside perspective to the ASA. 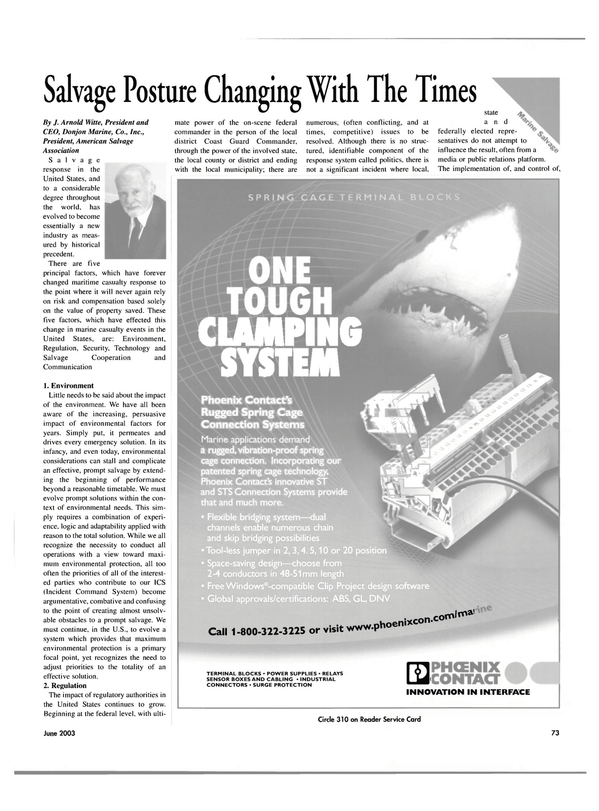