MR/EN had the opportunity• to speak with Admiral Robert Natter, Commander, Atlantic Fleet, Fleet Forces Command, who is not only responsible for one of the largest fleet of Navy ships in the world, but directs the effort to design the Navy of the future, including development of the Littoral Combat Ship (LCS).

Admiral Robert Natter, Commander, Atlantic Fleet, Fleet Forces Command, is the man at the top responsible for ensuring these forces are ready to successfully carry out the mission as dictated by the President. As if that is not enough, Adm. Natter is leading the effort to develop the weapons and systems that will serve to keep the Navy productive, efficient and safe well into this century.

Littoral Combat Ship (LCS) The Navy plans to spend nearly $4 billion through fiscal year 2009 to purchase nine ships that will support a variety of missions, including anti-submarine and anti-surface warfare and mine warfare. Perhaps the most exciting new project under development now is the effort to design the new class LCS. The LCS is the culmination of years of study, and embodies many of the principles the military seeks to advance in the nextgeneration of assets: the network-centric approach which allows all units, from troops on the ground to aircraft in the air to vessels at sea to be "plugged in" to each other. The LCS. regardless of a final form, will be a smaller, faster, m u l t i - o p e r a t i o n capable vessel able to operate closer to shore. In fact, Admiral Natter points to the recent war in Iraq as validation of the LCS concept. (The war in Iraq) confirmed the very positive investment in longrange, time-sensitive weapon strike (toma hawk), and it also confirmed the value of high speed vessels able to operate in confined and shallow waters, supporting special opera tions. Adm. Natter said.

Fleet Size The number of ships in the U.S. Navy is continually debated, an argument which is laced liberally with political rhetoric and differing estimates — from funding to fleet size — from the military and civilian sides. While this may make it difficult for outsiders to ascertain the true number of ships needed for the nation's defense, one thing that is indisputable.

however, is that the U.S. Navy / A is in dire need of increasing its number of newbuilds now, with the cumulative fleet age and size shrinking appreciably every year.

The Landrieu bill makes it the policy of the United States to return to a Navy of a least 375 ships — the amount recommended by the Chief of Naval Operations. It is reasoned that the build up would increase port security and secure shipyard jobs throughout the country. "With a current force structure well below Department of Defense requirements, our current policy is unsustainable," said Sen. Landrieu, a member of the Senate Shipbuilding Caucus. "Our Naval forces play a vital role in securing our ports and contribute to our operations in Iraq and Afghanistan. These bases at sea project rapid and decisive power anywhere in the world." The Navy currently has 301 ships in the fleet, nearly half the number compaof ships in 1987. It is safe to say, however, that the time to rebuild naval forces is now, and with the current programs to build the DD(X) and LCS families, as well as the soon to be introduced carrier design, it appears this is the course being taken.

"From my perspective, the issue centers on investing in new tech and having sufficient force levels to take care of any scenario," Adm. Natter said. He added, though, that force structure should not be based on thought of a single scenario.

Adm. Natter contends that it is much better to invest in a capability, and having the sufficient force size and structure.

The change currently undertaken by the Navy should not be underestimated, and is historic in nature, as the core essence of the fleet changes to meet emerging and future demands. Adm.

Natter, who counts Sail to Steam, Iron to Wood, Weapons with Revolving Turrets and Nuclear Power as a handful of major turning points for the U.S. Navy since its inception, said that new technologies, particularly the continued integration of electric drives in ships, will speed the evolution of the fleet in the coming decade. While the ships and military technologies rapidly evolve, Adm.

Natter is secure in the role of the Navy as a preeminent force of the U.S. "The relevance of naval power today is more important than it has ever been in the history of war," he said. We have unimpeded maneuvering space, and the new weapons and technologies allow for much longer range and greater accuracy, allowing us to reach anywhere, anytime. 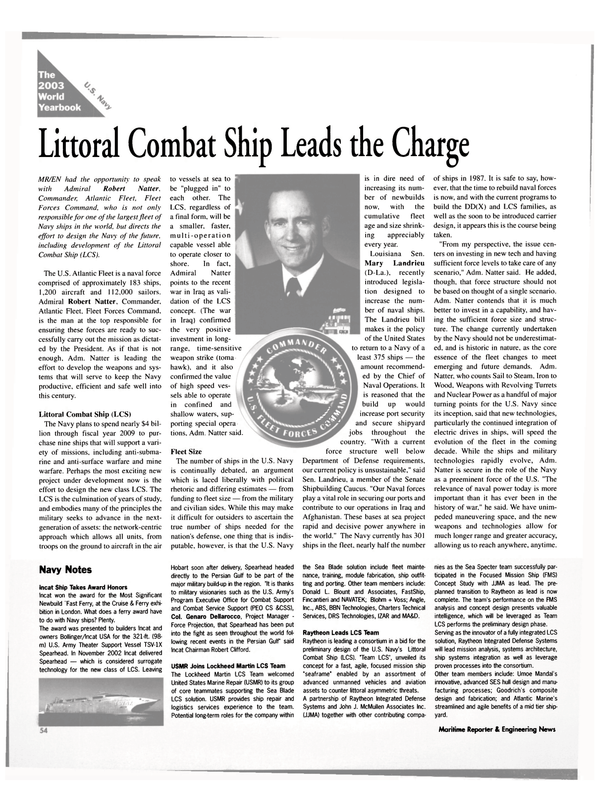