The GOM region, which has one of the more complex subsea piping systems in the world, is ripe for the shuttle tanker solution as the search for oil and gas pushes further from the shore. The question then does not center on "if," but rather "when." American Shuttle Tankers (AST) is touting its S-SS, or Separate Storage Shuttling solution. The system is unique in that it works with any floating production system — a key point given the fact that there are zero FPSO projects currently underway — including semisubmersibles, spars and Tension Leg Platforms. The system uses the production platform, a DPS enabled shuttle tanker alongside, which acts as a storage facility, and a shuttle tanker that is used to transport the production to market. While AST would have to build the transporting shuttles in a U.S. yard to comply with Jones Act regulations, it would employ Navion shuttle tankers as the storage and transfer units, which would not have to comply with Jones Act rules.

Employing DPS enabled shuttle tankers from the North Sea as an FSO in the S-S-S concept is truly a hinge to the project, as it allows the system to be functional much more quickly.

In addition, the DPS capability allows for the elimination of permanent mooring, an estimated $80 to $100 million cost in some GOM deepwater regions estimates Peter M. Lovie, V.P Business Development of AST.

As with many other great innovations, the driver behind SSS is money, specifically economizing the process of moving oil from production site to refinery. According to Lovie, direct shuttle loading in the Gulf of Mexico, sans FPSOs and taking into account the average production rate of 50,000 bpd for most offshore facilities, is simply cost prohibitive, with an estimated 10-day load period for 565,000 barrel shuttle tanker directly connected to a production source. The SSS solution allows for faster turnaround times for shuttle tankers transporting oil back to port, a turnaround measured in hours instead of days. 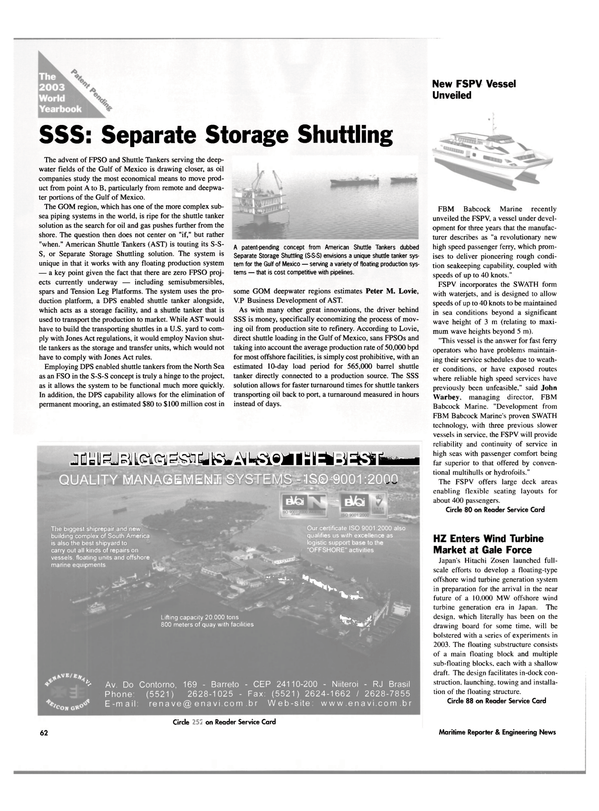