Pollutant emissions produced by the global merchant fleet has always been suggested to represent a considerable contribution to anthropogenic emissions, with nitrogen and sulfur compounds being currently in the focus of public's interest. Emissions such as nitrogen oxides, NOx (the sum of NO and N02) lead to enhanced tropospheric ozone formation over their natural background level and thus affect the greenhouse warming. A considerable portion of ship emissions is released far off the continents — in clean areas of the atmosphere. This particularly effects the southern hemisphere with its natural low emission level.

So far. all earlier known studies result in an annual NOx emission release by the merchant fleet in the order of 10 million tons of NOx based on a total global marine fuel consumption of about 140 - 150 million tons per year. However, when these figures are crosschecked against the necessary international bunker demand as estimated by the installed main engine power onboard of approximately 90,000 ships of 100 gt and over as well as by adopting realistic average engine loads and engine running hours in one year across the existing fleet, it seems bunker consumption is much higher, resulting in a corresponding increase in NOx and all other pollutant emissions such as SOx, carbon monoxide, hydrocarbons and particulate matter including soot. Quite obviously, the effects on atmosphere and climate are much stronger than suggested in the past.

This is reason enough to calculate ships' annual bunker fuel consumptions and NOx (and other) exhaust gas emissions more accurately. This was performed by MAN B&W for the year of 2001, taking into account approximately 90,000 ocean-going ships with an accumulated total installed main engine output of 286,000 MW. Emission produced by the auxiliary engine equipment was calculated too, by assuming, across the whole fleet, a total installed genset output of 13 percent of the installed main engine output.

Besides, the calculation took into account NOx emissions from port and coastal traffic. The exact methodology for estimating pollutants from ships has been described elsewhere '(Koehler, 2002); 2(Koehler, 2003). Interestingly, the results of the study seem to be widely independent of the adopted calculation approach: two different calculation approaches showed surprisingly low deviations in bunker consumptions (less than one percent) and emissions (less than seven percent).

In order to start the calculation, the 90,000 vessels were grouped into 11 main ship classes. For each of these main classes, the number of ships, the number of their prime movers and the corresponding total installed engine power were defined, with sub-divisions of these ships made according to their size and installed engine output, respectively.

Allowance was made so as to give separate considerations to various prime mover types: low-speed twostroke diesel engines, medium-speed diesel engines, high-speed diesel engines, steam turbines, gas turbines and other or unknown propulsive power plants. The next step was to define typical annual engine running hours and average engine loads across the year for each ship type and size in the main and the sub-classes. Sales engineers, consultants, shipyards and operators provided these figures upon request, which according to our definition included low-load operation and even idling periods, i.e. ships' operation in ports and maneuvering is fully taken into account.

Typical annual running hours used for the MAN B&W study range from 3,500 hours for gensets up to 7,200 hours for large crude oil tankers. The average annual engine load (in relation to the maximum installed engine power, MCR) varies between 50 percent for typical gensets and 75 percent for the main engines of ships such as bulk carriers or container vessels.

With these data, the fuel consumption in each ship class and sub-class was calculated for 2001, including the auxiliary engines. The consumed bunker fuel totaled 281 million tons, of which 191 million tons is heavy fuel oil (HFO), and 90 million tons is diesel oil (MDO) and/or gas oil (MGO).

The calculated fuel consumptions for the various ship classes in the study must be multiplied by the so-called NOx emission factors. These factors are derived from measured fuel consumption and measured NOx emissioins via engine load for as many engine types, sizes and makes as possible. These emission indices depend mainly on engine size/speed and load, and range from a minimum of about 40 kg NOx per ton of fuel (typical high-speed diesel engine, burning clean gas oil) up to 140 kg/ton plus for a large-bore, low-speed two-stroke diesel engine running on poor-quality heavy fuel oil. Quite a few of correction factors had to be introduced into the calculation procedure.

A very important one took into account that, in terms of installed engine output, 86 percent of all ships are driven by old and unregulated engines and only 14 percent by NOx-optimized state-of-the-art prime movers. Of course NOx emissions depend on the quality of the fuel used, with HFO producing more NOx than MGO or MDO. Total NOx emissions in 2001, again including the emissions produced by the auxiliary engines onboard, was estimated to be 22 million tons, again more than twice of the NOx emission level reported in the literature so far.

This result shows that the introduction of more and more ships with modern low-emission engines is mandatory. Since every year more vessels with NOxoptimized engines enter the fleet and older ships with unregulated engines are being-laid off, annual NOx emissions from shipping will decrease, however in a slow process especially in times when the newbuilding business is down.

All diesel engines for new ships with keel-laying since January 2000 comply with the IMO NOx limit.

For a typical four-stroke engine in the 5 MW power range with a speed of some 400 rpm, the allowable upper NOx emission is 13.5 g/kWh (cycle value). But the engine industry already has developed NOx reduction technologies, for instance by introduction of water into the combustion space, to reach emissions of as low as 6-8 g/kWh. Even lower emissions than that, i.e. 4 g/kWh, is achievable today by humidifying the compressed intake air. The lowest possible NOx emissions, approx. 2 g/kWh, are possible by selective reduction technologies (SCR).

Needless to say that such equipment will increase the price tag of a marine engine and also operation and maintenance costs as well as the necessary machine room volume. 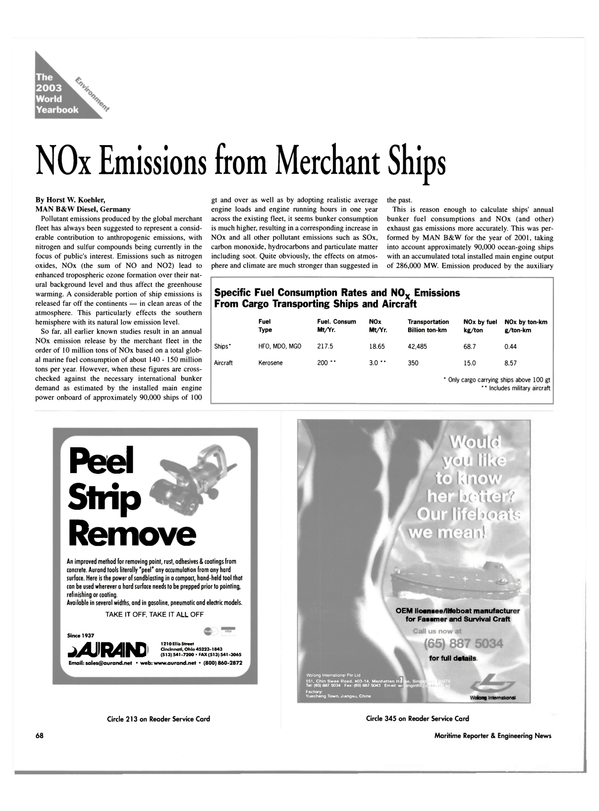