The Merrimac Ferry, which crosses the Wisconsin River between Sauk and Columbia counties, is Wisconsin's only free ferry. It shuttles WIS 113 traffic between Okee on the east bank and Merrimac on the west. In the 150 plus years that a ferry has operated at this location it has been propelled by muscle, river current, gasoline engine and diesel.

Most recently it has pulled itself along on a pair of cables crossing the river.

The ferry is so popular that it has not been replaced by a bridge and. in spite of nearby bridges, car loads of tourist line up regularly to ride it. The ferry's popularity is such that this past winter a larger 15-car vessel has been built to replace the existing 1960s era 12 car Colsac II. To be named the Colsac III.

105 x 44-ft. (32 x 13.4 m) boat was built by Basic Marine of Escanaba Michigan to a design by naval architect Timothy Graul. Power for the ferry will be provided by a single Cummins 6CT8.3- D(M). A single generator will be operated off the front of the engine and a pair of hydraulic pumps off the rear. One pump is for the ferry ramps while the other is for propulsion. The ferry, which has additional ice strengthening, will go into service this spring. 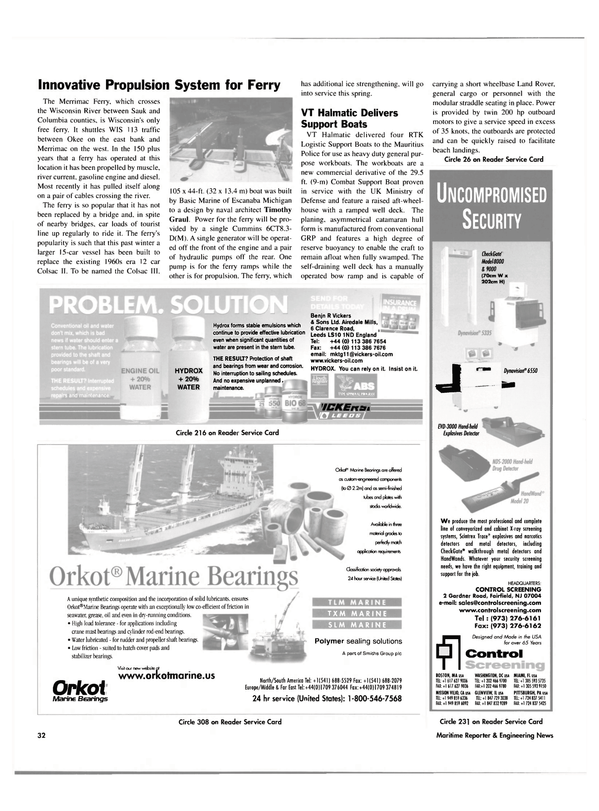