95th Anniversary of the Burning of General Slocum

The annual ceremony will be held on Friday, June 15, 2003, at 11 a.m., in the playground at Tompkins Square Park, East 9th street and Avenue B. Manhattan, by the Slocum Memorial Fountain. The burning of the excursion steamer GENERAL SLOCUM, is the worst peace - time inland water's maritime disaster in the nation's history and the largest fire fatality in New York City history. The wooden steamer caught fire in the infamous Hell Gate passage in the East River between the Bronx and Astoria, Queens. Some 1,200 people were drowned or burned to death, including 61 never identified The Slocum Memorial Fountain is located in the neighborhood of the city that was once known as "Little Germany," where most of the Slocum victims lived.

Mrs. Adella L. Wotherspoon, 97, one of two living survivors of the General Slocum disaster will place a wreath in front of the fountain.

The annual event is co-sponsored by the Maritime Industry Museum on the campus of the SUNY — Maritime College in the Bronx and the New York City Parks and Recreation Department. Park's commissioner Henry Stern will be one of the speakers. 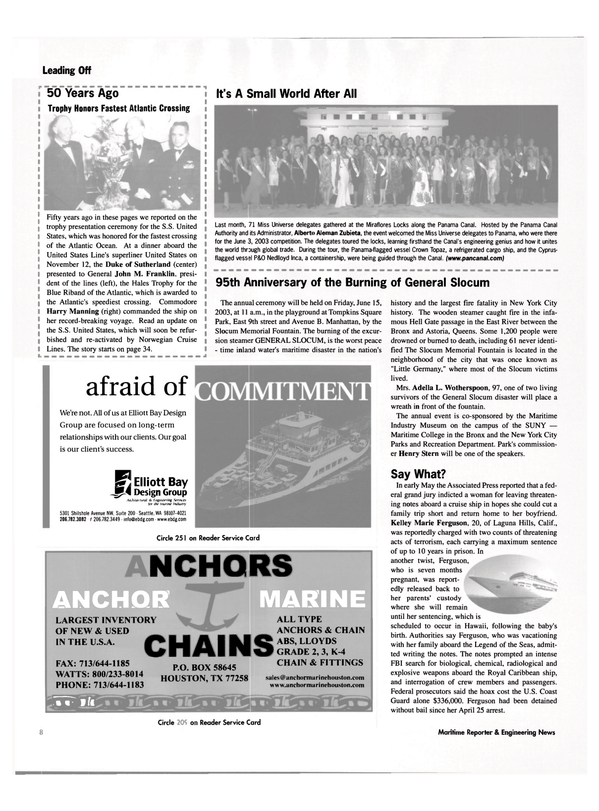 Read 95th Anniversary of the Burning of General Slocum in Pdf, Flash or Html5 edition of June 2003 Maritime Reporter