A landmark decision to use liquefied natural gas (LNG), instead of diesel oil, to fuel a new class of offshore support vessel has taken operational form on the Norwegian continental shelf after a three-year development process. The platform supply ship Viking Energy is the result of a concerted effort to provide a versatile, sophisticated vessel promising much reduced environmental impact. The project emphasizes the Norwegian coastal industrial community's propensity for innovation, and for working together to bring new ideas to fruition. Although bunkering on LNG has meant a higher capital outlay on the newbuild project, the vessel is expected to yield about 200-tons less in oxides of nitrogen (NOx) emissions every year compared to a ship burning oil. In addition, carbon dioxide release should be significantly reduced.

Charterer Statoil, which has made a 10-year commitment to Viking Energy and to a second such newbuild from west Norwegian shipbuilder Kleven Verft, can use the savings in pollutant emissions as a quota to offset other operations.

Under an agreement between the energy group and the Norwegian authorities, emission reductions achieved with the new vessels can be credited to Statoil-operated facilities on the Norwegian coast, where Nox curtailment measures cost much more. In addition, the development will help Norway realize goals set by the Kyoto agreement.

Although an earlier Norwegian initiative saw the entry into service of a 312- ft. (95-m) fjord ferry, Glutra, incorporating plant designed to burn LNG fuel, the arrangements adopted for the two new platform supply vessels have given an enormous fillip to the development of the natural gas supply infrastructure.

Viking Energy is expected to use about 7,000-tons of natural gas every year.

This allows for improved economics in establishing LNG bunkering facilities at locations along the Norwegian coast to provide fuel for an anticipated, growing fleet of gas-fuelled vessels.

The Eidesvik-owned Viking Energy, and the sister newbuild contracted by Simon Mokster Shipping, are based on the VS4403 design developed by consultancy Vik-Sandvik. The vessels will be deployed out of the Coast Center Base near Bergen, supplying consumables, materials and equipment to oil and gas installations in the North Sea.

The ships have a deadweight of 6,013- tons at the summer draft of 26 ft. (7.9 m), and offer a large open, working deck plus a diverse underdeck storage capability within main dimensions of 308 ft.

(94 m) in length with a 67 ft. (20.4-m) beam. Each is installed with four main generator sets, individually rated at 2,010-kW, supplying electrical power for propulsion and shipboard services.

ABB was entrusted with the electrical system, and the prime movers for the gensets are six-cylinder Wartsila 6L32DF dual-fuel engines, conceived to ingest gas or oil in any proportion.

While employing the gaseous fuel at low pressure, reliable ignition will be ensured by injecting a minute quantity of diesel oil directly into the combustion chamber as pilot fuel. For minimum emissions, the vessels will run on LNG, but should the vessels move away from an area where gas can be bunkered, the engines can operate on diesel fuel.

LNG is contained in stainless steel.

horizontal tank protectively located in the middle of the vessel. It comprises an inner and outer chamber, and employs a gap of 300-mm between the two, maintained under a high vacuum to insulate the LNG at minus 162-degrees Centigrade from the surroundings. The liquid gas is vaporized for delivery to the engines at about 20-degrees C and 5- bar pressure.

The endorsement of such a system through these bold investments can be expected to stimulate interest in the uptake of the technology across a broader front in the shipping industry. 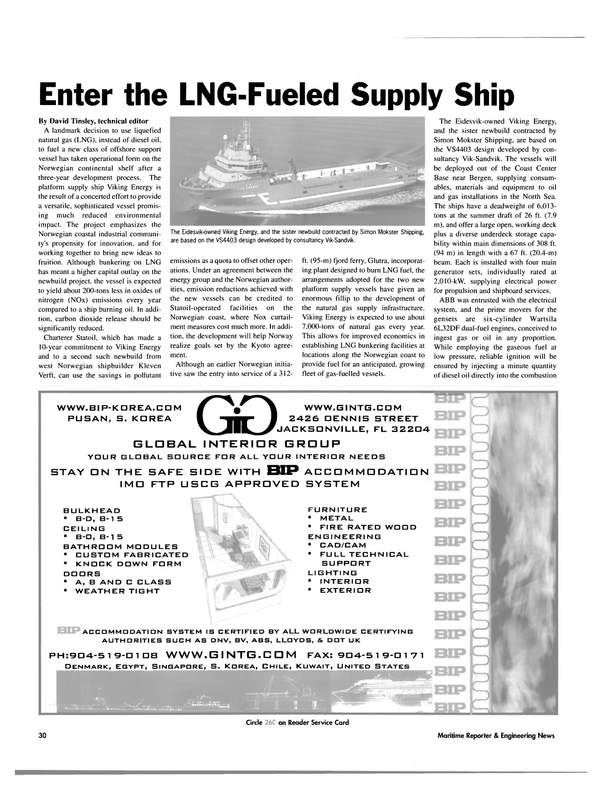