For years, general manufacturing companies have enjoyed the benefit of laser cutting systems for producing complex or simple parts in batch volumes as low as one, and as high as tens of thousands.

The laser is an incredibly powerful tool that remains unsurpassed in manufacturing activities across the world. As flexible and reconfigurable production tool that provides welding, cutting and machining capabilities in a single device, lasers are readily automated and have demonstrated that they can easily operate in "lights-out" mode for even greater productivity. With all this said, why aren't there any laser shipyards?

Why hasn't one of the worlds largest and most important transportation industries rushed to implement laser cutting and welding technology? The answer is that the development of the state-of-the-art laser manufacturing technology has been a long and grueling process. Early lasers were just not powerful or reliable enough to attract an industry that had the capability to process heavy section metals using low cost and reliable technologies such as oxy-fuel and plasma cutting, with MIG and TIG and submerged arc techniques being the process of choice for welding. Even the Lloyds approval for laser welding of ship plates has yet to see lasers become commonplace in shipyards. The situation today is rather different. Lasers are now being employed commercially in thick plate cutting and welding and the industry has witnessed a quiet and rather successful processing revolution.

A new, and unexpected, breakthrough in the laser industry occurred in November 2002 at Bender Shipbuilding & Repair in Mobile, Ala. It was there that the first commercial use of the LASOX process cut through two in. of steel using a new cutting principle industrialized by Wayne Penn and his team from Alabama Laser. Co-developed by BOC Gases Ltd. and Dr. Bill O'Neill while working at the University of Liverpool, the LASOX process requires approximately 1 kW of laser power and uses oxygen to provide the cutting energy while the laser is used to maintain and stabilize a pre-heat - similar to the gas flame in oxy-fuel cutting.

With O'Neill and his team working on the thick section problem for more than a decade, commercial laser cutting has pushed the section limit from around 15 mm in 1990, to around 30 mm in 2003, with a subsequent increase in laser power from 2kW to 6kW. The process remains the same except the size of the process window is inversely proportional to the plate thickness. Prior to the invention of LASOX, it was a daunting process to cut pieces of high thickness.

As a result, there is always the temptation of turning up the power and the gas and just "letting it rip. While the LASOX process, however, will reportedly have the ability to produce the fastest scrap metal production system in the world, it will not, however, solve the problem of producing laser cuts up from 50-75 mm. "A year ago, cutting steel thicker than two inches would have been unheard of with a 2kW laser - one in.

being the maximum cutting depth undertaken commercially." said Pat Cahill, research and development manager for Bender Shipbuilding. "This process has the potential to cut steel plates as thick as four in. Currently highpowered plasma cutting is limited to three in. This development opens up the possibility of a new generation of steel ships that are stronger and cheaper to build." v With BOC Gases and the University of Liverpool providing the basic technology and process license for LASOX, Alabama Laser Systems carried out pre-production development of the lab based process and the integration into the existing laser cutting system at Bender Shipbuilding. The installation has been so successful that full installations at Caterpillar, for their heavy duty mining equipment; and General Dynamics - Electric Boat, for use in the building of submarines will be completed three months ahead of schedule.

In The Beginning LASOX cutting is the result of 13 years research by Dr. Jack Gabzdyl.

BOC's market development manager at the U.K.-based Fabrication Technology Center in Wolverhampton and Dr. Bill O'Neill formerly of the University of Liverpool, and now working at the Institute of Manufacturing at the University of Cambridge, UK. BOC Gases awarded O'Neill a Royal Society Industrial Research Fellowship to conduct a four-year study on laser cutting in 1990 - the outcome of his work being the LASOX process. O'Neill had been working on the thick section cutting problem by examining the dynamic effects of melt and gas flow through deep section kerfs and became convinced that the problem could be solved by forgetting the conventional laser cutting approach. "In 1990 the Holy Grail at that time was the ability to cut thick plate steel. In the early 1990s, laser cutting was very much limited to about 12 o 15 mm (0.48 to 0.6 in.). That's when we started looking at ways in which we could assist the thickness capability of laser cutting materials. We were quite convinced that the gas played a significant role," said Gabzdyl. So we turned the basic principles of laser cutting on its head, and looked to our expertise in oxy-fuel cutting where we realised hat the oxygen is really the process workhorse," he said.

He continued: "In traditional laser beam cutting, the laser is the workhorse while the oxygen assists in the process.

The oxygen just helps. We inverted that philosophy in laser cutting and made the oxygen jet the workhorse and the laser beam the assist." The LASOX cutting process is an exothermic burning reaction in which the heat of the laser beam is only used to bring the steel to ignition temperature at approximately 1,832°F (1,000° C). A specially designed nozzle is used to deliver a supersonic stream of oxygen to the heated spot, resulting in ignition and then sustained burning. LASOX combines the benefits of lasers and oxyfuel cutting by using a very modest amount of laser energy by conventional standards, about lkW, so the process can be operated with relatively small low cost lasers. This laser beam in effect replaces the fuel gas in oxy-fuel cutting. The laser beam is then combined with a high pressure supersonic oxygen gas jet, which provides the cutting energy.

Thicker material has traditionally been cut with oxyfuel and more recently with plasma torches but both processes suffer from quality issues. "When we started in the early 1990s, we would have been happy to cut one-in. steel plate. But as it happens, we've been able to cut increasingly thicker plate. By careful manipulation of the nozzle geometry and the beam chara c t e r i s t i c s , we can cut very thick material - up to about four in.

Another advantage of LASOX is that it is instantaneous.

"There is no preheating element required to start the piercing process. In cutting two-in. steel with oxy-fuel, you ^ would need to put the flame on the surface for about 30 seconds before hitting the cutting oxygen jet to make the pierce. Whereas with the LASOX process, because the laser heats the surface instantaneously to the ignition temperature, as soon as you turn the laser on, you can turn on the gas stream and start piercing," explained Gabzdyl.

In January 2001, Gabzdyl and O'Neill were invited to present their findings on LASOX at a meeting at Caterpillar in Peoria, 111. "We turned everything on its head. We explained that the laser is not the important thing, it's actually the gas that does the trick. This astonished the laser community there, because they tend to be very laser-centric people who feel that the laser is always the most important thing," recalled Gabzdyl. "It definitely caught my eye," said Cahill, referring to the presentation. Later that evening, Gabzdyl, O'Neill, Cahill of Bender Shipbuilding and Penn of Alabama Lasers had discussions with the view to establishing this process in the shipbuilding industry.

In February 2001, Cahill pulled together the team of Bender Shipbuilding, Alabama Laser and BOC Gases, and wrote a proposal to the National Shipbuilding Research Program, (NSRP). "The proposal got selected and we moved forward. Less than a year after we started real work on it, we were using LASOX in production.

We went from the laboratory to production at almost lightning speed," said Cahill.

Penn, who serves as president of Alabama Laser agreed. "What we brought to the equation was taking LASOX out of the lab and making it work on the industrial floor. There's a big difference in doing something once in a lab and doing it a thousand times on the industrial floor," he said. "I've been working with lasers for 30 years and every now and then I see a quantum leap and LASOX fits into that category." Penn continued: "An important aspect of LASOX that isn't often mentioned is its ability to do intricate detail even on thick plate. We've been able to cut webs that just can't be achieved with other methods. The LASOX process supplies just enough heat to drive the reaction and a lot of that heat energy is removed through the kerf. Plasma cannot do the square cuts that allows you to do common line cutting with feature detail and a minimum heat for the part with a minimum amount of distortion, those features alone solve certain categories of problems. This is a tool to give you more capability, not a tool to displace other technologies. It gives someone that is going to invest a million dollars in a laser system with a new tool. It allows him to cut thicker plate without having to go out and buy a plasma or oxyfuel system and making a lot of redundancy and using up a lot more floor space." According to Pat Cahill of Bender, "LASOX is going to completely change the way people look at lasers as a cutting tool," said Cahill. "We're saving hours and hours of machine shop time because we're able to cut holes that are of machine quality. In the past we would cut the blanks out with an oxy-burner and take them to the machine shop and drill them." "LASOX has an almost zero kerf angle, an inch and a half material with less than one degree of a kerf angle. So you have a straight edge. It has almost no top edge melting at all." Turn to page 89 for updates on the latest Welding and Cutting Technologies 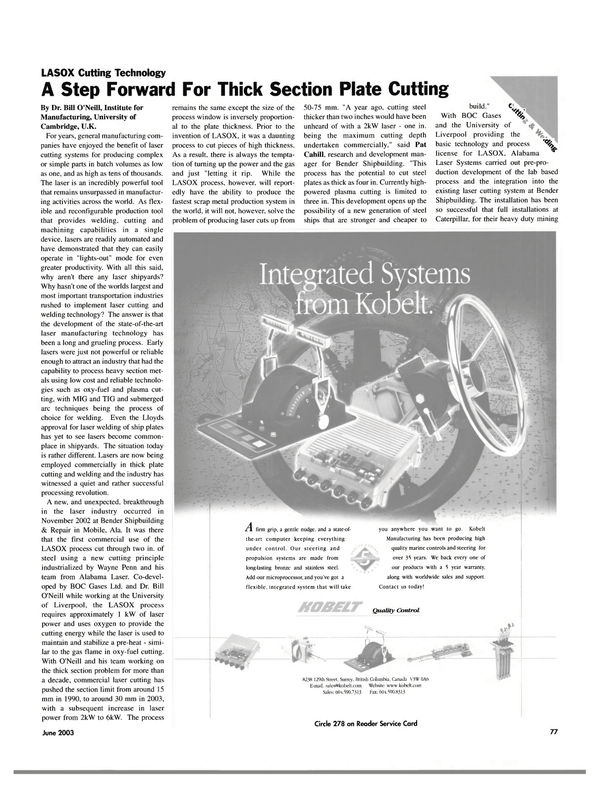