According to Greek legend, Zeus had the messenger god Mercury leave a mysterious box with Pandora. Mercury told Pandora to hold the box for safekeeping, but under no circumstances was she to open it. Not long after Mercury departed, curiosity got the better of Pandora and she opened the box to examine its contents. Unfortunately, the box contained all the ills and misfortunes of the world. They promptly escaped and have been loose in the world since that time.

The word 'panacea' is derived from the Greek terms "pan" (meaning all) and "akos" (meaning remedy). According to the Merriam-Webster Dictionary, the word means "a remedy for all ills or difficulties." The question is which term applies to AIS?

AIS is an electronic transceiver unit intended to be integrated with a ship's radar, gyrocompass, global positioning system (GPS), and other operational and navigational systems. When fully operational and when functioning properly, it will provide the officer in charge of the navigational watch with a radar display that includes a mark for every significant ship within radio range, each with a velocity vector indicating speed and heading. Each ship 'mark' could reflect the actual size of the ship and its position with GPS or differential GPS accuracy.

By clicking on a ship mark, the officer could learn the ship name, course, speed, classification, call sign, registration number and other information.

AIS operates in the VHF maritime radio band. It is capable of handling more than 4,500 reports / min., and updates itself as often as every two seconds.

Position and timing information is normally derived from a GPS receiver and generally includes a medium frequency differential GPS receiver. Other information broadcast by the AIS is obtained electronically from shipboard equipment through standard marine data connections. Heading information and course, and speed over ground would be provided by all AlS-equipped ships.

Other information, such as rate of turn, angle of heel, pitch and roll, destination, and ETA, could also be provided.

The AIS transponder works in an autonomous and continuous mode, regardless of whether the ship is on the high seas or in pilotage waters. System coverage range is similar to other VHF applications. Propagation is slightly better than that of radar due to the longer wavelength of AIS. Thus, it is possible to obtain an AIS report before the true radar image appears on the radar screen.

The shipboard AIS unit broadcasts the following information every two to 10 seconds while underway and every three minutes while at anchor: • The unit's maritime mobile identity (MMSI), a unique identifier for each ship radio unit, assigned by the International Telecommunications Union (ITU).

• The navigation status of the ship (e.g., underway using engine, at anchor, not under command).

• Type of ship and cargo.

• Dimensions of ship (in meters).

• Location on ship where the reference point for position reports is located.

• Destination of ship (at master's discretion).

• Estimated time of arrival (ETA) at destination (at master's discretion).

The U.S. Federal Communications Commission (FCC) has developed informal guidance regarding approval of AIS installations on U.S.-flag ships, but it has not yet promulgated its regulations. Likewise, the U.S.

Coast Guard has issued informal guidance describing the certification process for AIS and other navigation equipment mandated by the SOLAS Convention. Until those two agencies promulgate their regulations, AIS approval for U.S. ships will remain an ad hoc process. Type approvals have recently been issued, though, by the FCC and the Coast Guard for two commercial AIS systems.

Deadlines There are at least four separate sets of deadlines for use of AIS.

• For ships entering the St. Lawrence Seaway in North America, use of AIS was required as of the commencement of the 2003 navigation season, March 31, 2003. Portable AIS units are available for rent by ships not having AIS permanently installed.

• For ships transiting the Panama Canal, use of AIS will be required as of July 1, 2003. As with the St. Lawrence Seaway, portable AIS units will be available for rent by ships not having AIS permanently installed.

• For ships operating in U.S. waters, installation and use of AIS will be required in accordance with the following schedule: 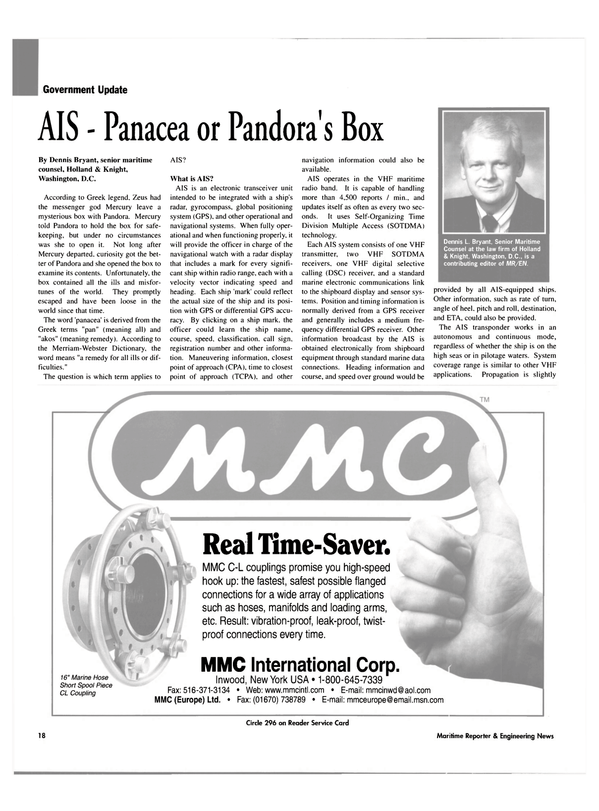