The possibility of a future regulatory regime in which newbuild bulk carriers over a certain size would need to be double- hulled has moved a step closer towards becoming a reality.

In March this year, the International Maritime Organization (IMO)'s subcommittee on ship design and equipment (DE46) started work drafting potential revisions to the SOLAS Convention. The DE initiative followed the agreement at the 76th session of IMO's Maritime Safety Committee (MSC76) that a regulation for double side skin construction should be considered for new bulkers of 492 ft. (150 m)- plus.

The task of drawing up the SOLAS revisions necessary for instituting double hulls, if this is indeed to become a mandatory requirement, is not scheduled to be concluded until the DE47 sub-committee meeting in 2004. Given the divergency of opinion within the industry on the safety arguments, practicalities and business implications of making double hulls obligatory, the industry therefore has more time in which to make its feelings known, and influence developments.

There is already a substantial fleet of double-hulled bulkers trading on the world's oceans, and new designs that promise long-term operational and maintenance benefits, and improved durability have been well received among shipowners and charterers. As recently demonstrated by a clutch of orders at Chinese shipyards, the case for investing in double side-skin configurations is all the stronger where construction can be obtained at a competitive cost. For sure, double side-skin designs eliminate exposed transverse framing and connections within the cargo spaces, protecting against mechanical damage and creating stiffer side structures.

However, a range of commercial and technical considerations still need to be addressed if the double-hull bulker is to be perceived in many areas of the bulk shipping and trading community as the favored way forward.

Class societies continue to bring major resources to bear in addressing the issue of bulk carrier safety. Through the body of the International Association of Classification Societies (IACS). the drive is on to find pragmatic, workable solutions behind which the industry can unite. It is to be hoped that the legislators pay very close heed to the sector's circumspect views on this matter and to its enormous technical know-how.

Bureau Veritas, for one, is set to pub- lish a set of guidelines for bulker construction, aimed at helping shipowners decide on structural configuration, and assisting companies in newbuild negotiations with yards.

Bernard Anne, managing director of the society's Marine Division, struck a chord with many in the industry when he said recently "We are concerned that, in the rush towards demanding double hulls for everything, our political leaders may have lost sight of practicality." "We all know that double hulls are not a panacea, and they have pros and cons," he observed, pointing out that "Singlehull bulkers can be just as robust, and there are many good, robust ships out there today with a useful life." "I would much rather see a single-hull ship built to high standards and then well maintained by a quality owner, than have a double-hull ship built down to shipyard minimums, then maintained at minimum levels." "We simply don't believe that you can design every problem out of a ship's structure, as maintenance will always be the key factor in how safe a ship is as it grows older." argued Bernard Anne, adding that "What makes the real differences between the strength of ships is much more often a matter of build quality and maintenance than a matter of design." 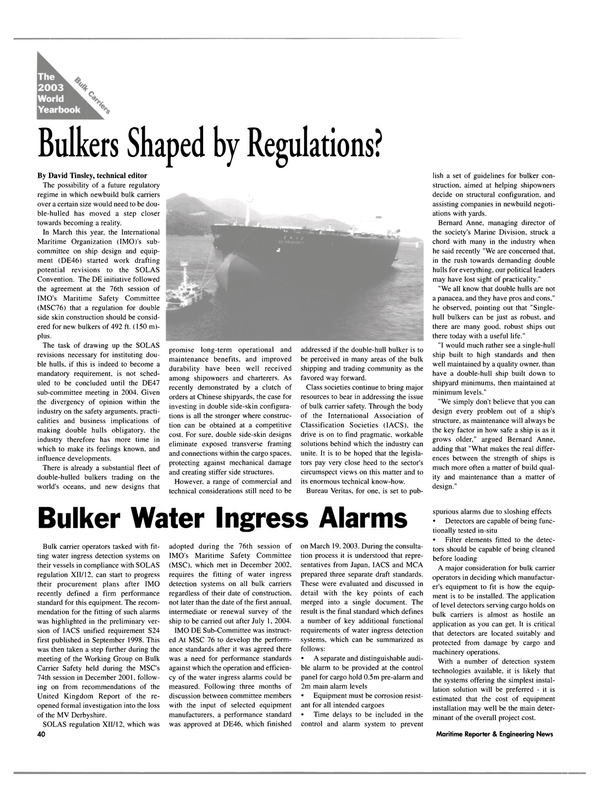