As the LNG trade significantly increase over the next decade, transporting the fuel in ever larger, more sophisticated ships means particular attention must be paid to technical issues to ensure the present and long-term viability of the new generation of larger LNG carriers.

Operators continue driving the demand for larger LNG ships to take advantage of the economies of scale.

"By increasing the size of the standard LNG carrier from about 145,000 to 200,000 cu. m. and even larger, it is estimated that there could be a reduction in transportation costs by as much as 15 percent," said James Gaughan. ABS Senior Consultant. Energy Project Development Group. Another advantage with larger LNG ship designs is a reduction in the amount of cargo boiled off as a percentage of volume. The expected boil-off rate for the larger designs will be no more than 13 percent versus the current range of 15 to 25 percent.

ABS has classed LNGs built with all types of accepted containment systems.

allowing it to extrapolate data from the previous generation of smaller LNG ships and apply it to designs now ranging upwards of 200.000 to 250.000 cu. 111.

Historically, over the last 10 years the increase in size of LNG carriers has been fairly gradual, observes Mumtaz Mahmood, Manager, Technology Development, ABS Europe. "The size increases being contemplated for the new breed of LNG carriers right now in the 200,000m3 to 250,000m3 range is significant. The entire design of the ship structure and containment system requires evaluation to ensure its adequacy to withstand the additional loads." Key Technical Issues The key technical issues that must be addressed with the larger LNG designs are: maneuverability, speed and power, cool down and loading and discharge rates, sloshing, ballast water exchange and visibility.

Maneuverability Current designs for the larger LNG ships in the range of 200,000 cu. m. are considering twin screw propulsion which would significantly improve maneuverability.

Since the vessels will be limited in draft to no more than 12 m to maintain operational flexibility, the beam of the vessels will be increased to as much as 55 m. These shallow draft, wide vessels need to be able to navigate in narrow channels for service to up-river terminals.

This requires enhanced maneuvering capabilities and special rudders and features such as larger bow thrusters and possibly stern thrusters.

Speed/Power Most LNG carriers have a design speed between 19.5 and 21 knots. It is expected that the new generation of large ships will be designed for the same speeds.

This, of course, will require an increase in propulsion horsepower and for vessels to be equipped with steam plant units significantly larger than those built before. This challenges the boiler turbine and gear manufacturers. The need to move to more efficient internal dual fuel combustion engines with diesel electric propulsion or a combination of one or more slow speed engines with a re-liquefaction plant is proven technology but has not yet been incorporated on a large LNG carrier in service. Given the expected future use of these systems, the issue of vibration associated with their operation must be examined to ensure that resonance frequencies are avoided during operations.

Cool down/loading rate/ discharge rate The cargo handling systems, which include cargo pumps, spray pumps, vaporizers, heaters, compressors and all the associated piping, must be sized and designed for the same performance characteristics as the systems on conventional LNG carriers in terms of discharge, loading and cool down rates.

Sloshing A key aspect of transporting LNG is designing the membrane-type tank and containment systems to withstand dynamic loads and sloshing of LNG cargo. The high pressures due to liquid surge inside the cargo tanks with the vessel in a seaway may damage cargo tank systems and internal tank structures unless adequately addressed at the design stage. ABS' 3-D sloshing software analyzes the deflections and stresses on membrane-type tank and containment systems. Membrane systems place the greatest stresses on the hull structure, particularly on the bulkheads and inner bottom.

i s i b i l i t y A simple yet practical point.

Increasing the length of the vessel and, in the case of the Moss spherical tank design increasing the height above the main deck with larger tank domes, requires a corresponding increase in the height of the navigation bridge. 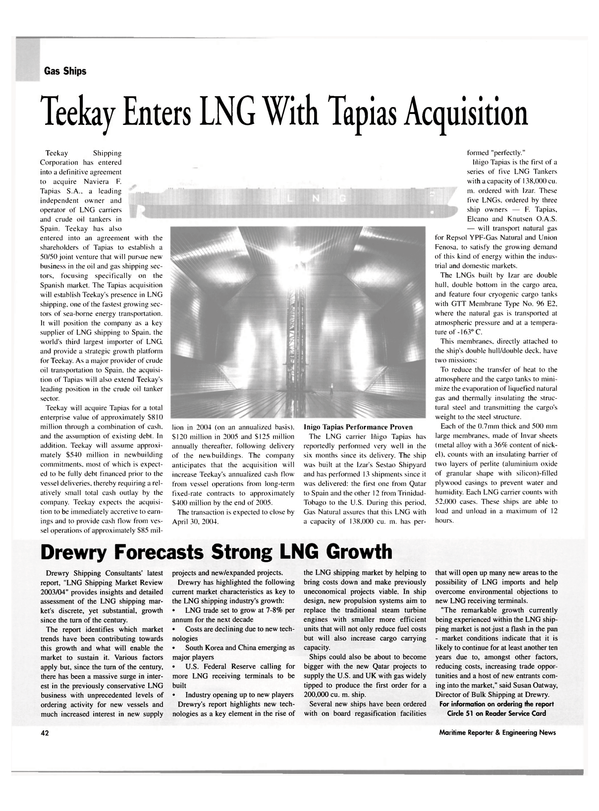