The Rules are About to Change

A seminal approach to class following the landmark decision by three of the classification societies two years ago to develop common edicts governing oil tanker hull structures, a complete draft set of new. unified rules is to be circulated for industry comment in June 2004. Drawn up by American Bureau of Shipping, Dct Norske Veritas, and Lloyds Register, the new rulebook is expected to be published next January, and to be brought to bear on all oil tankers of 150-m length and over ordered from July 1. 2005 onwards.

The rationale behind the project for a single set of rules governing tanker scantlings was to eliminate possible competition on structural requirements and standards.

The initiative grew out of the joint plan laid down by the three societies in March 2001, identifying 10 safety-related points where a unified approach would be developed and implemented. The central theme of the so-called 'ten commandments' was that classification bodies should not compete on standards, and should place more emphasis on ensuring consistency of approach, greater transparency.

and improving the overall quali- ty of the world fleet. The most technically complex element within the raft of measures was the decision to establish common basic criteria for ship design, regarding scantlings, loads and margins.

As an indication of the level of commitment and to a particularly challenging task, the societies have ploughed some $15-million since January 2002 into the project to secure harmonized tanker rule requirements.

At the outset, the focus was on the main scantlings only. However, according to LR's Vaughan Fomeroy, "It became evident very early in the project that the scope had to expand to cover the entire hull structure, including the local elements, if the end result was to satisfy the declared aim of developing a common set of scantling requirements for oil tankers that would put an end to competition, real or perceived, on steel weight between classification societies." A very significant aspect of the endeavor has been to satisfy the call from the industry for greater robustness in ship design and construction, arising front concerns over issues of safety and longevity, and with the aim of reducing problems for shipowners during the service life.

Presenting a paper*, jointly prepared by the three societies, to The Royal Institution of Naval Architects' 'Design and Operation of Double Hull Tankers' Conference in London, Pomeroy said that the relationship with other members of the International Association of Classification Societies (IACS) had been an important consideration throughout the project.

"Although conceived by ABS, DNV and LR independently from any discussions within the IACS, the existence of the project had stimulated debate," he said.

The IACS position now is that its 10 members will develop common rules for ship structures, and the international body has accepted the work by ABS.

DNV and LR on tankers as a pilot project in the development of IACS common structural rules.

Accordingly, the three have made the proposed new generation of rules and many of the working documents available to other societies for consideration in terms of possible adoption as common structural rules.

Cooperation at the IACS level is also expressed in the joint bulker project, which aims to develop common rules for double side-skin bulk carriers across the member societies.

The major portion of the rules will cover the prescriptive requirements, and include stipulations for global longitudinal strength as well as local requirements for the hull envelope, transverse and longitudinal bulkheads and other primary support members. The prescriptive rules will cover the entire ship, including the fore and aft ends, to ensure consistency throughout the structure. "The general rule format will provide greater transparency and ease of use than in typical class rules of today," observed Mr Pomeroy.

"The new Rule requirements will provide a ship structure that will be recognized by the marine industry as being at least as robust as would have been required by the current rules of ABS. DNV, and LR.

although in some aspects, the scantlings may be lighter than those required by one or more of the current rules, due to a redistribution of steel that will achieve a more efficient structure," he said. The assessment of design loads and capacity models will generally be based on a 'first principles' approach.

Minimum design fatigue life of the vessel will be 25 years, based on North Atlantic conditions. In addition, the fatigue assessment procedure in the envisioned new rules has been specifically developed to evaluate the design fatigue life of tanker structural details known from experience to be potentially vulnerable to fatigue damage. This will apply to appraisals of all longitudinal stiffener end connections in the cargo tanks and associated ballast spaces, and other critical details such as the hopper knuckle joint.

A major effort is now in progress to test and calibrate the new rule set, using a number of demonstrator vessels of various sizes. 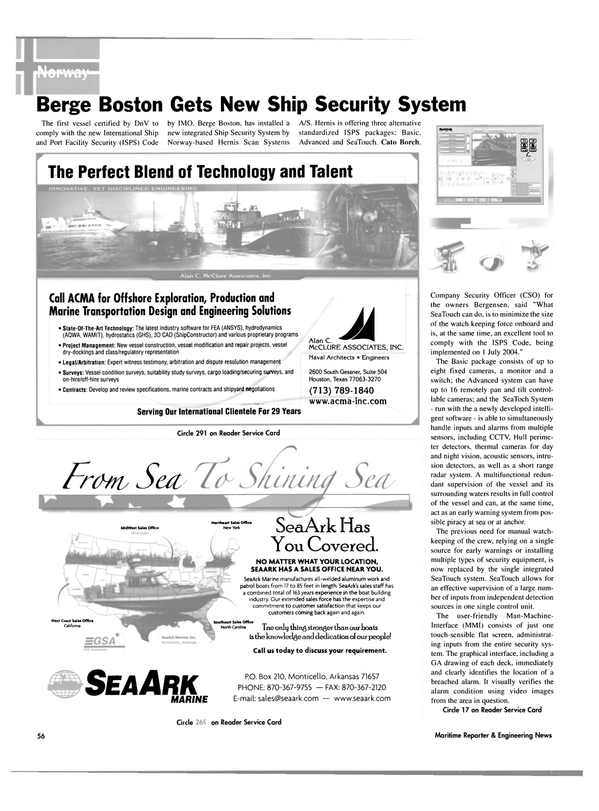 Read The Rules are About to Change in Pdf, Flash or Html5 edition of April 2004 Maritime Reporter