retrofit of a Bouchard Coastwise Management Co., tug and barge to an articulated (ATB) unit utilizing the Intercon Coupler System. The 446-ft., 125,000 BBL (barrel) black oil Barge B. No.175 which was renamed Barge B. No.275, was transformed from a single hull to double hull vessel to meet the requirements of OPA90. Her stern was modified with the matching Intercon ladder to accept the bow of the 127-ft. tug Capt. Fred Bouchard, which was retrofitted with ram assemblies of the Intercon system. New heating coils were added to the barge's existing hot oil system and a new ballast system was installed. A keel cooled Detroit Diesel 8V-71 generator set producing 99 kW was installed in the tug as back up for powering the Intercon hydraulic system and main generator. The tug and barge were both built in 1981.

"We are pleased to announce that we have successfully taken delivery of our third retrofit unit, the Capt. Fred Bouchard and the B. No. 21b," said Morton S. Bouchard III, president and CEO of Bouchard Transportation Company Inc.

"The Capt. Fred Bouchard is named after my grandfather and company founder. This brings Bouchard affiliates double hull fleet up to 11, with delivery of our 12th unit due out from Bollinger Gretna in several months. Bouchard affiliates have the largest double hull fleet in the country and are presently in the final study phase which will result in an announcement of another building program in the next few weeks." In simplest form, the patented Intercon system provides a single degree of freedom allowing the tug to pitch about a transverse connection between the tug and barge. All other motions are restrained so that the tug motions match barge motions in roll and heave. The connection is mechanical, accomplished with two independently mounted ram assemblies, gear driven, and configured for tug installation. The rams stroke transversely, engaging the vertical ladder structures incorporated onto both sidewalls of the stern notch.

The resulting connection is rigid, mechanically locked, and fail-safe. 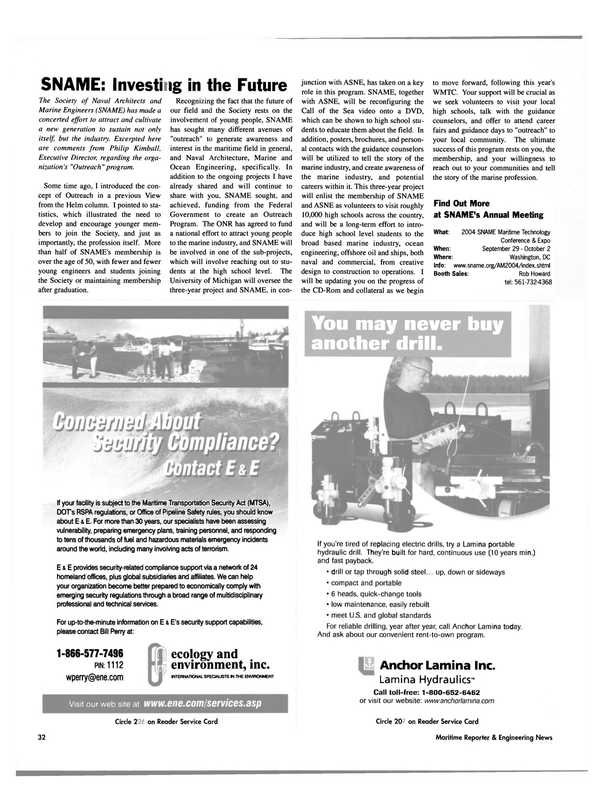