Wilh. Wilhelmsen ASA's intent is to transition from traditional shipping activities to be a leading international supplier of maritime transport and associated services. The company has a workforce in excess of 13.000 in 250 offices across 60 countries running a fleet of more than 200 ships. As the company transforms itself, though, it continues to be a leader in terms of fleet innovation and construction. WW's liner and car carrying business was up in 2003, with net operating income at S89.6 million, versus $78.2 million the year before. The company attributes this success to high utilization rates, a number of operational efficiencies, and a reduction in net financial expenses.

Global transport of new cars and other light vehicles increased by four percent in 2003.

WW joined forces in December 2002 with OW, Hyundai Motor Company and Kia Motors Corporation to establish EUKOR Car Carriers Inc, following the acquisition of Hyundai Merchant Marine's car carrying division. While results for the first year were lower than expected the trend for transported volumes was very positive. WW secured its position in the car carrier market with several newbuilding order. The group placed a contract during 2003 with MHI of Japan for the construction of four car carriers. The first of these vessels is due for delivery in October 2004. Each ship will cost about $50 million, and will be employed by WWL. The company recently activated an option for two additional ships. In January 2004, WW awarded a contract to Hyundai Heavy Industries for the construction of two car carriers with delivery in 2006-07. These vessels, which are rather simpler than the tonnage from Mitsubishi, will sail under long-term charters to EUKOR.

WW sold the Takamine car carrier in October 2003 to ARC for $40 million, which yielded an accounting loss of $1 million. The ship then changed to the American flag and is now part of ARC's fleet in the North Atlantic.

The conversion project for four RoRo carriers was completed in early 2003 as planned. A garage with substantial car capacity was installed on the container deck of each vessel. These ships are employed in WWL's round-the-world service. A similar conversion project began in January 2004 for five older RoRo ships belonging to Mark I K/S (owned 50 percent by WW). These vessels will also secure substantial additional car capacity. 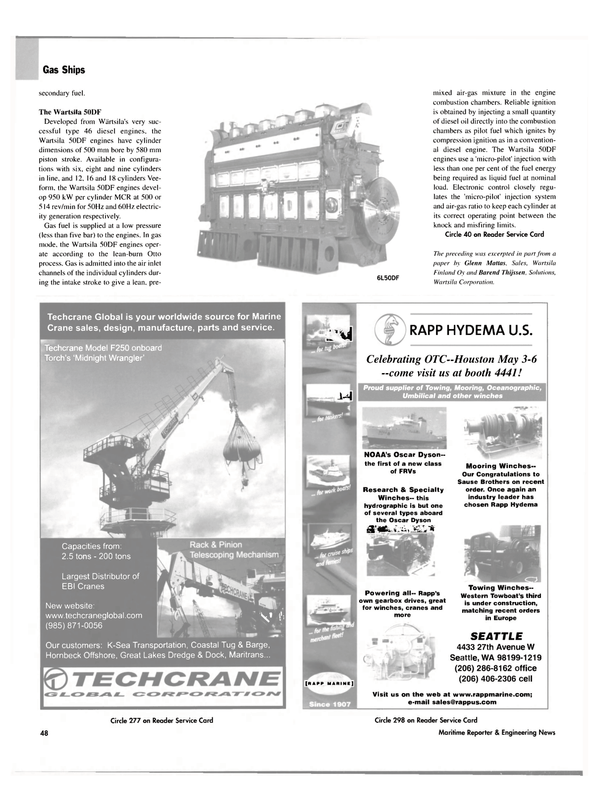