La., has added another new design to its list of "less is more" offshore service vessels (OSV) that have cargo carrying capacities of larger vessels without the added equipment, operational and maintenance costs to their owners or operators.

The design was developed in close cooperation with operator L & M Bo- Truc Rental Inc., of Golden Meadow, La., who signed contracts for two of the new OSVs.

The first hull was launched February 6, 2004 and delivery of the First boat, Cheramie Botruc 38 is planned for June 2004, with the second vessel, Cheramie Botruc 39. following in about three months thereafter.

ft. of aft deck space. Our new boat can carry 900 long tons on her deck that has almost 5,000 sq. ft. of clear deck cargo area." He added that the older GOM standards carried around 61,000 gallons of fuel oil while the new Bollinger design more than doubles that with a 125,000- gallon capacity. "That," he said, "gives the 191 more revenue time serving offshore installations and less time returning to base for fuel." In addition to being 191-ft. in length overall, the new boats will each have a beam of 46-ft. and a 15-ft. depth. Each will be powered by two Cummins KTA50-M2 diesel engines developing 1,600 bhp each at 1,800 rpm. They will drive Nibral propellers through Twin Disc MG 5600 reduction gears with a ratio of approximately 6:1. Eight other Cummins diesels will power two service generators, two generator drives, an emergency generator, bow thruster and pump systems. Accommodations for 18 will be provided in seven cabins. 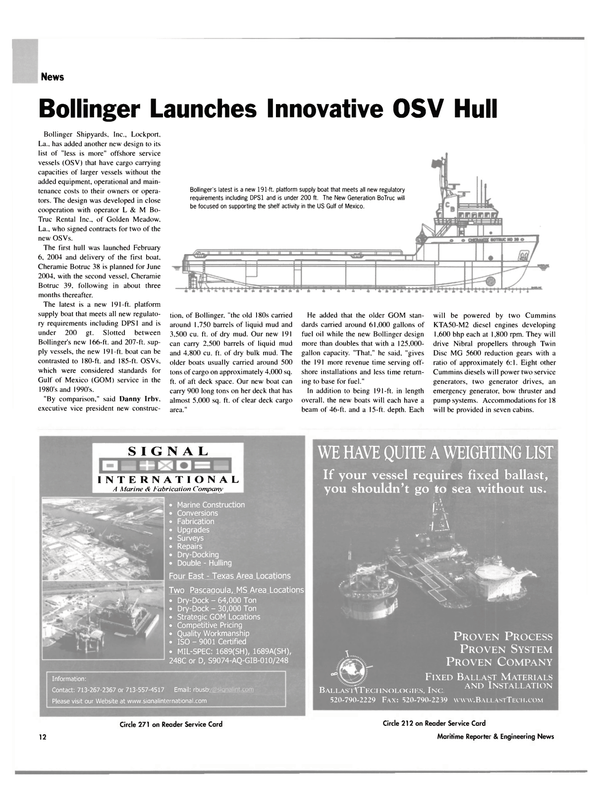