The Future is Now

The maritime industry has an image problem.

Perceived to be an aging industry, many players in the maritime niche deal daily with the very real problem of replenishing its employment ranks, from desk jobs designing and operating vessels, to those at sea and in the construction yards. While the problem is multi-faceted and without a clear solution, this article is not about problems. It's about hope and the future.

Traditional industries such as maritime are often lost to the youth, as higherprofile, more glamourous opportunities are found in computing and entertainment, for example. Simply put. many bright minds are lost before the battle has begun.

But for those who scratch beyond the surface will find an industry that is in the midst of a drastic transformation, as high technology — encompassing everything from computerized design and manufacturing, to enhanced performance of machinery, electronics and satellite communications — makes it a dynamic opportunity for a generation of young minds, young entrepreneurs that want the opportunity to leave an indelible mark on one of the most viable and critically important industries in the world.

Five of those young minds belong to V i c t o r DiSouza. Lou Detrisac, Scott Opdyke. Mike Rugnette and Katie Sultani. the five members of a team from the University of Michigan that won the International Student Offshore Design Competition (ISODC).

ISODC is an annual competition sponsored by the Society of Naval Architects and Marine Engineers (SNAME), the Ocean. Offshore and Arctic Engineering Division of the American Society of Mechanical Engineers (ASME) and the Coastal, Oceans. Ports, and Rivers Institute of the American Society of Civil Engineers (ASCE). The U of M team took home the highest honors last year with its ultra deepwater dual-activity Panamax entry Drillship Nereus. The entry was one of six projects submitted by students from universities around the world. Teams from Texas A&M University, the University of New Orleans and the Massachusetts Institute of Technology (MIT) were among the top contenders competing this year.

Professor Tom Lamb and faculty advisor to the six-person University of Michigan team, said. "The project provides a real design office experience for the final year capstone ship design course teams by requiring them to operate in an integrated concurrent design environment meeting real schedules and time constraints." Professor Lamb serves in the role of a design office manager for teams working on a variety of design projects. All of the team members worked together at the university. No direct assistance was provided by any company.

However, some of the team members received technical support from companies such as Shell and ExxonMobil where they had previously spent a short summer internship. According to Lamb, the team prepared a complete contract design requiring them to complete all naval architectural requirements such as lines development, hydrostatics, stability, resistance and propulsion, maneuvering, and seakeeping, general arrangement, machinery arrangement, structure, distributive systems, weight, loading conditions, vibrations, cost analysis, and cover the special requirements for the specific ship type.

The owners requirements were developed to challenge the students in the areas of drill depth, onboard oil storage capacity, ability to transit Panama Canal, design for production, and cost effective design. Maritime Reporter recently spent some time discussing the project with the winning team members, and their collective responses are printed below.

Q How was the decision made to select the vessel type?

A The idea of designing a drillship was driving by the opportunity to produce something unique in our undergraduate experience, which would have the potential to win both the International Student Offshore Design Competition (ISODC) as well as the Dr. James A. Lisnyk Ship Design Competition (SNAME). Two of the group members, Lou and Vic, had worked in the offshore industry the previous summer, which peaked our interest in that area. Then when looking at the offshore industry we had no knowledge of the exotic structures (DDCV's, TLP's etc.) so we considered both drillships and FPSO's. While doing our research we realized that some of the newer drillships had the ability to perform FPSO tasks, so we decided on a type of ship that was similar.

Q What do you feel is the most innovative/ unique aspect of your project?

A It would probably be the Panama Canal restriction. Most drillships with our oil carrying capacity have beams of 38-40 m while we were restricted to 32 m. The hull form was also very unique since it was based on a design for production strategy. It made modeling the vessel difficult and performing tasks like estimating resistance more challenging.

Also innovative is the ship's incredible capability. The intent of the design of Nereus is to meet or exceed the capabilities of every drillship in the world fleet. It does this through its capable drilling depth, large crude oil capacity, and versatile deck and propulsion machinery designs.

Q What were the biggest challenges you faced in finalizing your project?

A This varied throughout the group.

For Lou, it was trying to develop a reasonable station keeping analysis for a dynamically positioned vessel since nothing was available through the department. For Vic, it was developing a reasonable electrical load analysis and coordinating that with the powering analysis. For Scott, it was the structural arrangement, meeting DnV requirements while ensuring our design for production strategy. For Katie, it was making sure that all of the drawings were consistent with each other. A corollary to that would be to make sure that she was constantly working with the latest versions and that the drawing reflected the latest design changes. For the entire group we had to make sure that everyone was aware of changes that were occurring and how they would affect the rest of the group and vice versa while being confined to a four-month design schedule.

Q How were these challenges overcome?

A Lou ended up running a time domain mooring simulation, which was developed in the department, but it was decided that a mooring simulation was too different than a dynamically positioned system so we had to end up just using a static analysis as outlined in the DNV rules. Vic was able to obtain help from industry to put together a reasonable load analysis, which was then used to determine our powering estimates.

Scott developed a design tool, which would incorporate the DNV rules to our design and modify the design to meet the requirements. Katie worked methodically and kept everything organized. 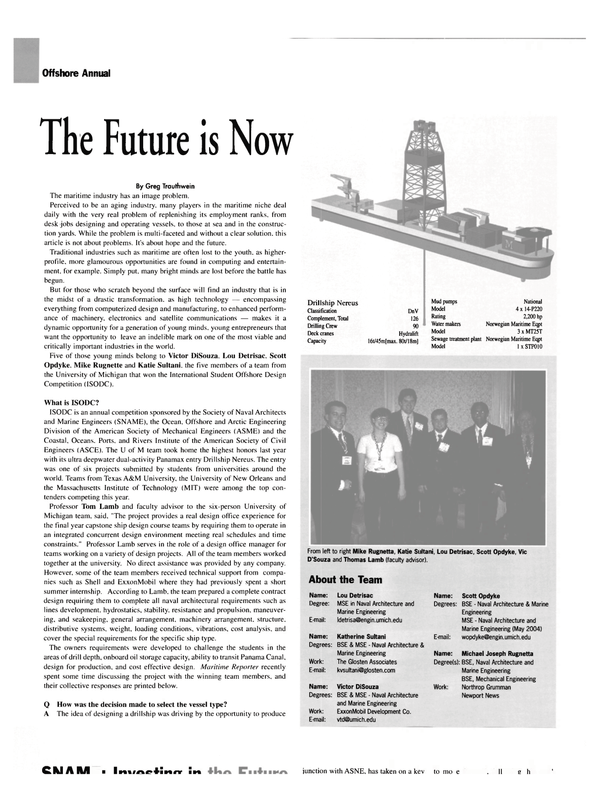 Read The Future is Now in Pdf, Flash or Html5 edition of April 2004 Maritime Reporter