Rig Demand in the Doldrums

U.S. Gulf of Mexico rig demand has fallen by eight rigs since December, but some indicators point to an increase in Gulf rig demand over the summer months. North Sea rig owners are facing a tough year, and more rigs are expected to leave the area. Other rig markets present a mixed outlook, with only West Africa likely to show a clear, sustained trend to increased rig demand over the next three to six months.

As of mid-March., oil and gas companies had filed 120 drilling plans with the Minerals Management Service (MMS), compared to 86 plans tiled over the same period last year. Well permits issued by the agency are lagging slightly behind the year-ago number, but that is likely to change over the next several months as operators act on the plans filed in the early part of the year. In addition to the MMS tilings, industry observers note that applications to drill are on the rise for work in Louisiana state waters as well.

The bulk of the plans filed year-to-date are for exploration programs. Only 38 plans have been tiled for development drilling programs so far this year. However, the most active companies have filed more development plans than exploration plans, as illustrated by the table below. The table to the right also highlights the fact that independent oil and gas companies are the most aggressive in the region. The table includes operators that have filed five or more drilling plans since the first of the year, as reported by the MMS.

More than half of the plans filed so far by U.S.

Gulf operators in 2004 are for drilling programs in 300-ft. (91 m) waters or less. These programs bode well for the Gulf jackup market, although this is not enough potential work to change the short-term nature of the U.S. Gulf jackup market. The deepwater rig market may slow down somewhat: Only 19 plans have been filed to-date this year for drilling programs in water depths exceeding 3,000 feet (914 m). More than a dozen rigs in the area may be competing for this work, as the bulk of the existing U.S. Gulf deepwater rig contracts end by December.

Latin America and the Caribbean Sea Mexico's Pemex continues its aggressive drilling program, and is likely to take additional rigs on contract. However, the magnitude of the potential increase in rigs contracted by the Mexican state operator remains unclear, as does the timing.

At present, Pemex has 41 rigs under contract, 10 of which are semisubmersibles. All but four of the contracts run into 2005 or beyond, so as long as nothing comes along to fundamentally change Pemex's outlook, the rigs currently under contract should enjoy a long run with the company.

Most of Pemex's contracts can be terminated with little or no notice, but the operator is not likely to exercise such an option absent some totally unforeseen event that negatively impacts its economic outlook.

Trinidad continues to provide work for rigs that otherwise might be idle in the U.S. Gulf. At present, six rigs are under contract off Trinidad, and all but one of these are under contract until well into the second half of the year or beyond. Trinidad's working rig count is expected to increase slightly as the year progresses.

Work in other countries of the region is likely to be sparse over the near term. Brazil in particular will continue to disappoint rig owners.

Five offshore rigs are stacked ready in Brazil, and another five reach the end of their known firm commitments by the end of the first half of the year.

While six to nine rig requirements ostensibly are outstanding for Brazilian programs, most will not start until late in the year or in 2005.

North Sea The good news is that this month North Sea rig demand posted its first month-to-month net The two-rig net increase can hardly be called a turn-around, however, and the outlook for the North Sea rig market remains fairly bleak.

Of the 55 rigs that have contracts in the North Sea, 20 will reach the end of their known firm commitments by midyear.

West A f r i ca West Africa recorded a net three-rig increase in rig demand from February to March, and this may foreshadow additional strengthening in the market later in the year. That is not to say that the competition for new work won't be keen. Of the 37 jackups, semis and drillships currently under contract in the region, 19 reach the end of their known firm commitments by mid-year. Ten of these are jackups. However, 42 known outstanding rig requirements are in the market at present, and while the bulk are for floating rigs as opposed to jackups, demand for bottom-supported units is expected to be fairly stable. A lot of the outstanding work for floaters in West Africa is for deepwater units, and a well in 10,000-foot (3,048 m) waters is definitely in a West African rig's future.

ChevronTexaco has an outstanding requirement in just such a water depth beginning this summer off Nigeria.

Asia and Australia The Asian and Australian rig markets continue to present challenges for rig owners. After four consecutive months of small increases in rig demand in the region, over the last month the market pulled back by a net two rigs in recent weeks. This type of cycle is likely to continue throughout the year.

Of the 53 rigs currently under contract in the region, 23 will reach the end of their known firm commitments by midyear.

However, many of the current contracts have options outstanding that could keep rigs working.

Malaysia and Indonesia will account for much of the new drilling work in the region in 2004. and Vietnam will contribute as well. In addition, a fair amount of floating rig work could materialize off Australia later in the year, including a half-dozen or so contracts that will require deepwater rigs. 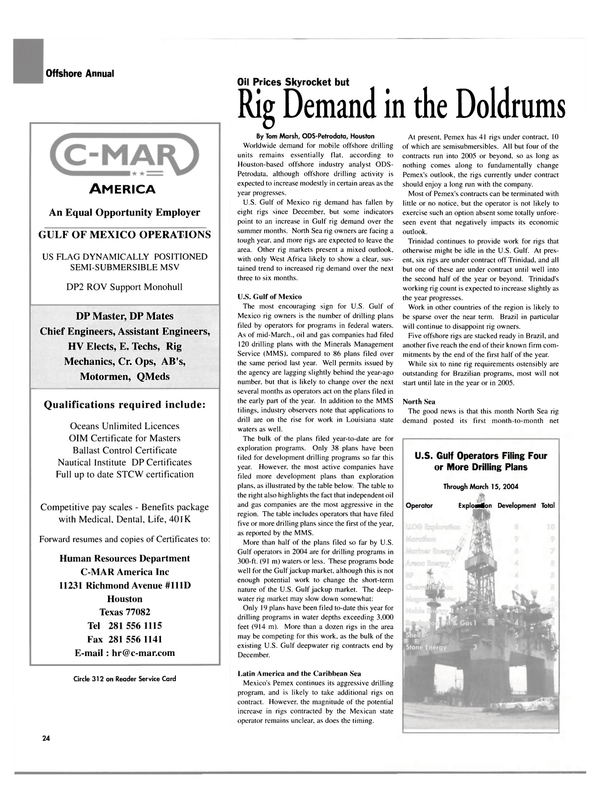 Read Rig Demand in the Doldrums in Pdf, Flash or Html5 edition of April 2004 Maritime Reporter