Farstad Shipping ASA is an Aalesund, Norway-based company that operates a fleet of 49 supply-vessels, AHTSs and PSVs. In December Farstad received two new PSVs from Ulstein Verft AS.

Immediately after delivery Far Symphony took over a contract for Norsk Hydro from Far Scandia. Far Scandia left the North Sea in December to start a long-term contract for Esso in Australia. Far Splendour has started a five-year contract for Peterson Supplylink in Holland.

Farstad Shipping has through its Joint Venture (BOS) in Brazil, three AHTS under construction at Brazilian yards for delivery in 2004/2005. These vessels have all got long-term contracts to Petrobras.

The demand for supply vessels in the North Sea has decreased during the fourth quarter and the number of vessels on long-term contracts was by the end of the year down to 122. The spot market has varied between 27 vessels and 39 vessels, and has resulted in a total demand for vessels in the fourth quarter of I6l vessels on average. The average for the year was 179 vessels. The supply side in the North Sea has seen a continuing departure of vessels and even though a number of new vessels were delivered from yards in the North Sea area during this quarter, the fleet still ended at 182 vessels. The average utilization ratio was as low as 86 percent, resulting in a low rate level during the quarter. The prospects for the North Sea are uncertain for the rest of the year. If the rate level is to recover, the activity has to increase and the fleet will have to be reduced.

In Australia/the Far East the level of activity has remained good, but the supply side is increasing and the rates are coming under pressure. In addition there is now a temporary lower activity level due to the monsoon season in the Southeast Asia during the first quarter.

The activity in the Mediterranean and West Africa is increasing, but a large part of the departure of vessels from the North Sea has been to these areas, and it is uncertain how much the fleet in these areas can increase in the time to come.

However, a larger part of the world's fleet is more than 20 years old, so a renewal will be required. This together with an expected increase in activity on a world basis and a reduced activity in new building, give expectation of a balance between supply and demand during the year. 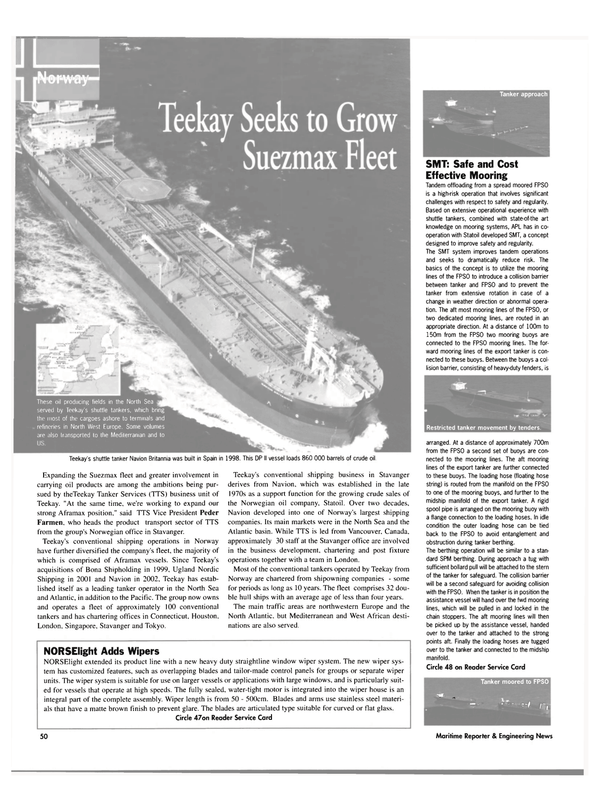