The Ocean Class Auxiliary General Oceanographic Research (AGOR) vessel hull number 27 started its official life as the R/V Neil Armstrong, the first research vessel named after a space explorer.  The ship was designed by Guido Perla and Associates and built at Dakota Creek Industries (DCI). R/V Neil Armstrong will replace the R/V Knorr, in service since 1968, one year before Armstrong’s walk on the moon.  The R/V Knorr, AGOR-15, is retiring after logging over one million miles in service to the Navy and WHOI. Initial vessel construction for the two-ship, $145-million-dollar project is funded by NAVSEA who will retain ownership of the vessel.  Scientists from WHOI and around the world will be the primary users conducting year-round research in the North Atlantic and Arctic Oceans.  WHOI will contribute $350,000 a year for maintenance and operation of the vessel.  Research will include mapping of the seafloor, launching of buoys, ROVs and other equipment, studying how currents affect acoustic signatures, microbial content of the northern waters, discovering how climate change and sea level rise are impacting the North Atlantic, and how the ocean in turn impacts climate changes.  The focus will be on the entire eco-system.  The physics, biology and chemistry of the high latitude oceans will fall within the Neil Armstrong’s mission area.
The ships are 238 ft. in length overall, have a sustained speed of 12 knots and travel over 11,000 nautical miles without refueling.  In addition, they have the most modern scientific laboratory facilities and workshops afloat, high-tech computer and oceanographic equipment, and hotel facilities to support 24 scientists and a crew of 20.    They are built to ABS Under 90 Meter rules, and will be certified as A1, Circle E, AMS, ACCU, NIBS, Ice Class D0, and UWILD.  The design is also compliant with 46CFR Subchapter U (Oceanographic Vessels).
Working deck space is a premium in oceanographic work.  The AGOR vessels have 2,557 sq. ft. of clear deck space with 1,873 sq ft of that space on the open aft deck.  Design specifications included being fully operational in Sea State 4 and able to handle dynamic positioning relative to a fixed position in Sea State 5 with a 35-knot wind and 2-knot current.
Additionally, the ship had to be as operationally quiet as possible.  A great deal of ocean research involves listening.  Excessive ship noise would negate that effort.  GPA’s unique hull design meets the Bubble Sweepdown performance requirement of the original specifications by diverting bubbles away from the sensitive sonar area.  Model tank tests performed in Poland confirmed the Phase 1 design efforts met the Navy’s exacting standards.   Completing the noise dampening goal, designers chose systems, defined equipment locations, and designed special installation methods with acoustics as a priority.
Siemens installed its new Blue system, an advanced, multi-drive, low-voltage system manages the speed of various AC propulsion motors controlling the propellers, stern thruster and bow thruster.  The system provides enhanced reliability with multiple failsafe features, lower maintenance costs, increased efficiency, and increased operational ease for the crew.  Reduced fuel consumption results in lower greenhouse gas emissions.  Siemens is also supplying the majority of the electrical switchgear, the ACCU automation, and condition-based monitoring system. The vessel uses four vibration-isolated Cummins QSK38-DM main generators providing a maximum of 3952 kW integrated electric power for all functions of the ship, including propulsion.  The integrated diesel-electric plant allows for multiple generator configurations, ensuring the diesel engines operate at peak efficiency at all times.
A unique feature of the electric propulsion will be a “combinator” style control function integrating management of motor speed and propeller pitch on the Hundested-supplied Controllable Pitch Propellers.  Although fairly common in controllable pitch systems with direct drive diesels, use of the combinator control is unusual in variable-speed electric drive systems.  The combinator increases operational flexibility by allowing the operator to set the propeller at its most efficient setting across a range of operations including heavy towing and cruising.Design specifications were stringent for deck cranes and winches.  They needed the capacity to load equipment weighing more than 20,000 pounds including the deployment of ROVs, buoys and other heavy equipment.  The stern frame required a minimum of 12-foot inboard and outboard reach.  As designed, the frame  provides 15 feet of clearance above the deck and 27 feet of clear space between the block attachment points, all while maintaining a Dynamic Safe Working Load of 30,000 pounds through the full range of motion.  Allied Marine supplied the stern frame along with the portable TK4-30 portable crane and the TK 70-70 aft-deck Main Crane.  It also supplied the Motion Compensated CTD Handling System and the Starboard Side Handling Device, both of which extend to the waterline for improved safety and load control.
Markey Machinery supplied two electric-motor driven CAST-6-125 Hydrographic Winches, and the DETW-9-11 Traction Winch, both with AC Variable Frequency Drives System and electric motors for precise control. 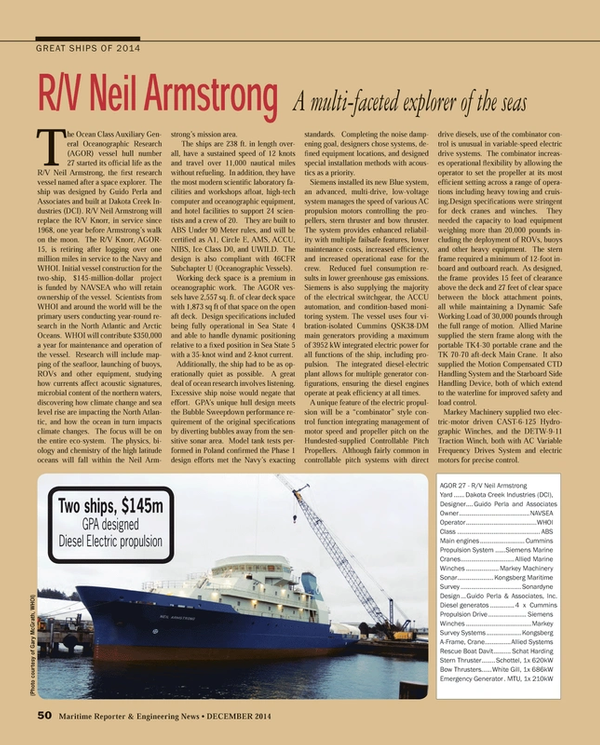