As Interest in LNG Surges, Regulators Struggle to Keep Pace

The use of Liquefied Natural Gas (LNG) as a transportation fuel for ships, barges and ferries has surged in recent months.  This surge is due, in large part, to the boon in the production of natural gas in the U.S.; new low sulfur rules for the North American Emission Control Area (ECA), which go into effect on January 1, 2015; and new technologies for the construction of engines capable of running on LNG.  Regulatory regimes both in the U.S. and worldwide are struggling to keep pace with the tremendous growth of LNG as a fuel.

Background & News
In the past two months, under the leadership of its new Administrator, Paul “Chip” Jaenichen, the Maritime Administration (MARAD) has taken two major steps to encourage the use of LNG as a transportation and bunkering fuel.
The first major step was the approval of a $324.6 million loan guarantee under the Title XI program to TOTE Shipholdings to finance the construction of two new containerships that will use LNG as propulsion fuel.  These ships are being built at the General Dynamics-NASSCO shipyard in San Diego, CA.  According to MARAD, the construction of the new ships will generate 600 jobs at NASSCO and suppliers around the U.S.  Once built, the ships will be placed in the Jones Act trade and carry freight between Jacksonville, FL, and Puerto Rico.
MARAD touts that the TOTE ships “will be the most environmentally friendly containerships in the world” because the “new engines will reduce particulate emissions to levels well below EPA mandates.”  (DoT Fast Lane blog, September 23, 2014).  Designed by DSEC, a subsidiary of South Korea-based Daewoo Shipbuilding, the ships include DSEC’s patented LNG fuel-gas supply system and a MAN ME-GI dual-fuel slow-speed engine.  Notably, NASSCO also has a contract with American Petroleum Tankers to build four new product carriers that will be ready for conversion to use LNG fuel.  Crowley is also building two new LNG-powered containerships at VT Halter Marine—also for the Jones Act trade.
Second, MarAd released an LNG Bunkering Study prepared by DNV-GL.  (Report No. PP087423-4, September 3, 2014).  This comprehensive study addresses the current regulatory environment for the use of LNG and identifies the regulatory gaps that need to be filled in order to support a bunkering infrastructure in the U.S.  The study concludes that “LNG is an attractive fuel choice for many vessels because it exceeds the air quality standards set forth in the ECA, and the price of LNG is significantly lower than ECA-compliant fuel.”  The DNV-GL report also noted, however, that significant safety and regulatory gaps exist because the use of LNG as a marine propulsion fuel is a relatively new concept in the U.S.  Among the key regulatory gaps DNV-GL identified are the lack of a set of comprehensive federal and state regulations for bunkering and associated infrastructure, and proper training for crew and operators.

Subsidy Programs for LNG
The DNV-GL report also revealed that the U.S. regulatory regime falls short of the regimes already in place in the EU.  For example, Norway already has five LNG bunkering installations in operation and has created a private investment fund where ship owners could receive 50% subsidies for using “green technologies.”  (DNV-GL study at 24).
The European Commission, with heavy support from the European Maritime Safety Agency, is developing a comprehensive set of rules, standards and guidelines for LNG provision, bunkering, and use in shipping.  (European Maritime Safety Agency, available at http://www.emsa.europa.eu.)
The International Maritime Organization (IMO) also has made progress amending the draft “International Code of Safety for Ships using Gases or other Low Flashpoint Fuels;” however, its “Interim Guidelines on Safety for Natural Gas-Fuelled Engine Installations in Ships” have remained in “interim” status for more than five years.  (Resolution MSC.285(86)).

Plan for Catching Up with Europe
To ensure the full potential of LNG as a marine fuel worldwide, the maritime industry needs both executive and congressional action in the U.S.
The U.S. cannot make strides in LNG regulation without Congress playing a significant role. The House Transportation and Infrastructure Committee and the Senate Commerce, Science and Transportation Committee should take the lead on developing legislation to fill the regulatory and policy gaps discussed above.  Such legislation should include a one-stop permitting model for infrastructure development similar to the one used in the Ocean Thermal Energy Conversion Act of 1980 (Pub. L. 96-320).  It also should confirm that LNG can be used as a fuel that complies with current and future EPA and ECA standards.
To avoid the political pitfalls of ballast water legislation, which has been mired down in endless Congressional debate over preemption, the legislation should set national guidelines that state and local governments can use as guidance but does not create a patchwork quilt of state and local laws and regulations with varying standards.
The U.S. needs to designate a lead agency to develop the policy and the regulatory structure for the use of LNG as a transportation fuel.  One option is MARAD with the assistance of the Coast Guard, EPA and the Army Corps of Engineers.  The DNV-GL study, above, describes the patchwork of agencies in charge of various aspects of this problem—too many to lead to an efficient result.
Once designated, the lead agency should convene a workshop with industry, NGOs and key regulatory agencies to debate the policy and regulatory gaps, and identify the need for financial incentives to promote LNG as a clean transportation fuel.
The lead agency, with other interested agencies, must promptly address at least three key issues:  crew and operator safety, financial assistance programs and the Marine Highway Program.
To address issues of crew and operator safety, the U.S. Department of Labor, working closely with the U.S. Coast Guard and respective maritime unions and schools, should administer programs to increase safety.
Agencies must also consider financial assistance programs to incentivize the construction of new ships, ship engine conversions and new portside bunkering infrastructure.  The following federal grant and assistance programs could be utilized:  the Environmental Protection Agency’s Diesel Emissions Reduction Act (DERA) Program; the Department of Transportation’s (DOT)  Transportation Investment Generating Economic Recovery (TIGER) infrastructure grant program; port security grants at the Federal Emergency Management Agency (FEMA), a part of the Department of Homeland Security (DHS); Small Shipyard Grants at MARAD/DOT; the Capital Construction Fund (CCF), which is implemented by MARAD and the Internal Revenue Service; and MARAD’s title XI loan guarantee program, which assisted in the financing of the TOTE containerships, above.
The Marine Highway Program (MHP) is also essential for strengthening the U.S. port bunkering infrastructure.  This program, initiated by MARAD, has not had much Congressional support, but will be useful for designating ports that can handle infrastructure for bunkering operations.  To make MHP a reality, MARAD and other agencies should explore the use of private investment and public-private partnerships for developing and funding infrastructure projects, similar to those authorized by the Water Resources and Reform Development Act of 2014. (Pub. L. 113-121).
Unless there is legislative action to create a legal framework for LNG to thrive, and executive action to designate a lead agency to consolidate layers of regulation, the growth of LNG as a marine fuel may not reach its potential.


Conclusions
The U.S. has taken the first steps to promote LNG as a clean maritime transportation fuel, but Congress and the Administration must now develop a well-coordinated LNG policy and regulatory regime and a package of needed financial incentives and training programs to foster an environment in which LNG can continue to safely take off as a marine fuel.

* Joan Bondareff would like to thank Stefanos Roulakis, an associate in the Firm’s maritime, international trade, and government contracts group, for his assistance in writing this article. 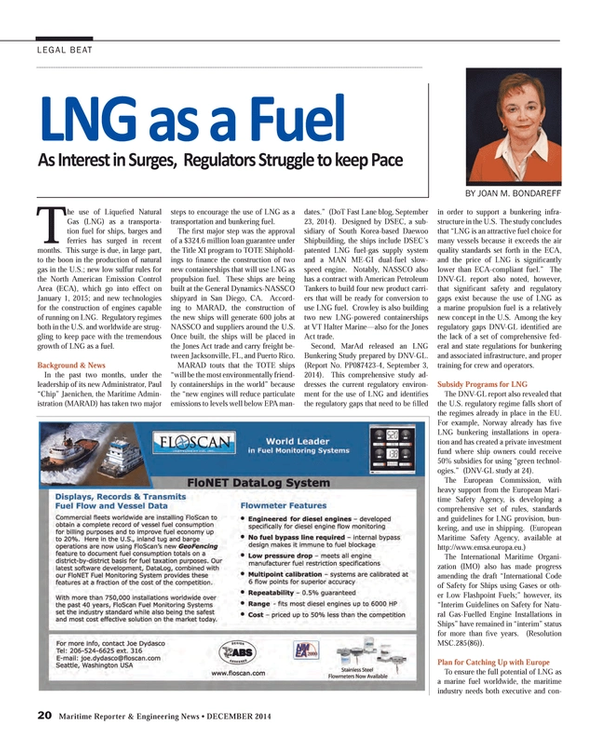