“A fundamental and sustainable dry bulk market recovery is expected in the second half of 2015 and throughout 2016, when the total dry bulk market balance could peak at 88%, with peaks during the fourth quarter close to 92%. Improved tonnage balance in 2015/2016 should drive up bulk rates.”
Harald Lone, Group Chairman, Newport Shipping Group

The supply/demand imbalance that drove dry bulk markets down to 2009 levels during the first half of the year is set for adjustment, with Newport Shipping Group predicting an improved tonnage balance over the next couple of years, resulting in a freight rate peak in the 2016/2017 period.
“The dry bulk markets during the first half of 2014, especially Panamax, Supramax and Handysize, have not been at these low levels since the financial crisis in early 2009,” said Harald Lone, Chairman of Newport Shipping Group. “Strong supply growth combined with a decline in most of the major coal trades pushed spot earnings for Panamaxes to just above $3,000 per day in Q1 2014, well below operating costs. The markets are still soft, with average spot earnings in 2014 down by 10% on 2013, with Panamax rates down as much as 22%.”
“A fundamental and sustainable dry bulk market recovery is expected in the second half of 2015 and throughout 2016, when the total dry bulk market balance could peak at 88%, with peaks during the fourth quarter close to 92%,” Lone said. “Improved tonnage balance in 2015/2016 should drive up bulk freight rates.”
Referring to Newport Shipping Group’s latest Dry Bulk Market Outlook report, Lone said that less ordering combined with an increase in scrapping is expected to result in a significant shift in the pace of fleet expansion as scrapping eats into new deliveries.

Dry Bulk Scrapping
Scrapping could eat further into the supply/demand balance, given that 28% of all vessels in the Handy segment, the main contender for demolition, will be 20  years old or more by 2017. Deliveries of new Handy vessels between 2015 and 2016 period will add 13 Mdwt per quarter to the fleet, of which 80-90% will be in the larger 30-40,000 dwt segment.

Dry Bulk Drivers
Key drivers remain the steel industry and Chinese imports of iron ore and steam coal. Iron ore imports to China are expected to increase from the 824 mt registered in 2013 to 1,080 mt in 2016, which correlates to an annual growth rate of about 9.5%. This, supported by increases in iron ore to the EU, Japan and other parts of Asia, is forecast to result in an 8% increase in the seaborne trade of iron ore during the 2013-2016 period, of which 89% will be imports to China, mainly from Australia and Brazil.
Besides iron ore, steam coal imports to China will be drive future dry bulk demand. However, this year global trade was down by almost 40 mt and Chinese imports were more than 100 mt shy of projections due to falling coal prices, low demand and increased hydro power production – fundamentals that are attributed to the first half weakness of the Panamax, Supramax and Handysize segments. 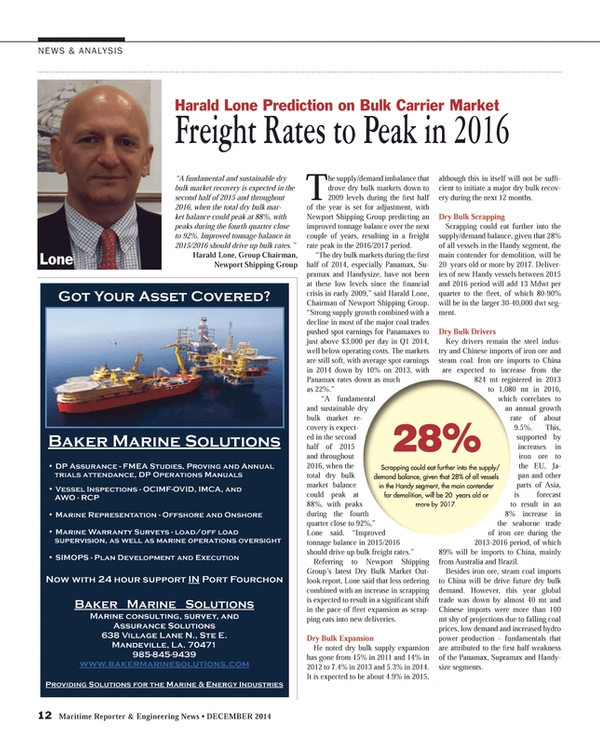