August 20, 2014 marked the first anniversary of the entry into force of the Maritime Labor Convention (MLC, 2006). During these first 12 months 113 ships were detained by one of the Paris MoU Authorities for MLC-related deficiencies. This represents 17.4% of the total number of detentions (649) in the Paris MoU during this period. During the first year 7.4% (3,447) of the total number of 46,798 deficiencies recorded was linked to the MLC, while 160 (4.6%) were marked as a ground for detention resulting in 113 detained ships. Detainable deficiencies were most frequently recorded in the areas “payment of wages” (39,5%), and “manning levels for the ship” (28.6%). Other areas with high deficiency levels are “health and safety and accident prevention” (43.1%), “food and catering” (15.4%) and “accommodation” (10%).
Only the member States of the Paris MoU which have ratified the MLC on or before August 20, 2012 were entitled to conduct PSC inspections on MLC requirements from August 20, 2013. As a result the following 12 member States started enforcing the MLC, 2006 from August 20, 2013: Bulgaria, Canada, Croatia, Cyprus, Denmark, Latvia, the Netherlands, Norway, Poland, the Russian Federation, Spain and Sweden.
During the first year of implementation, the following member States began to enforce MLC, 2006: Belgium, Finland, France, Germany, Greece, Italy, Lithuania, Malta and the United Kingdom, bringing the total to 21. 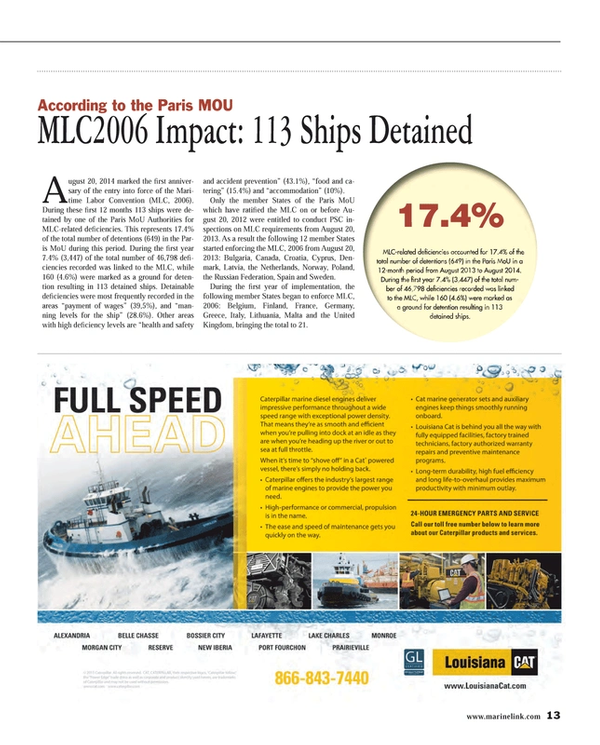