The first of three bulk carriers was delivered to Archer Daniels Midland Company (ADM), unique in that the ship features a host of innovative technologies, including the Mitsubishi Air Lubrication System (MALS), which reportedly helps the ship to achieve a 27% reduction in CO2 emissions as compared to conventional bulk carriers of the same capacity. Developed by Mitsubishi Heavy Industries, Ltd. (MHI) and built at Oshima Shipbuilding Co., Ltd. of Nagasaki, an MHI licensing partner, the centerpiece of the new ship is the incorporation of MHI’s proprietary Mitsubishi Air Lubrication System (MALS), which is designed to reduce frictional resistance between the vessel hull and seawater using air bubbles produced at the vessel bottom. The new ship series was ordered by ADM in 2011, and  delivery of the three vessels is scheduled for completion by mid-2015. The carriers are 777.5 ft. (237 m) in length, 131.2 ft. (40m) wide with a 41 ft. (12.5m) design draft and a deadweight tonnage (DWT) of  approximately 95,000 tons. In addition to the MALS system, the new vessel features a new bow shape designed to reduce wave-making resistance. 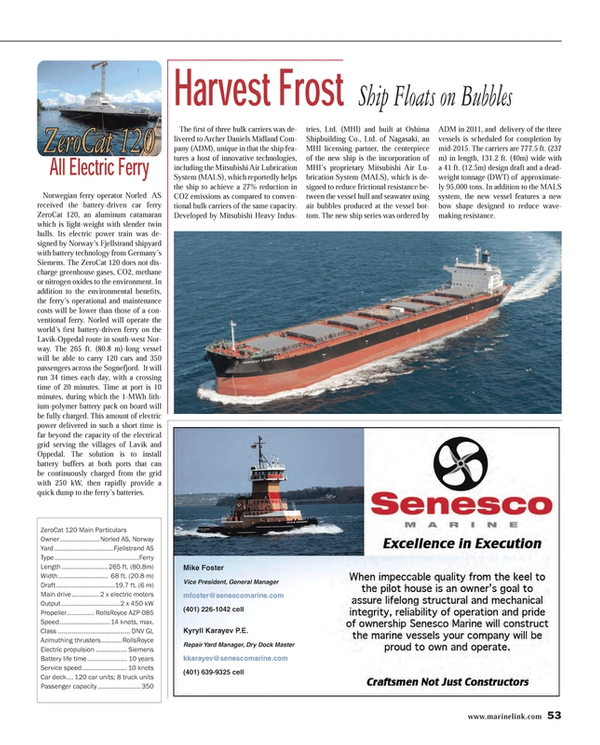