Great Ships of 2014: Top Coral Do Atlantico - A 'Mega' Pipelayer

TOP Coral do Atlantico is the first of two, characterized by a high ppelay tension capacity of 550 tons and a storage capacity of 4,000 tons, designed to install umbilical and flexible flowlines and risers to connect subsea wells to floating production units in water up to more than 2,500m deep off the coast of Brazil, including the pre-salt area. A long-term charter agreement has already been made with Petrobras.
To support subsea installation work, a 250 ton-capacity deck crane was equipped with AHC (active heave compensation). AHC function recognizes the vessel’s motion and provides stable subsea lifts and underwater load handling in water up to 3000m in depth so that the underwater installation work is less affected by wave and weather conditions. In terms of stability during offshore work, in order to meet the need for efficient flexible pipe laying operations, an anti-heeling & anti-rolling system was also installed. Such a system will make it possible to perform elaborate stability control to cope with various operational situations.  The vessel is a DP2-classed vessel and can be dynamically positioned using seven thrusters, which are composed of three kinds: three azimuth propulsion thrusters, two retractable thrusters, and two tunnel thrusters. 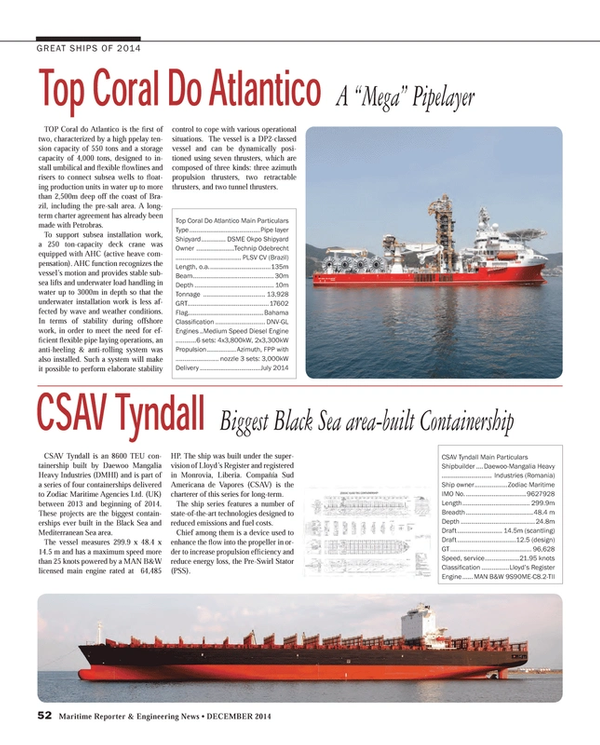