The ISV Siem Moxie, an Ulstein SX 163 design not only has been deemed a “Great Ship” in our pages, it has also been awarded the “Offshore Renewables Awards 2014” and the “Innovation Awards” by an international panel.  The Siem Moxie measures 242 x 55.7 ft. (74 x 17 m). It is the very first X-Bow support vessel which features two sets of Voith Schneider Propellers. Both the Voith Schneider Propellers are also used for its active roll stabilization system and dynamic positioning (DP-class 2). Its design drew on a wealth of experience within the offshore business. Its specific role will be to support work crews to the platforms and foundations in order to prepare for the submarine cable pull-in and terminations. In addition the vessel can also be used to support the erection and maintenance of the wind turbines, which are typically installed once the installation of submarine cables has been completed. The Siem Moxie’s low fuel consumption makes it particularly environmentally friendly. The vessel’s key features are a 3D motion-compensated knuckle boom crane and an active motion compensated personnel transfer gangway, permitting the safe transfer of work crews. Thanks to the ship’s active roll stabilization capabilities, offshore works can continue even in challenging sea and wind conditions. “We chose the Siem Moxie because it will make our installation operations extremely safe and efficient,” Sven Utermöhlen explains. “In addition it will help make the construction of offshore wind farms more cost-effective, thereby helping this technology move closer to market maturity.” The SIEM MOXIE is deployed on E.ON’s Amrumbank West offshore wind farm project by Siem Offshore Contractors for the installation of the inner array grid submarine cable system. It is the vessel’s first area of operation. Amrumbank West is an offshore wind farm located north of Helgoland in the North Sea, which E.ON has been building since January 2014. Amrumbank West will extend over 32 square kilometres. Its 80 technologically advanced 3.6 megawatt wind turbines will give it a total capacity of 288 megawatts, enough to power up to 300,000 households. 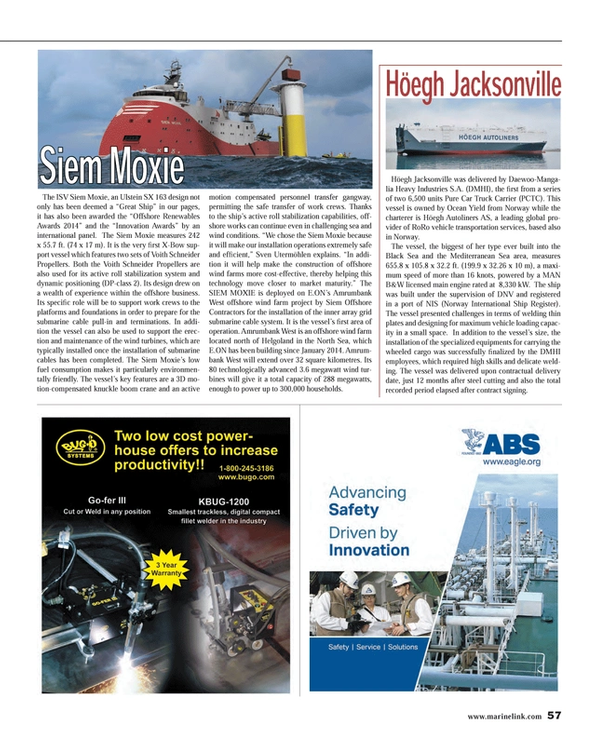