Millions of tons of waste reach the oceans each year, causing the sea to become the planet’s largest garbage depot, as inadequate or nonexistent waste management systems – particularly in coastal and island communities – enable massive patches of marine debris to form around the globe.
In an effort to end this process ashore and in the seas, German entrepreneur and shipbuilder Dirk Lindeau, backed by a group of German specialists and funded by the German federal foundation of environment DBU, has produced a Waste-Recycling-Ship (WRS) concept that aims to provide an efficient, economical and sustainable waste management solution for islands as well as large coastal and river cities.
The team intends to implement German waste recycling technologies aboard ships converted at a Kiel, Germany, shipyard to collect, process and recycle waste on board in a safe, economical and environmentally friendly manner.
According to Lindeau, it is often not possible to install modern waste treatment plants on islands and coast areas for a number of economical, geographical or logistical reasons. A feasibility study on the Maldives Islands promoted by DBU found that the goals of the ship concept – regulatory management and collection of wastes, the separation of the wastes on board, and utilization of the materials as resources – are particularly effective for these states, enabling waste management to be performed when not otherwise possible.
The ship-bound solution aims to systematically collect waste and separate it on board during loading, travel and unloading. Waste can then be handled on board through mechanical and biological treatment technology to produce secondary raw materials and energy through three main fraction groups, further contributing to the concept’s proposed sustainability.
The organic fraction group is converted by fermentation process into compost and biogas, which is then converted in a gas-operated power heat coupling plant to electric power and heat.
The light fraction group, converted similarly in a power heat coupling plant to electric power and heat, can be used to produce clean water, compost and electricity from waste resources.
Lastly, the heavy fraction group will load metal, electronic components and materials, etc. into containers to be sold for recycling. 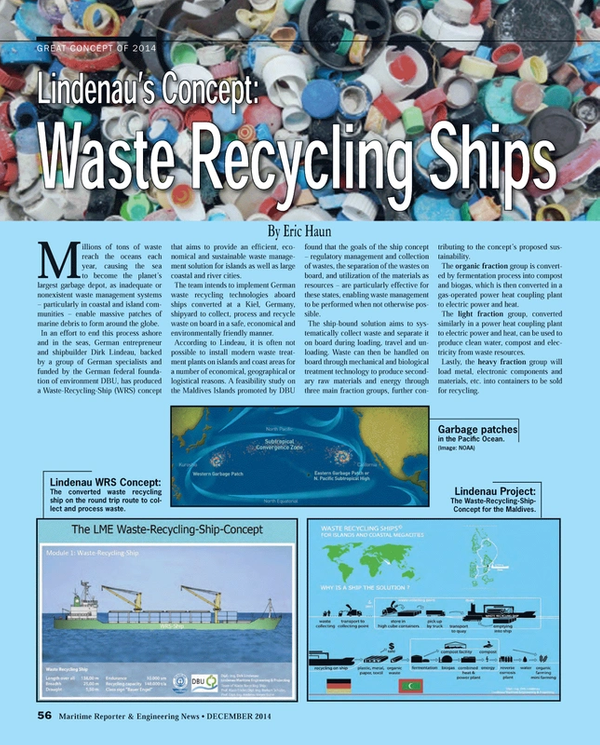